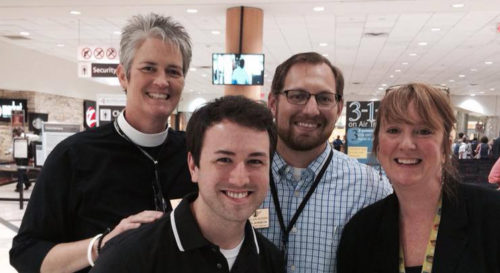 [Diocese of Atlanta] Three Episcopal seminarians from the School of Theology at Sewanee: The University of the South have begun 10 weeks as chaplains at the Hartsfield-Jackson Atlanta International Airport.

The seminarians are supervised by Episcopal priest the Rev. Donna Mote, a member of the interfaith chaplaincy at the Atlanta airport.  Mote is also assisted by two part-time ordained and one part-time lay chaplain.

Mote is one of three full-time chaplains at the airport, augmented by some 50 volunteers representing 10 faiths. The airport, the world’s busiest, serves over 225,000 passengers a day.

Atlanta’s Episcopal Bishop Rob Wright, who assigned Mote to the airport, said the Episcopal chaplaincy “is to be an active, visible and positive Episcopal presence at the world’s busiest airport — drawing the circle of inclusion wider, welcoming more people home to the Episcopal Church and representing the church and Christ in the world.”