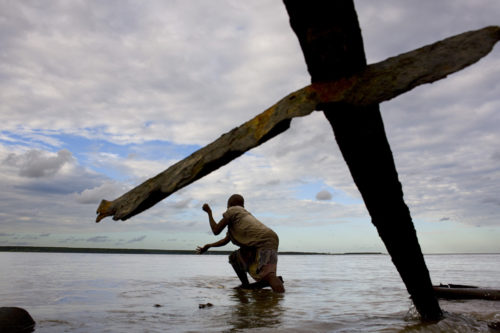 A Mozambique child casts a fishing net in the Zambezi River. The photo was taken during a two-month expedition down the Zambezi River to spread global awareness of malaria and mobilize donor support for effective protection and treatment. NetsforLife®, Episcopal Relief & Development’s program partnership, was one of the expedition’s sponsors. Photo: Marcus Bleasdale

[Episcopal News Service – Scottsdale, Arizona] If a picture is worth a 1,000 words, then a new traveling photo exhibition previewed here June 10 is a more-than 33,000-word photo essay about Episcopal Relief & Development’s 75-year legacy.

The 75th Anniversary Photo Exhibition shows the organization’s global reach of its mission “healing a hurting world,” as its tagline says, from China to Ghana to El Salvador to Louisiana to New Jersey, and points in between.

“As you look at the images in this exhibit, I hope what you’ll see are not images of something we do but images of who we are as one body, working with others around the world,” Diocese of Colorado Bishop Robert J. O’Neill, chair of Episcopal Relief & Development’s board of directors, told the church’s Executive Council, meeting June 10-12 in Scottsdale, Arizona. 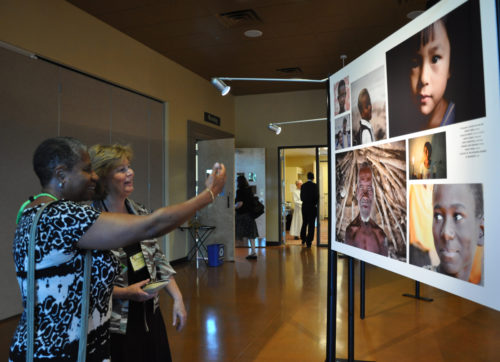 Council member Deborah Stokes of the Diocese of Southern Ohio (left) and General Convention Office Staff Assistant for Legislation Marian Conboy on June 10 discuss part of the Episcopal Relief & Development 75th Anniversary Photo Exhibition that was on preview at the Episcopal Church of the Nativity in Scottsdale. Photo: Mary Frances Schjonberg/Episcopal News Service

O’Neill said that the anniversary is a good time to take stock of the “collective witness” and work that has taken place since 1940, including the more than $560 million that has been raised and dedicated “to meet urgent human needs” all over the world.

In the last 14 years, he said, Episcopal Relief & Development has raised and spent more than $220 million, including $68 million for global needs, $69 million for disaster response and long-term recovery work, slightly less than $40 million for malaria prevention and $14 million for to promote health and alleviate hunger.

Those numbers, O’Neill said, reflect “what we can do collectively as we work in partnership with our sisters and brothers around the globe” in more than 40 countries.

“All of these numbers and figures tell a story about our collective heart,” he said, thanking the council and General Convention for the support it has given the organization.

O’Neill spoke during the announcement portion of a special Eucharist for members of the Episcopal Church’s Executive Council at the Episcopal Church of the Nativity in Scottsdale. The exhibit is on display at the church through June 12 and council members got a chance to view the exhibition during a reception that followed the Eucharist at the end of the first day of their three-day meeting here. The Rev. Susan Snook, Nativity’s rector, is a member of council.

During her opening remarks earlier in the day, Presiding Bishop Katharine Jefferts Schori called the exhibit “an opportunity to give thanks for the ways in which Episcopalians continue to partner with others here and across the world. God’s mission is indeed being served.” 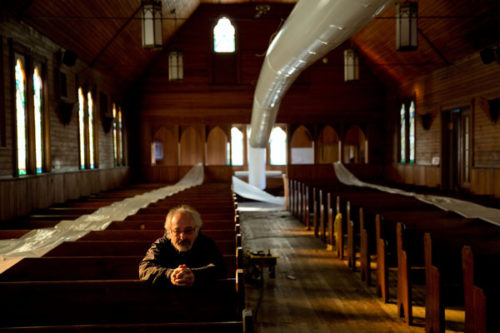 During Superstorm Sandy, the massive storm surge inundated the sanctuary at All Saints Church in Bay Head, New Jersey, hitting with such force that it caused the foundation to crumble. But even storm-battered congregations like All Saints found ways to minister to their communities in Sandy’s aftermath. As volunteer crews cleaned and repaired their church home, they found comfort and strength in each other’s company, and the congregation became more mindful of the most vulnerable in their midst. Episcopal Relief & Development provided emergency support to impacted dioceses for parish-based relief activities, helping congregations expand feeding ministries and provide shelter and transportation assistance for those in need. Photo: Marcus Yam

Details of the exhibition
The photographs are meant to portray Episcopal Relief & Development’s four core areas of work: alleviating hunger and improving food supply, creating economic opportunities and strengthening communities, promoting health and fighting disease; and responding to disasters and rebuilding communities. And they give context to its organizational story and its program partnerships with Anglican and ecumenical institutions around the world, and dioceses in the United States.

Two of the exhibit’s 22 panels feature a historical timeline showing the evolution of The Presiding Bishop’s Fund for World Relief to present day Episcopal Relief & Development.

The preview at Nativity allowed Episcopal Relief & Development staff members an opportunity to experiment with different configurations of the post-and-panel exhibit in a church setting.

Joanna Lehan, a New York-based curator, editor, and writer curated the exhibit. She has served as co-curator of the International Center of Photography’s Triennial exhibition. She has also worked as a book editor, Aperture Foundation, and a freelance photo editor at The New Yorker and Newsweek magazines. Lehan’s writing on photography appears on Time’s “Lightbox” blog, as well is in Photograph and Aperture magazines.

The exhibition’s travels will begin officially with an installation in New York’s Cathedral Church of St. John the Divine, including an opening event on Sept. 16. It is expected to visit more than 20 cities across the church. Among the planned stopovers are Los Angeles, Denver, San Francisco and Charlotte, North Carolina.

To inquire about having the 75th Anniversary Celebration Photo Exhibition to visit your diocese, contact Engagement Director Sean McConnell at smcconnell@episcopalrelief.org or call 855-312-HEAL (4325).

A virtual tour of the photo exhibition is available on a special 75th anniversary web section on Episcopal Relief & Development’s website at www.episcopalrelief.org/church-in-action/75/photo-exhibition.

Margaret Achieng Adie wheels a cart full of passion fruit seedlings to her plot of land. She purchased these from her 427-member agricultural co-operative, the Manywa Fruit Growing Self-Help Group, which started with support from Episcopal Relief & Development’s local partners the Anglican Church of Kenya and Anglican Development Services–Nyanza. The fruit she grows will provide her family with nutritious fresh food and a source of income from sale at the market. Photo: Mike Smith/Episcopal Relief & Development

Part of a larger celebration
Episcopal Relief & Development’s official celebration of its 75th anniversary begins in September but there are already resources and online tools related to the milestone available here.

The organization wants to use its anniversary to thank those who have been an integral part of its history, growth and success as the Episcopal Church’s international development agency. Episcopal Relief & Development also sees it as an opportunity to educate a new generation of friends and supporters about the agency’s life-saving work that reaches more than 3 million people annually in almost 40 countries, according to McConnell.

Episcopal Relief & Development plans a fundraising campaign to raise $7.5 million by the end of 2015 for programs that promote health, alleviate hunger and create economic opportunities.

Donors can make contributions to the campaign. Congregations, dioceses and groups are also invited to organize local fundraising campaigns and inspire others to participate. Online tools and resources are available on the website to assist with planning local activities and events. There are five campaign areas: 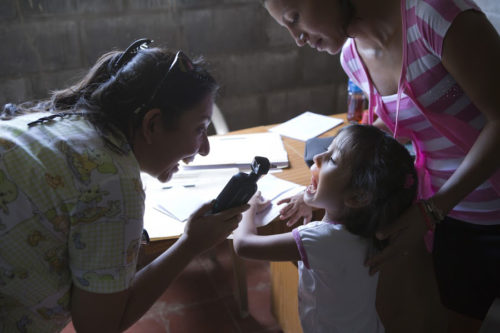 In addition to the photo exhibit, special web section and the fundraising campaign, other elements of the commemoration include: