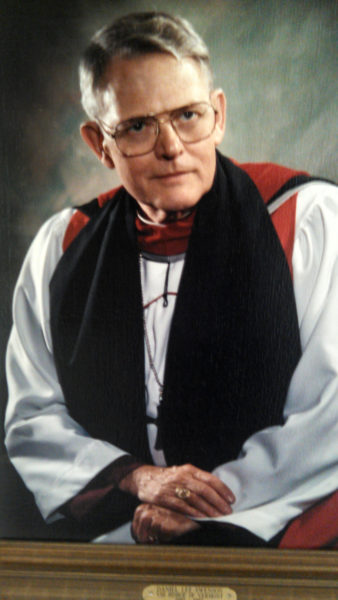 Swenson leaves behind family and countless friends whose hearts and lives have been warmed by his friendship and laughter. Following Swenson’s ordination in the Episcopal Church in 1960, he and his wife Sally lived in a number of towns in Minnesota including Minnetonka Beach, Wayzata, Virginia, Eveleth, Faribault, and White Bear Lake. In 1986 they moved to Burlington, Vermont, when he was elected the eighth bishop of the Episcopal Diocese of Vermont and was active in the wider Episcopal Church.

Following his retirement as bishop of Vermont in 1993, Swenson and his wife moved to Forest Lake, Minnesota. He was invited to serve as assisting bishop with the Rt. Rev. James L. Jelinek for 13 years. He knew the history of Minnesota and the Episcopal Church in Minnesota and was happy studying the Gospel of John and teaching. Having been raised in the shadow of the Holocaust and World War II, he worked passionately to educate and transform himself in the areas of institutional racism and civil rights. He was a strong advocate for the ordination of women, prevention of clergy sexual abuse and the full inclusion of gay and lesbian people.

In 2003, the Swensons relocated to Northfield to be closer to their family. There they were part of All Saints Church, Northfield, a community of faith that welcomed and embraced their presence and ministry. The Rev. Gayle Mardine Marsh is the rector at All Saints and was very close to the Swensons.