[Diocese of Los Angeles Episcopal News] Southland Episcopalians from Santa Barbara to Irvine were among thousands who gathered May 27 to remember and to honor six college students who were killed and 13 others who were injured during a deadly May 23 rampage in Isla Vista. 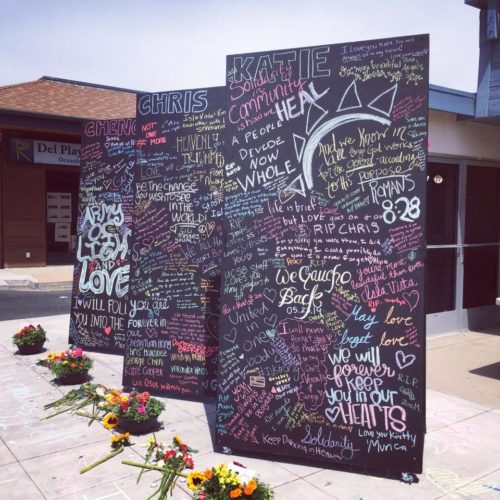 One of the many tributes to the murdered in Isla Vista, California. Photo: Nicole Janelle via Facebook

The Rev. Nicole Janelle, vicar and chaplain of St. Michael’s University Church and the Episcopal campus ministry at the University of California at Santa Barbara (UCSB), offered a final benediction to about 16,000 people at a Tuesday afternoon memorial service at the university’s Harder Stadium.

Invoking a spirit of healing and solace, strength and unity, Janelle called for “resilience in the face of violence and the courage to face that violence with resolve.”

“May we embrace our work as peacemakers, helping to nurture a culture of respect and loving compassion and a culture where there is ‘not one more’ in our community and in our world,” she added, echoing a rousing chant initiated by Richard Martinez, father of one of the victims, Christopher Michaels-Martinez, who also addressed the gathering.

He urged mourners to shout chant loudly enough, until Washington lawmakers could hear the cry of “not one more” senseless gun death.

Martinez and other UCSB students died when a local community college student, Elliot Rodger, embarked upon self-described “retribution” for feeling rejected by female students. Rodger detailed his intentions to target a UCSB sorority in a video and a “manifesto” posted on YouTube.

After fatally stabbing Cheng Yuan Hong, 20; George Chen, 19; and Weihan Wang, 20, Rodger shot and killed Veronika Weiss, 19; Katie Cooper, 22; and Michaels-Martinez, 20. Rodger continued his shooting spree and rammed others with his vehicle as he drove erratically across campus before dying of an apparent self-inflicted gunshot.

Irvine vigil: cherishing life, standing in solidarity
Students, staff and faculty at the UC-Irvine campus also organized an 8 p.m. vigil on Tuesday to express solidarity with the UCSB campus, according to the Rev. Hsin-Fen Chang, Episcopal chaplain.

The emotional vigil was “an opportunity for UCI students to gather and to honor the victims and to pray for their families and also for those who were injured,” said Chang.

She cancelled a regular bible study so that participants could attend the gathering, characterized by several speakers as an opportunity to cherish both life and one another, she said.

The gathering of about 500 also included several moments of silence in honor of the victims and their families. Many of the UCI students knew and recalled memories of the victims, she added. University officials offered counseling and other grief and wellness resources to students.

The Rev. Jim Lee, chair of the UCI Asian American Studies Department, said he taught at UCSB from 2004 to 2009, and has heard from colleagues who needed to talk about their grief.

“I’ve been keeping in touch with folks via social media and in many ways,” Lee told The Episcopal News. “I got a call from a former colleague wanting to reflect with me how he should respond to his class of 300 students; how does he engage students today on an official day of mourning where classes are canceled but the faculty is invited to be on campus to be available to students.”

He said that the community needs time to grieve before actively engaging some of the analysis already underway on social media regarding Rodger’s motives and background. Rodger had a history of mental and emotional difficulties and in April concerned family members had requested that local sheriffs conduct a welfare check on him. Sheriffs reportedly found nothing amiss.

“In a lot of ways, many of my non-UCSB-related people on Facebook and the like have been trying to reflect on how Mr. Rodger’s race and gender and his misogynistic rants in both the video and manifesto reflected deeper problems with misogyny and violence against women,” Lee told the Episcopal News. 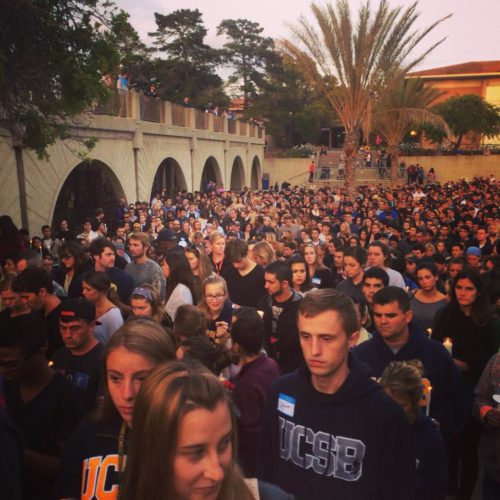 “My sense in conversations online with UCSB is, let’s not so much displace those questions or conversations but let’s bring to the fore the very real pain the folks are feeling in Santa Barbara.

“There’s a much more visceral response that wants to rally to make grieving central to that, at least as an initial response,” Lee said. “From my observations of UCSB, they’re trying to hold both as much space for grief, empathy and the like before going through any kind of social analysis.”

In Isla Vista, Janelle and others said the usually lively oceanside campus has been uncharacteristically quiet and somber and students spent Tuesday, a designated “day of mourning,” seeking solace and comfort in small groups.

Brian Granger, 43, a doctoral student in theatre who sings in St. Michael’s choir, said that a former student visiting from Los Angeles, identified as “Matt” on Facebook, was among those wounded in the shootings.

“He had gone to grab a drink and was standing next to someone who was killed on the spot,” Granger said. “He ducked behind a car and then ran into a nearby shop. When he got there he realized it was hard for him to move and at that moment, realized he was shot,” Granger said. The injuries were not life-threatening and following surgery his friend was released from the hospital on May 27.

Granger said the memorial service helped to begin the healing process and added that St. Michael’s “immediately opened the doors of the church and they’re still open. And we put signs up so people knew they could come and meditate or pray.”

Students, staff and faculty at UCLA also gathered to mourn and to show support in the wake of the violence. A candlelight vigil is planned for 8 p.m. May 28 at UC Riverside and the public is invited to attend.

Janelle said that a peace labyrinth, already under construction, will be dedicated on May 31 at St. Michael’s.

During the church’s regular Monday evening dinner for the homeless, participants lined up to paint “peace rocks” for the labyrinth. “We’re using that to create an activity to honor what’s happened in the last few days,” Janelle said.

— The Rev. Pat McCaughan writes for the Diocese of Los Angeles’ Episcopal News.