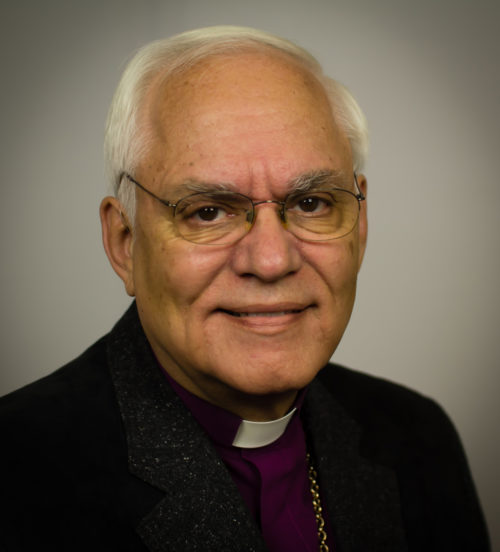 Bishop James Stanton retires after 21 years at the Diocese of Dallas.

Despite facing doctrinal disagreement and changing demographics, his robust legacy leaves behind a healthy, vibrant diocese for the next generation of leaders.

“It’s important to have new vision and energy for the future. It’s a great diocese with the potential to become greater,” Bishop Stanton said. “It’s time for new eyes and new ideas.”

His first month in office, during the Diocesan Convention, Bishop Stanton aimed to return harmony to the ranks by asking everyone to arrive in work clothes. Together they constructed two Habitat For Humanity houses, while at the same time hammering out the framework for relationships and trust.

“I wanted to focus on ministry,” said Bishop Stanton as he reflected on his early days at the diocese. “We can be very different in theology, but we can work together for good. We needed to enlarge the vision,” he said.

An active leader beyond the diocesan footprint, he also became a notable figure on the national scene. His emergence as point man for conservatism in the Episcopal Church catapulted Bishop Stanton into the limelight resulting in interviews with media outlets such as 60 Minutes, Newsweek and the Associated Press, to name a few.

“Bishop Stanton was a leader in the orthodox movement,” Dean Neil Michell said. “He will be remembered as a catalyst in the Episcopal Church and Anglican Communion to maintain fidelity to the apostolic faith. He drew people together as the theological voice for those who did not want to see the historical documents and practice of the church eroded.”

National media portrayed Bishop Stanton to be a stoic conservative leader with a public persona that those who knew him well say didn’t accurately match the man. Articles often characterized the bishop as a polarizing force while his actions in the diocesan theater showed him to be a skillful steward of unity.

The Church went through a difficult period when it consecrated its first openly gay bishop, causing many parishes to leave for another Anglican jurisdiction, said Father Mike Michie, vicar at St. Andrew’s in McKinney. When some churches left the diocese, it hurt financially and lowered moral.

“His chief legacy will be how he kept the diocese together through the difficult period when churches left and others wanted to leave. He really shepherded us through that time in history in a wonderful way,” Father Michie said. “If you look at us now, we are a strong diocese, we are together, we are growing and we pay our bills. A lesser leader would not be able to weather that storm.”

While the national instability of the Episcopal Church played an important role defining Bishop Stanton’s tenure, to many in the diocese his biggest contribution came from his strategic plan.

The strategy called for examining and evaluating every program in the diocese, and realigning resources to allow for stronger focus on church planting, youth programs, world mission and leadership development.

“The strategic planning process was his signature achievement,” Dean Michell said. “So much came out of it.”

For example, the diocese created a Church Planting Commission and provided seed money to establish successful programs. This resulted in several new churches, including four in the northern suburbs of the diocese, ethnically diverse urban churches in Dallas, and yet another in the more rural outpost of Wiley.

One of these churches, St. Philip’s in Frisco, has grown to 700 in attendance at weekend services. “We have planted more churches than any other diocese,” said Father Clay Lein, rector at St. Philip’s. “We’ve been able to grow our ministry because of his leadership as our bishop. We would not exist if it wasn’t for his vision.”

Bishop Stanton’s church growth efforts were an astute reaction to demographic changes, Bishop Suffragan Paul Lambert said. “Church planting is the lifeblood of any diocese. For many years we were behind the curve on that and now we are up to speed.”

Additionally, the diocese acquired Camp All Saints on Lake Texoma, to provide summer camp and other opportunities for youth and schools.

“You can provide more education and formation of young Christians during a week of camp than you can in a year or more of Sunday school, because they are living in community,” Bishop Stanton said. “Camp was a place where I met God and heard God’s call. It really was home for me when I was young.”

The bishop’s vision for a camp is part of his overall philosophy of identifying and raising leaders, Bishop Lambert said. “That’s where many young people commit to a relationship with Jesus Christ and the Church.”

While the camp served as part of his domestic mission efforts, Bishop Stanton also encouraged churches to engage globally. Those efforts have included mission outreach to Africa, Belize, and South America to name a few.

“He had a heart for mission of the church in its largest sense, and like the first bishop of the Diocese of Dallas, Alexander Garrett, he thought mission should be out in the world,” noted Bishop Lambert.

In preparing for the Lambeth Conference of 1998, Bishop Stanton invited 50 bishops to Dallas from around the world to build bonds of trust by study, prayer and discussion of common concerns. The bishops also became familiar with the legislative rules of the Conference so they could actively represent themselves in the future.

Teaching others to lead is another Bishop Stanton trademark, most notably in the formation of the Stanton Center, a school for laity and those preparing to be deacons.

“It’s a great resource for those who want to train for ministry in their local church, Father Michie said. “There are great classes to be had in biblical studies. Sometimes, Sunday school isn’t enough and people want a more academic route to their studies.”

Part of this legacy includes heavy focus on training leaders whether it is deacons, youth ministers, priests or other bishops. He also helped establish the Cranmer Institute, a center for Anglican studies at Southern Methodist University.

He furthered women’s ordination in the diocese without alienating parishes and splitting the diocese, Dean Michell said. He also championed deacons and made the diocese a model for others to follow. He loved to nurture priests to become confident, strong leaders in their own right.

“He was the reason I wanted to plant a church here,” Father Michie said. “He always trusted me as a leader of the church and his confidence helped me. He’s done a great job of merging his intellect with his faith and that is something I want to emulate more.”

Father Lein agreed that Bishop Stanton was a role model and said he cherished him as a mentor, “He has the willingness to empower people and give them permission to do the ministry God has called them to do. He empowers people and it makes a difference.”

When asked about his favorite accomplishments over the years, Bishop Stanton, says there are many, but noted that he fondly remembers the time he went to every parish and mission on a “listening tour” to take the pulse of the diocese.

“I had a lot of surprises,” he said. “The rural churches were much wiser. They lived with a lot of diversity issues but they managed to minister to each other, support each other and thrive without action of conventions. My successor needs to pay attention to what’s going on in the rural church. They are not big in numbers or money but they are big on Christian life and witness.”

For retirement, Bishop Stanton plans to spend time with his two children, their spouses and five grandchildren. He wants to archive family photos for future generations, travel domestically, teach theology at the Cranmer Institute and Stanton Center, and write.

His legacy will be looked back on fondly over the years, said Dean Michell. “He will be remembered as a Bishop-scholar, as a leader in the Episcopal Church and Anglican Communion, and as a larger than life figure.”

Bishop Stanton is not a man who seeks fussy attention or notoriety, but instead prefers to shine the light on others. Sitting in an easy-chair in his diocesan office he deflects questions about himself to instead thank others. Most notably, he thanks the people of the diocese for making his job easier.

“The people here are very optimistic and have a can-do spirit. Rarely will someone throw cold water on an idea,” he said. “They are open and that’s what I love about them. They are eager for the challenge and rise to the occasion. It’s been a pleasure.”