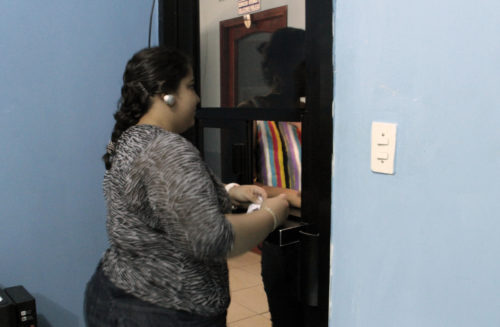 A woman working in the pharmacy at Siempre Unidos in San Pedro Sula dispenses medications to a transgender woman. Photo: Lynette Wilson/ENS

[Episcopal News Service – San Pedro Sula, Honduras] Some years ago a woman came to the Rev. Pascual P. Torres and said, “I am going to die.”

While she was a patient at a public hospital, she had been tested for HIV without her knowledge, then told the test results were positive. The staff told her: “You are going to die because you have AIDS.” The woman left the hospital and decided to jump off a bridge; she then remembered her 5-year-old daughter at home.

“She decided to kill her daughter first and then herself. But then she ran into a nurse … and she didn’t know if it was God or whatever, ” Torres said.

The nurse told the woman about Siempre Unidos, a ministry of the Episcopal Church in Honduras that provides medical care and comprehensive social services to people living with HIV and AIDS and their families.

“Ten to 15 years ago when people knew they were HIV positive, they tried to take their lives,” said Torres. “Now with information and education, things are better but it’s still not the best news to get.”

The woman looked healthy, though she persisted in saying, “I am going to die,” he said. “I told her that this [Siempre Unidos] was a place for those who want to live. ‘I can help you, I can spend all day with you, but if you have made up your mind…’”

Eleven years later, the woman is a technician at Siempre Unidos; her daughter is 16 years old.

Siempre Unidos began in the 1990s at a time when people in its support community were dying at a rate of nine per month and coffins were one thing the ministry provided.

“At the beginning of the pandemic it was bad,” said Torres during a conversation at the clinic in San Pedro Sula.

In 2003, when patents expired and drugs became more affordable and accessible in the developing world, Siempre Unidos began providing medication to treat the immune system disease.

Today, between 21,000 and 33,000 people live with HIV and AIDS in Honduras, population 7.9 million, according to UNAIDS statistics.

Siempre Unidos operates two additional clinics, one in Siguatepeque, in the central mountains, and the other in Roatán, the largest of Honduras’ Bay Islands, providing care for more than 1,500 people in partnership with the Diocese of Honduras.

The ministry receives medication from Honduras’ ministry of health, international pharmaceutical companies and from individuals in the United States who collect unused drugs, and depends on local and international financial support.

Each year, particularly in the aftermath of the global economic crisis, fundraising is difficult, said Torres.

“Also we have challenges with our beneficiaries: poverty, lack of work, malnutrition, drug dependency … Some don’t have money for transportation so we provide that,” said Torres.

Poverty, unemployment and underemployment are pervasive in Honduras, where the average adult has 6.5 years of education; despite health confidentiality, a positive HIV diagnosis makes finding a job even more difficult.

“It’s against the law to discriminate against a person who is HIV positive, but sometimes they’ll find ‘other’ reasons,” said Torres. “For a man or woman with HIV, it’s hard to find work.”

The waiting room in San Pedro Sula was two-thirds full of patients, men, women, transvestites, on a March morning; in the adjacent kitchen a traditional Honduran breakfast of baleadas was served.

For some, the breakfast, a folded tortilla with refried beans and crema, would be the only substantial meal of the day, said Torres.

Improvements in treatment, including the advent of antiretroviral therapy and other drug cocktails, have led to better outcomes, expectations and quality of life. Eventually, Siempre Unidos added integrated services for HIV- and AIDS-infected individuals and their families, including scholarships, pastoral care and educational outreach to the gay community and sex workers.

The country has one of the highest heterosexual transmission rates in the developing world.

Over the last eight years, in partnership with Episcopal Relief & Development, Siempre Unidos has run a community education and prevention program aimed at reducing the spread of HIV and other sexually transmitted diseases among commercial sex workers in San Pedro Sula, the country’s industrial center.

Honduras has the highest murder rate in the world; criminals and criminal gangs often operate with impunity; the marginalized, including the LGBT community, suffer greater incidences of violence. 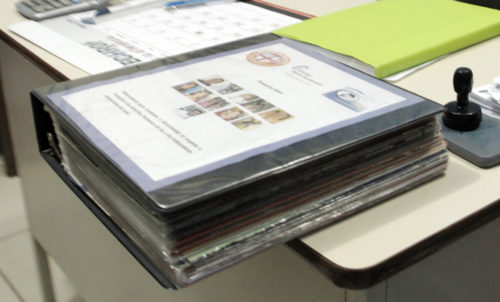 Local and international human rights organizations have thoroughly documented violations against LGBT individuals. Between 2009 and 2012 more than 90 homophobic killings were reported in Honduras.

Siempre Unidos receives patients at its clinic by referrals from hospitals and through word of mouth. The program designed to educate sex workers goes out to the streets, and the nurses and educators have gotten to know the people they serve.

“They are closer to the danger, they are exposed to drug dealers, extortion, and are being used by the gangs and the drug cartels,” said Xiomara Hernandez, who works with sex workers. “And the people who live in the streets are targets of the government when they want to do social cleansing.”

Because of its work with the LGBT community, Siempre Unidos has become a repository for documenting human rights violations.

“There’s a lot of hate crimes and social cleansing,” said Torres. “Our files of violence and hate crimes are better than those the police and state institutions have.”

The country’s Congress recently made changes to its penal code to “ensure legal protection against discrimination based on sexual orientation and gender identity.”

“The authorities ask us for information, but for us it’s also a very dangerous situation because of the corruption that exists in institutions,” said Torres.