[Church of the Redeemer press release] The Very Rev. Fredrick A. Robinson, Rector of the Church of the Redeemer in Sarasota, Florida, was honored and thanked for 20 years of outstanding service and leadership to the parish and the local community during an outdoor block party at the church on Friday, May 16.  Hundreds of parishioners and friends of the church attended the “Potluck on Palm” event on Friday, which featured a big-screen video presentation chronicling Fr. Robinson’s years at Redeemer.  The Right Reverend Dabney T. Smith, Bishop of the Episcopal Diocese of Southwest Florida, attended as well, and formally blessed a gift of a chalice and paten given by the parish to the church in Fr. Robinson’s honor. 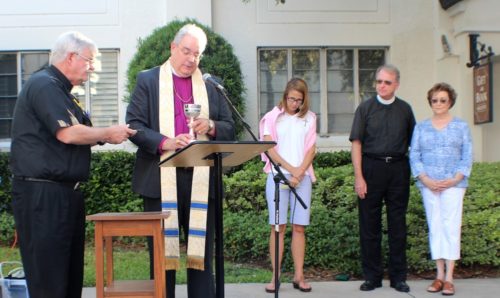 Bishop Dabney Smith blesses Eucharistic vessels given to given by members of Church of the Redeemer in Sarasota, Florida, in honor of their rector, the Rev. Fredrick A. Robinson.

Fr. Robinson’s long tenure has provided a stability and continuity in pastoral leadership rarely found among parishes of Redeemer’s size. Many staff members have been working for the church for 20+ years, and his Associate Rector, the Rev. Richard C. Marsden, whom Fr. Robinson hired in 1995, has been with the church for nearly two decades as well.

Under Fr. Robinson’s leadership, church membership has grown tremendously, leading him to establish positions for a full-time youth minister, a full-time priest in charge of the Hispanic ministry, and a Director of Children’s Christian Formation. The church has also expanded its schedule of worship offerings to include a Saturday evening contemporary service, and a Sunday afternoon mass entirely in Spanish.

Over the past 20 years, Fr. Robinson has been the guiding force behind a number of Redeemer’s ambitious outreach ministries.  He is currently the President of the Board of Directors for the ecumenical day center for the homeless, Resurrection House, which Redeemer helped found.  The walking of the Stations of the Cross down Main Street in Sarasota — a tradition begun by Redeemer 18 years ago, has grown into a partnership with the Downtown Ministerial Association that involves the participation of 60 area churches and faith-based organizations, as well as hundreds of participants from the community.  Redeemer is an active participant in Day of Hope each year, and at least once a year since 1999, the church has been sending mission groups of both adults and youth to serve those in need in the Dominican Republic; Fr. Robinson has participated in these trips nearly every year.

With Fr. Robinson at the helm, Redeemer has embarked on many significant improvements to the church facility and campus. The church added a second story to its parish buildings to accommodate the growing number of students in the church school, and in 2003 installed the massive 50-stop Nichols & Simpson organ which highlights Redeemer’s acclaimed Great Music in Sacred Space annual music series. The nave has been improved, new lighting and sound systems and stained glass windows were installed, and the church’s faith has been illuminated by the addition of several masterful works of art including life-size mosaics on exterior walls, and an interior thirty-foot icon painted by world-renowned religious iconographer and Romanian Orthodox Nun Sister Eliseea Papacioc.

Cultivating extensive adult education offerings and a developing a robust program for children, youth and families have been focal points for Fr. Robinson’s energies over the years.  To augment in-house programs, he regularly invites noted theologians, preachers and speakers from around the globe to speak to the parish on a diverse range of topics.

Fr. Robinson is the chairman of the Southwest Florida Diocesan Commission on Liturgy and Music; he also serves on the Board of Trustees for Nashotah House and as chairman of the External Affairs Committee for the school. In 2013, he was appointed Dean of the Manasota Deanery.

Prior to being called to Redeemer, Fr. Robinson served as Rector at Grace Episcopal Church in Monroe, Louisiana, and at St. Andrew’s Episcopal Church in Grand Prairie, Texas. He holds a B.A. in psychology from Ohio State University, a Magistri in Sancta Theologia from Nashotah House Theological Seminary and a Master of Theology from Perkins School of Theology. He lives in Sarasota with his wife, Linda; the couple has two children.