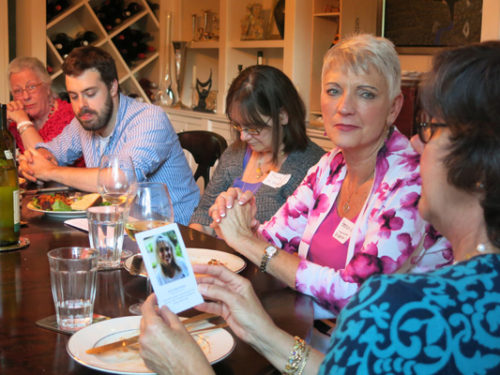 [Episcopal Diocese of Texas] Thousands of Episcopalians across the United States gathered in homes, restaurants and churches last Thursday, May 15, to share a meal and share stories of their faith. In the third year of Sharing Faith Dinners, the Dioceses of West Texas, Fort Worth, Northwest Texas, North Carolina and a few individual churches across the country and even Canada joined the Diocese of Texas for the annual event.

Sharing Faith began in 2012, fashioned after Houston Interfaith Ministries’ Amazing Faith Dinners, where people of different faiths gather for a simple meal and to answer questions about their faith experiences. The Diocese of West Texas joined in 2013 and the idea continues to spread.

“It’s funny that we have to plan an evening to talk to friends about our faith, but each time I’ve done Sharing Faith, it’s been a gift,” said Carol Barnwell, director of communications for the Diocese of Texas. “To enjoy the hospitality of people I may not know is always lovely. And to hear the very personal experiences of God from others is a humbling experience. Each time, I feel like I’ve received a gift and each story allows me to see God in a new way.” 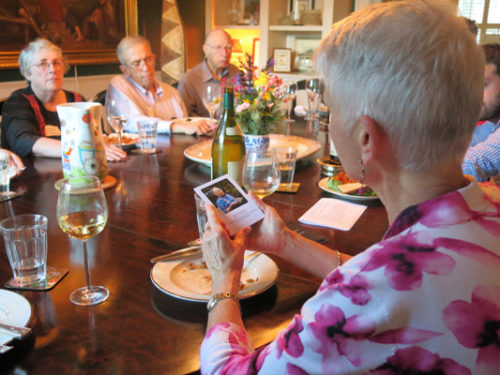 The evening is designed to promote listening. A moderator provides guidance for the group, allowing each person to speak without interruption or crosstalk. Every year, participants share stories of great joy and pain, moments when they questioned their faith, and moments when they were affirmed in their beliefs. Friends often share tears and laughter as they learn about each other in a new, deeper way.

At an event in Houston’s Montrose neighborhood, parishioners of St. Stephen’s and St. James’ Episcopal churches gathered at the home of Carvel Glenn and Randall Lamb. A dozen participants shared jambalaya around a table and then chose cards that prompted each person with a question.

“It was a night of sharing heartfelt stories and everybody was feeling safe enough to feel vulnerable,” Lamb said in his distinctive southern drawl. “It’s like one of our dogs, Aretha. She loves to have her belly scratched, and she will flop on the ground to expose her belly to be scratched. I guess everyone was just sort of flopping and having their belly scratched.”

Stephanie Davidson, a member of St. Stephen’s, attended her first Sharing Faith Dinner at the home of Lamb and Glenn. “I learned something from every single person there,” she said. “Normally I’m the kind of person that would interject, but the format really allowed me to listen and learn. I really felt God’s presence among us.”

In North Carolina, organizers designed their own question cards and named the event “Go Speak! Sharing Your Faith” in order to coincide with a wider diocesan theme. On the night of the gatherings, tornado and flood watches were in effect for much of North Carolina, but it didn’t seem to hinder participation. More than 40 percent of churches in the Diocese of North Carolina joined the event.

North Carolina’s communications coordinator, Summerlee Walter, said the feedback has been extremely positive, especially among smaller churches. “We have a lot of very small, rural churches,” she said. “A large percentage of those churches participated. It was really nice to have a diocesan event that didn’t require travel and allowed those smaller parishes to feel they were a part of the wider diocese.”

In a video posted by the Diocese of North Carolina, participants talk about their experience immediately following their dinners. One participant, Reid Joyner, admitted he had little experience describing his faith, but the environment helped him share. “The questions were really helpful for this Episcopalian that doesn’t find it particularly easy to talk about his faith,” he said. “But telling my story was easy, and I was glad to do it.”

In homes and churches, and other creative places, Episcopalians learned a great deal about each other as well as themselves through the simple act of sharing a meal and sharing their faith.

The Sharing Faith Dinners tradition will continue to grow in Texas and beyond. Visit epicenter.org/sharingfaith to learn more about the program. Or contact Carol Barnwell at cbarnwell@epicenter.org.