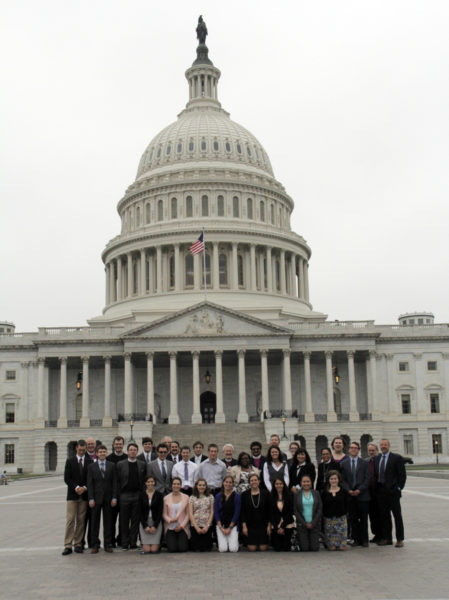 Fifty bishops and young adults, from 14 dioceses representing the Episcopal Church’s eight domestic provinces, gathered in Washington, D.C., May 12-14 for “Advocacy to Challenge Domestic Poverty,” a conference from an emerging generation of leaders to learn how to navigate the legislative process. Photo: Lynette Wilson/ENS

[Episcopal News Service – Washington, D.C.] Paddy Cavanaugh knows what it feels like to grow up in poverty and rely on food and other assistance.

One of two children raised by a single mother who worked as a teacher’s assistant, Cavanaugh’s family received support from the federal Special Supplemental Nutrition Program for Women, Infants, and Children, or WIC, and at times received rental assistance from their church and subsidized school lunches.

Yet growing up in Pasquotank County where 18 percent of the population lives below the poverty line and many people receive public assistance, Cavanaugh didn’t think of himself as poor.

A cradle Episcopalian, Cavanaugh, 23, now an undergraduate student at the University of North Carolina at Chapel Hill, shared his personal story during “Advocacy to Challenge Domestic Poverty,” a May 12-14 conference to train young adults in the skills necessary to transform unjust structures of society, frame the issues of domestic poverty and to stand with and be advocates for the poor.

Fifty bishops and young adults, from 14 dioceses representing the Episcopal Church’s eight domestic provinces, gathered in the nation’s capital for the conference sponsored by the Episcopal Church and Bishops Working for a Just World, a caucus within the House of Bishops devoted to fulfilling the baptismal covenant to “strive for justice and peace and respect the dignity of every human being.”

A handful of bishops make annual visits to Washington, D.C., typically in the fall, to meet with elected officials on legislative issues ranging from immigration to gun control to environmental protection, advocating positions supported by General Convention resolutions.

A few years in the making, this three-day conference marked the first time bishops organized the training for young adults; it wouldn’t have been possible without a Constable Fund grant, said Connecticut Bishop Suffragan James Curry, convener of Bishops Working for a Just World.

The Constable Fund provides grants for mission initiatives that were not included in Episcopal Church’s triennial budget. 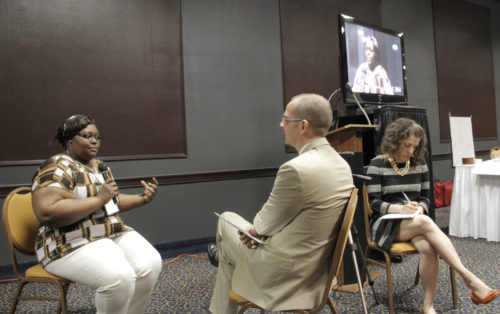 Ebony Richardson, a young adult representing the Diocese of Washington, practiced being interviewed on camera by Macky Alston, the interviewer, and Lida Masoudpour, the producer, who conducted the Auburn Media training. Photo: Lynette Wilson/ENS

Attendees, mostly high school and college students and a few young professionals, spent May 13 at the Capitol Skyline Hotel in a daylong media training conducted by Auburn Media aimed at preparing them to engage the media and to craft their core message through narrative, Christian values-based storytelling.

Following the media training, they learned about the federal budget process and the difference between discretionary and mandatory spending; the 2015 fiscal outlook; and the basics of lobbying in preparation to meet with elected officials from their home districts in South Dakota, Massachusetts, Minnesota, South Carolina, Michigan, North Carolina, New Mexico, New York and Texas.

“It really is what the church is about, equipping the saints to do work of mission,” Curry, who will retire later this year, said in an interview with ENS. “My hope is that this network can keep in contact across the issues and can build networks at home.”

Much of the work undertaken by the Washington-D.C.-based Office of Government Relations has a state-level component, such as the Affordable Care Act and Medicaid Expansion, said Jayce Hafner, domestic policy analyst.

“Advocacy is part and parcel of our mission and we believe we won’t be whole as individuals until every member of Christ’s body has the same opportunity to be whole,” said Hafner. “Legislation is a powerful vehicle for promoting health and wholeness in our communities.” 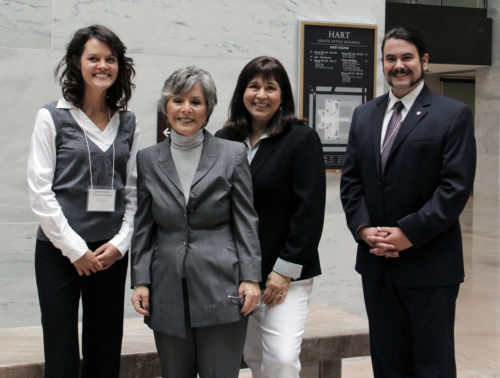 With the House in recess, bishops and young adults met with senators and their staffers to talk specifically about six poverty-alleviation programs in the discretionary budget: supplemental nutrition; Meals on Wheels and other community-based supports for vulnerable seniors; federal unemployment benefits and allowances; Head Start and other education programs; low-income housing assistance and homelessness prevention; and the Second Chance Act, aimed at helping formerly incarcerated individuals rebuild their lives.

“We’re here today to bear the Rock of Ages up this hill,” said Presiding Bishop Katharine Jefferts Schori in a May 14 sermon preached at the start of the legislative lobbying day at the United Methodist Building’s Simpson Memorial Chapel across from the Capitol. “All Jesus’ followers are meant to be climbing up the hill to spread a vision of eternal and abundant life. And we also claim the hope that there will eventually be an end to climbing up the hill.

“Remember that none of us goes alone to this task – we go in company, as part of the body of Christ, and the company of all faithful people seeking that eternal vision of holy and healed community.”

And as Bishop Stacy Sauls, chief operating officer of the Episcopal Church, pointed out during an address at the May 12 opening of the conference, relationships and solidarity with the poor precedes advocacy.

During the next day’s media training it became obvious that the young adults, whose adolescence has been marked by the Great Recession, had nailed the relationship and solidarity piece; like Cavanaugh, many shared candid firsthand experiences with poverty or their work with the poor and disenfranchised.

Dalton Wakefield, 18, of the Diocese of Dallas and a student at the University of North Texas, said he wouldn’t have been able to attend the conference; he also took offense to the use of the term “poor,” as a label. Later he explained that during the Great Recession, his family went from middle class to working class, a change in economic status that, he says, has forced him to “grow up” more quickly than he otherwise would have.

Ebony Richardson, 26, of Long Beach, California, who now studies mathematics at Howard University, represented the Diocese of Washington at the conference. During the media training she volunteered that her current success can be attributed to second chance programs in her home state.

“I got caught up with a bad crowd and went to juvy [juvenile hall]. I could say I didn’t know any better; it was all that I saw around me. But when I went to juvy, I realized I had to change my life,” she later explained in an interview with ENS.

Crime and violence dominate life in Richardson’s hometown, but despite falling in with “the bad crowd,” she was a high-performing student, and she credits the mandatory counseling she received in juvenile hall and government-sponsored after-school programs with helping her change her life.

“I was getting all A’s in school … but I needed an overseer [counselor] to tell me I could change my life,” Richardson explained.

It’s been 10 years since Richardson spent time in juvenile hall; her problems with anger and the subsequent acting out were not just personal, but community problems, and when she goes home now she sees what cuts to social programs, like the ones she benefited from, are hurting the community.

Bernadette Karpf, a high school senior representing the Diocese of Connecticut, over the last five to 10 years has witnessed the downsizing of mostly white-collar jobs in her hometown of Newington, a suburb of the capital, Hartford.

“Unemployment benefits have been a blessing to my family and my community,” she said.

Without unemployment insurance extensions, the long-term unemployed face losing their homes: when mom and dad can’t pay the bills, children end up homeless, said Rolf Lowenberg-DeBoer, missioner for community engagement in the Episcopal Church of Minnesota.

Even in Minnesota, a progressive state with a strong social net, children represent 46 percent of the homeless population post-Great Recession, he said.

As evidenced by the conference of bishops and young adults, the church has a responsibility to identify and develop new leaders in the church, said 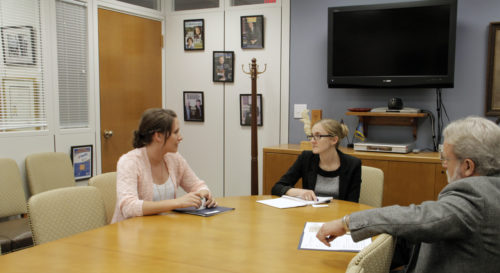 Cassie Boettcher, left, a young adult from the Diocese of South Dakota, and Bishop John Tarrant, met with Carrie Johnson, center, a legislative assistant in U.S. Senator Tim Johnson’s office on May 14 to talk about poverty in their state. Photo: Lynette Wilson/ENS

And as the Rev. Michael Angell, the Episcopal Church’s missioner for young adults and campus ministry, sees it, developing leaders is a way to bring millennials, the 80 million people born between 1980 and 1995, into the church.

Studies show millennials don’t see the church as either relevant to society, “all talk and no action” or they see it as too caught up in partisan politics. But in his experience with millennials, they have a “holy hunch,” meaning “the world as it is, is not the world that it should be.”

“There is a real sense for young adults that the church is a place where you can lead and get things done.”

In his teens, Cavanaugh said he became aware of his economic situation, but he also become aware of his social position, and that being poor, yet being a poor white male, gave him social capital and access to networks that other poor people in his racially mixed community didn’t have.

And once the family moved to Greenville, he saw a way of life different from the rural poverty of his youth. Still, he hasn’t turned his back on his roots; with scholarships and financial aid Cavanaugh is able to study history and Christianity, with and eye toward social justice and ordination.

“I feel like this is where I come from, and I have an obligation to help the community,” he said.