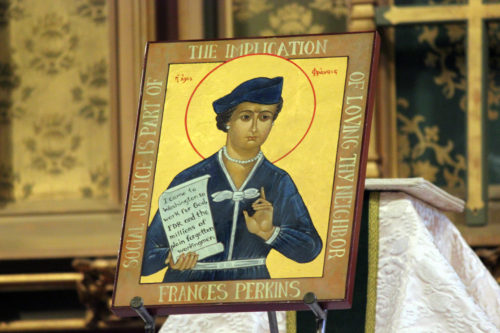 [Episcopal News Service] In her many different roles as public servant but especially as secretary of labor in Franklin Delano Roosevelt’s cabinet, Frances Perkins exemplified these words, working steadfastly and ceaselessly to ensure that the poor and needy in our land “be maintained in health and decency.”

“Like Jesus who fed the multitudes rather than turning them away,” the Rev. Lu-Anne Conner of St. Andrew’s Episcopal Church in Newcastle, Maine said, “when Frances Perkins saw the breadlines during the Great Depression, she understood that her work was to ‘go and do likewise.’” And she did – by helping to create Social Security, secure a minimum wage, shorten the work day and end child labor.

“Celebrating the [May 13] feast day of Frances Perkins,” said Conner, “is particularly meaningful at St. Andrew’s because Frances Perkins worshiped here for 60 years.

“This year our celebration was made even more memorable by the dedication of an icon, a gift of the Rev. Amelia Hagen,”added Perkins’ grandson, Tomlin Coggeshall, who is a St. Andrew’s parishioner and lives at The Brick House in Newcastle – the family home where his grandmother spent so much time.

“My grandmother would be both thrilled and humbled. The icon is absolutely beautiful. I feel that my grandmother’s persona will inhabit it more and more over time.”

Frances Perkins Center Executive Director Michael Chaney, who attended the dedication, said: “The Frances Perkins icon is a moving image that reminds us of how she placed her secular work in the context of working for God and for the greater good of all people.”

In 1905 Frances Perkins joined the Episcopal Church. For the next 60 years, she derived inspiration, solace, and courage from worship and contemplation to carry out her work and to face her personal struggles. During regular weekend retreats at the All Saints Convent in Catonsville, Maryland, she “spent hours pondering spiritual issues and how to lead a godly life in a secular world…. The nuns found her in the early morning hours in the chapel, praying on her hands and knees for guidance,” according to Kirsten Downey in her book about Perkins, The Woman Behind the New Deal.  In Washington, she often attended early morning services during the week at the Parish of Saint James (now Saint Monica and Saint James).

Icons as invitation to contemplation and action
Upon seen the Perkins icon for the first time, Heidi Shott, canon for communications and social justice for the Diocese in Maine, said it “gave me tender pause. This beautifully written icon is a tangible object to remind me of what is possible when we use our gifts for God.”

And that is exactly what their purpose is, according to iconographer Suzanne Schleck, who wrote the icon.

“Icons,” said Schleck, “are an invitation to enter into relationship with God.”

Creating them involves artistry and inspiration. The process allows the “icons to come through our hands. As layer upon layer of light is added, a face emerges from the darkness. In both form and content an icon is a parable of hope, and faith in the redeeming love of our God,” Schleck wrote on her website.

Creating the icon of Frances Perkins, Schleck found inspiration in the fact that Perkins “put her beliefs and faith into action so effectively.”

“Taking care of others,” said Schleck, “is her message to us. when I look at it, it makes me laugh! Yes! It’s possible. You can live that way!” 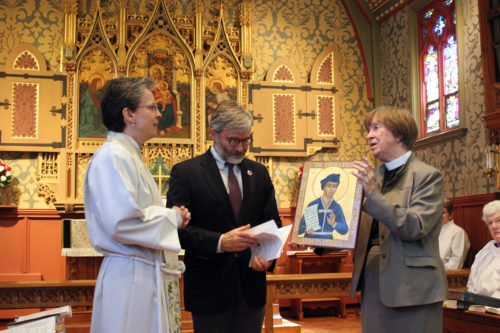 Biographer Downey said “It is fitting that Frances Perkins has been immortalized in an icon. She was a profoundly spiritual woman who constantly sought God’s guidance to help give every person in America, as she said, ‘the best possible life.’”

The Rev. Charles Hoffacker, a member of the Frances Perkins Center board of directors, commented that “it’s great to see an inspiring icon of this twentieth century saint.”

“Her apparel in the icon recalls what she characteristically wore, including her famous hat. The scroll features words with which she described her mission as United States labor secretary and as a Christian called to public service at a time of national crisis.

“Saints are reminders to us of how the reign of God is manifest in many times and places. A saint from our society, who lived not so long ago, is a challenge for us to realize God’s mercy is among us now and we are to live in accord with that mercy.”

A personal glimpse
Christopher Breiseth knew Frances Perkins well. They met when she was a visiting professor at Cornell University and a grandmother.

Breiseth, who chairs the Frances Perkins Center board of directors, was a graduate student and president of the Telluride House at Cornell.

He and his housemates invited Perkins to live with them at Telluride. Perkins gladly accepted, remarking to friends, “Do you know what those boys have done? I feel like a bride on her wedding night!” Breiseth said here.

Breiseth added that Perkins treated everyone with respect, even very tough political and labor leaders. There was an inner confidence combined with humility that reduced barriers, he said. She did not wear her spirituality on her sleeve but one knew in watching her day after day how profoundly religious she was.

The celebration of Perkins’ feast day continued down the East Coast on the route she so often traveled by train from Maine to Washington. Speaking at the Episcopal Chaplaincy Mass at Princeton University Chapel, Donn Mitchell, author of “Frances Perkins: Architect of a Gracious Society”, remarked, “The icon signals that the work and witness of Frances Perkins continues to bless us. I hope that it will also inspire us to emulate her steadfast love of the community.”

In Washington, D.C., Tomlin Coggeshall delivered the homily at an evening service on May 13 at the Parish of Saint Monica and Saint James, where his grandmother worshiped when in Washington.

Coggeshall also met with Secretary of Labor Thomas E. Perez. A portrait of Perkins hangs behind Secretary Perez’s desk. She is, he told Coggeshall, a “gold standard for labor secretaries.”

“Her portrait hangs over my desk, so that every day I can be inspired by the example she set and the legacy she left for the department,” Perez said in a statement later released by his office. “She is one of the most extraordinary women in American history, and a guiding light for us as we work to expand opportunity for all.”

— Christiana Adams, a parishioner at St. Andrew’s, is a communications consultant and ed