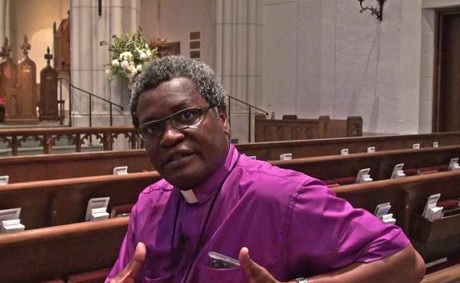 [University of the South School of Theology press release] The Rt. Rev. J. Neil Alexander, dean of the University of the South’s School of Theology, announced May 13 the appointment of the Rt. Rev. James Tengatenga, Ph.D., as distinguished visiting professor of global Anglicanism. Tengatenga will begin officially on July 1, 2014. He will teach courses in missiology, contemporary global Anglicanism, and related subjects.

“I am honored to be appointed to this position and it is my prayer that I will be able to share my knowledge and experience of the church, what God is doing with his people worldwide and the church’s role in God’s Mission,” said Tengatenga. “It is always an honour to participate in the formation of leaders. It is an invitation to participate in the future.”

In 2013, The School of Theology adopted a strategic plan that included a goal to establish shared programs and defined partnerships across the Anglican Communion.

First as a priest, and later as bishop of Southern Malawi for 15 years, Tengatenga has been a tireless advocate for human rights, particularly for youth and women. Within the broader African context, he has contributed positively to the ongoing conversations with respect to the full inclusion of gay and lesbian persons in the life of the church.

Tengatenga has been involved in HIV ministry as a member of the Malawi National AIDS Commission that coordinates the national response to HIV and AIDS.

Tengatenga resigned his position as bishop of Southern Malawi in order to accept a position as the dean of the William Jewett Tucker Foundation at Dartmouth College, a position for which he was eminently qualified as to his capabilities and character. Unfortunately, due to controversy created by third parties and persons, Dartmouth withdrew its offer. (The matter between Dartmouth and Tengatenga has since been amicably resolved.) He was soon thereafter appointed as a Presidential Fellow at the Episcopal Divinity School in Cambridge, Mass.

Upon hearing news of this appointment, Dr. Ian Douglas, bishop of the Episcopal Diocese of Connecticut, said, “Bishop James Tengatenga is one of the most significant Christian leaders in the worldwide Anglican Communion. He is passionate about and dedicated to God’s mission to restore all people to unity with God and each other in Christ. Sewanee will find in Bishop James a caring and pastoral presence committed to forming global Christian leaders. The University of the South will be blessed to have him on the Mountain.”

Tengatenga was born in Kwekwe, in what was then Rhodesia, on April 7, 1958. In 1979 he began theological training and priestly formation at Zomba Theological College in Malawi. He continued theological training at the Seminary of the Southwest in Austin, Texas, where he earned a master of divinity degree and was ordained a priest in 1985. He has done graduate work at the University of Birmingham in the United Kingdom and holds a Ph.D. from the University of Malawi, as well as honorary degrees from the Seminary of the Southwest in Austin, Texas, and The General Theological Seminary in New York City.

“The University is committed to serious scholarship and to the preparation of an educated ministry,” explains John M. McCardell Jr., vice-chancellor of the University of the South. “As part of our broader, long-range vision, we want to see students matriculating here from across the Anglican Communion. Dr. Tengatenga’s appointment underscores this global orientation as we seek to increase Sewanee’s diversity in both the college and The School of Theology.”

###
Sewanee: The University of the South comprises a nationally recognized College of Liberal Arts and Sciences, a School of Letters, and a distinguished School of Theology (seminary and The Beecken Center) serving The Episcopal Church. Located on 13,000 acres atop Tennessee’s Cumberland Plateau, Sewanee enrolls 1,550 undergraduates and approximately 170 seminarians in master’s and doctoral programs annually. Sewanee is owned by 28 Episcopal dioceses, the only university so directly related to The Episcopal Church.