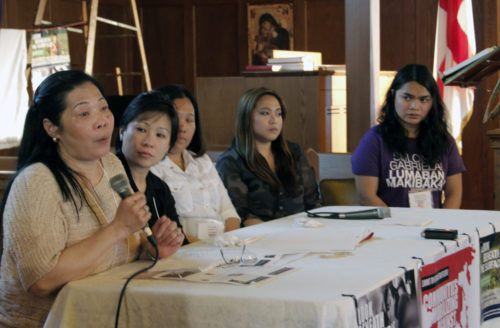 [Episcopal News Service] It wasn’t until border control agents picked up Ethel Paat that she realized she was the victim of a transnational crime.

A teacher with a master’s degree and a single mother of three, Paat arrived in the United States in October 2010. She’s just one of many Filipino women scammed since 2003 by a Philippines-based labor recruitment agency on the false promise of a high-paying teaching job.

Paat and other survivors of human trafficking shared their stories May 10 with the more than 100 people gathered for the Summit on Human Trafficking: Communities Mobilizing Against Modern Day Slavery, a daylong conference held at St. James’ Episcopal Church in Elmhurst, New York.

Organized by the Asiamerica Ministries of the Episcopal Church and the National Alliance for Filipino Concerns, the summit brought together religious and civic leaders, elected officials and the community to create awareness and to strategize involvement in the worldwide movement against human trafficking.

Also, the summit was a first step in creating the Asia-America Coalition Against Human Trafficking.

“We need to have a network with Asia and America, Asia being a sender and America being a destination,” said the Rev. Fred Vergara, the Episcopal Church’s missioner for Asiamerica ministries and the priest-in-charge at St. James.

Beginning with a U.S.-Philippines network, the hope is that the coalition will grow to include other sending countries in Asia, including South Korea and China, added Vergara.

Located in the western Pacific Ocean, the Philippines is a lower middle-income national that is home to 96.7 million people, 25 percent of them living in poverty.

High rates of poverty, unemployment and underemployment, and the confluence of natural disasters, like the devastating Typhoon Haiyan that in 2013 left 6,000 people dead and more than 500,000 people displaced in the Philippines, create exploitative conditions.

And despite the existence of anti-trafficking laws in the Philippines, lack of enforcement has not deterred trafficking, said Deserie Joy Arucan, the Gabriela Women’s Party national officer for education and training based in Quezon City, the largest city in the Philippines.

Arucan will serve as the fledgling coalition’s point person in the Philippines.

Worldwide, 21 million people, including 11.4 million women and girls, are victims of trafficking. The United States is a major destination country for men, women and children trafficked for the purposes of labor and sexual exploitation.

In 2000, the U.S. Congress enacted the Victims of Trafficking and Violence Protection Act in 2000. The act, which emphasizes protections for women and children, seeks to prevent human trafficking, protect its victims and prosecute traffickers; it was reauthorized in 2013.

Queens is the third most racially diverse county in the United States, with 22.8 percent of its population identifying as Asian-America and 27.5 percent as Latin. The borough sits at the western tip of Long Island and is the port of entry for both air and sea traffic into New York City. 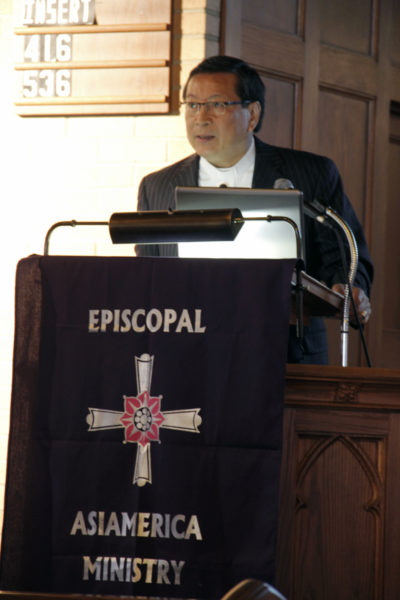 Human trafficking is ubiquitous and exists wherever there’s a demand for cheap labor and sex. People who’ve been trafficked typically work in restaurants, nail salons, massage parlors, on construction sites, explained the Rev. Raynald Bonoan, rector of Holy Spirit Church in Safety Harbor, in the Diocese of Southwest Florida.

Bonoan, who’s an active member of the Florida Coalition Against Human Trafficking, gave the summit’s keynote address, “A Christian call to take action against human trafficking.” People don’t seek help, he said, because they are ashamed, they feel isolated or confused, they don’t want to bring shame on their families, they’ve become dependent on their traffickers.

And it’s not uncommon for human trafficking to go unrecognized, as Executive Council Member Lelanda Lee, who chairs council’s Joint Standing Committee on Advocacy and Networking for Mission, explained following the survivors’ panel.

Lee and her family once assisted a family from the former-Soviet state of Georgia. The man, a former Olympic fencer, was brought over by a fencing club with the promise of a job that never materialized and Lee’s family helped the Georgians obtain work permits and green cards.

“What we never understood was that they’d been trafficked,” said Lee, adding that what she’d thought was an individual case was actually part of a larger systemic problem.

Lee and Episcopalians nationwide have begun to form networks and to mobilize around creating awareness of the existence of human trafficking and looking for ways to assist in eradicating it.

One tangible thing people can do is to listen with compassion to stories of survivors, Paat and others said.

In Paat’s case, the recruitment agency looked legitimate;  graduates from the Philippines’ top universities were paying up to $20,000, the amount Paat eventually paid, to come to the United States. Ignoring her mother’s pleas for her not to go and out of a desire to provide more for her parents and her children, Paat ignored her sense that something wasn’t quite right.

Then she arrived, there wasn’t a teaching job and life living under that radar began.

Rather than work as a teacher, she worked as a babysitter and was “forced to do unimaginable things,” she said in tears.

Once Paat was forced to share her story and she realized she’d been a victim of human trafficking, she was able to get assistance and learned that she may be eligible for a T visa, a special nonimmigrant visa for victims of trafficking.

“I truly admire the U.S. government because I never thought they’d be giving us this support,” said Paat, whose case has been filed and is waiting to be heard.