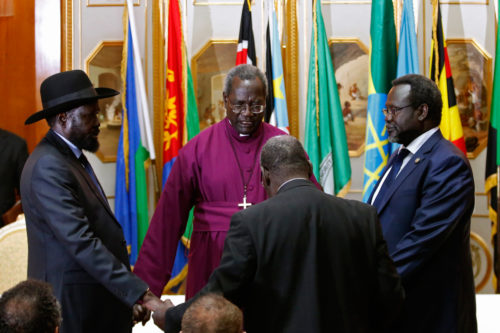 [Episcopal News Service] South Sudan’s political rivals have struck a new peace deal to end the five-month conflict that has left thousands dead and forced some 1.5 million people to flee their homes.

Archbishop Daniel Deng Bul of the Episcopal Church of Sudan and South Sudan departed early from a London meeting of the Anglican Communion Standing Committee last week when he was summoned to Addis Ababa, Ethiopia, to take part in the May 9 negotiations between South Sudan President Salva Kiir and his sacked former deputy turned rebel leader Riek Machar.

It was the first face-to-face meeting between the two rivals since the conflict erupted in December after Kiir accused Machar of plotting a coup d’etat. Deng led the two leaders in prayer before they signed the peace deal.

But despite the deal, fighting has continued throughout the Upper Nile and Unity states, with each side accusing the other of violating the truce.

Deng was appointed chairperson of the national reconciliation committee by Kiir in April 2013, a move that highlights the central role that the church plays in peacebuilding and helping to heal the mental wounds in South Sudan following decades of civil war with the Islamic north.

During the past five months, South Sudan has faced its greatest challenge since becoming the world’s newest nation in July 2011, when it seceded from the north in a referendum on independence.

As part of the May 9 peace agreement, both leaders have committed to forming a transitional government, the drafting of a new constitution and to new elections.

Presiding Bishop Katharine Jefferts Schori, who has called the Episcopal Church to prayer and action for South Sudan, told ENS May 9 during a break from the Standing Committee meeting that she sees hope “in the presence of Daniel Deng Bul in the midst of conversations, in the midst of challenges between political leaders in his own nation.”

Archbishop of Canterbury Justin Welby visited South Sudan in late January and witnessed some of the atrocities of the conflict. In an interview with ENS also on May 9 in London, Welby relayed his visit to Bor, in Jonglei State, where he said he saw hundreds of dead bodies lining the streets and where he consecrated a mass grave.

In the midst of evil, Welby said that he saw God “in the extraordinary fact that after half a century of civil war, and the hardening that that causes, that we could stand in Bor and see people weeping with compassion because the spirit of God still moves with love in their hearts.”

Deng’s role as chair of the reconciliation effort in South Sudan and in the May 9 peace talks in Addis Ababa “speaks volumes to the centrality of the church” in society and in peacebuilding, Welby said. It’s a church, “that has mobilized against despair … and is leading the struggle against violence.”

But even as the May 9 truce brings hope, church and world leaders warn that the task of building a lasting peace and rebuilding trust in South Sudan is daunting.

The U.N. has accused both the South Sudanese government and the rebels of crimes against humanity and estimates that five million people are now in need of humanitarian aid.

“The common people are the ones who suffer always and that’s very much the case in South Sudan,” said Jefferts Schori. “The displacement of people, the people who are starving, the children who are suffering in the midst of this. It’s a humanitarian disaster of the first order. I want to call the church to prayer about this until it is resolved.”

Richard Parkins, director of the American Friends of the Episcopal Church of Sudan, told ENS: “As we welcome the prospect of peace, let us understand that the cessation of hostility ushers in the opportunity to do some serious peace and reconciliation work to repair the deep mistrust among warring factions that this brutal conflict has produced. We must pray that the church, as the leader in rebuilding trust and fostering healing, will have the strength and wisdom to meet this daunting challenge.”

U.S. Secretary of State John Kerry, who was instrumental in bringing Kiir and Machar together, said the agreement “could mark a breakthrough for the future of South Sudan. The hard journey on a long road begins now and the work must continue.”

Gabriel Tor, a member of the Sudanese diaspora living in San Jose, California, has looked back on the last five months with despair and describes the peace agreement as “just a glimmer of hope in a desperate situation of crisis.”

Tor, who worships at Trinity Episcopal Cathedral in San Jose, told ENS in a telephone interview that he wonders if Kiir and Machar would be willing to step aside “and leave the government to the rest of the leaders in South Sudan for a long-lasting peace and reconciliation after the peace process has been finalized. Of course we don’t know yet, but only if the two leaders are committed to what they’ve signed, will the future [bring peace] for the South Sudanese people.”

Kiir is Dinka and Machar is of the Nuer tribe, representing the two main Sudanese ethnic groups. Although there have been some ethnic dimensions to the conflict, Tor and many fellow Sudanese, both Dinka and Nuer, share the same view that the disagreements have been primarily political rather than tribal.

Tor said that in many places in South Sudan, members of different tribes continue to live peacefully and attend the same churches. They have not been in conflict, he said, “because they realize that the issues are mostly political … But the abuse came when both men [Kiir and Machar] used their tribal names to establish their claims.”

But Tor also acknowledged that the situation is complicated, varies from region to region, and that it has been challenging for accurate information to reach all the communities of South Sudan.

Welby told ENS that although there has been an ethnic element to the conflict, “to simplify it to the degree of saying that it is a tribal conflict is insane. It’s a mixture of things … It has a very strong economic element. It’s very strongly to do with development and the allocation of resources within that development. It has a lot to do with issues of justice, of accountability, and non-impunity. And I think it has a lot to do with leadership. And there are probably a million other reasons I haven’t thought of and don’t know enough about. All I know is that when we simplify conflicts, we drive out approaches to resolution.”

The church has a presence in almost every community in South Sudan, with Episcopalians and Roman Catholics accounting for the vast majority of the population.

The Rev. Olav Fykse Tveit, general secretary of the World Council of Churches, visited Juba, South Sudan’s capital, in early May to meet with representatives of local churches.

In a recent statement, he stressed that the South Sudanese churches have “rich spiritual resources” and play “a significant role in national dialogue, affirming unity and a sense of nation-building by strengthening a process of reconciliation.”

“We will pray and work with the churches in South Sudan, while they continue addressing these struggles in their pilgrimage for justice and peace,” he added.

Long-standing partnerships with Episcopal dioceses and agencies in the U.S. have brought these issues closer to home. Churchwide advocacy and prayer has meant that the Episcopal Church and the Anglican Communion has found tangible ways to walk alongside its Sudanese brothers and sisters.

“The Episcopal Church has been integrally involved in this issue for several years,” Jefferts Schori said. “I would like Episcopalians to learn more about the situation, to be in contact with their legislators, to pray, and to reach out to the Sudanese in their own neighborhoods.”

Jefferts Schori was joined May 9 by heads of the North American Lutheran and Anglican churches in calling the church to prayer, especially as the Episcopal Church calendar commemorates the Martyrs of Sudan on May 16.

The Episcopal Church’s Office of Government Relations provided a template for an advocacy letter to U.S. President Barack Obama, urging him to support peace and reconciliation in South Sudan.

“Prayer at the very least changes our own hearts; it joins us to people who are in the midst of radical suffering; it’s a reminder that we are all connected, that we are all children of the same God,” Jefferts Schori said.

Asked why prayer is so important and what difference it makes, Welby said: “As we pray, our hearts and minds are shaped by the wisdom and power of the spirit of God, and as we pray we engage with God in the struggle against human evil … We must be battering at the gates of heaven in prayer; remorseless, unceasing prayer.”