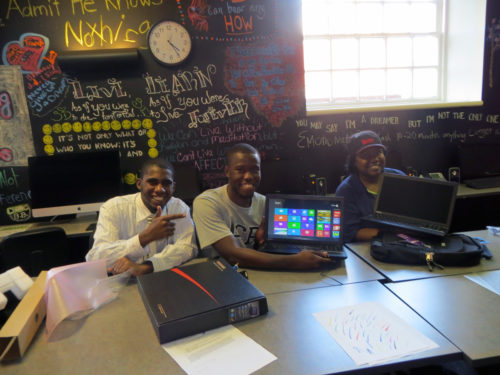 From left, Aquill Palmer, Tyron Morrison and Brittany Palmer show off computers provided to the Youth Center at Episcopal Community Services in Philadelphia thanks to St. Thomas Episcopal Church in the Diocese of Pennsylvania. Participants in the center’s program, which helps teens and young adults complete their education and find jobs, decorate the blackboard behind them with sayings and drawings. Photo: ECS

[Episcopal News Service] Tyron Morrison has plans: finding a job, attending community college, parenting his infant son, pursing a career in music. He also has faced challenges, including three years in a juvenile detention home, that not everyone can see past. He found the help he needed through the Youth Center at Episcopal Community Services in Philadelphia.

“Normally, other places that I’ve come in contact with, they tend to judge me off of … things that have happened in my life,” he said. “This program here, they accepted me with open arms. They listened to me.” He feels like he’s known center director Beatrice Fulton “all my life. … I feel really safe and secure.”

Across the country, Episcopal Community Services programs provide hands-on assistance to people needing a hand up. The organizations operate under various names, working independently from each other. Some are diocesan agencies, others separate nonprofits. Their common focus is poverty and those affected by it.

Through the Episcopal Community Services in America, a network of health and human-services organizations affiliated with the Episcopal Church, some of these agencies are working to strengthen their connections to share resources and raise the visibility of the work they do. In early June, representatives of ECSA and other related agencies will meet with the Rev. Canon Mark Stevenson, Episcopal Church domestic poverty missioner, in the Diocese of Western Texas to talk about ways to move forward.

“Over the years, many of the dioceses had multiple types of programs to help people who are destitute, who are homeless,” said the Rev. Canon Phillip J. Rapp, president and CEO of ECSA. “It’s a significant part of the heritage of the Episcopal Church. But in all that time, there never was an overall desk or agency … associated with the church that coordinated the activities.”

Thus, when the Journal of Philanthropy publishes its annual index of health- and human-service-based agencies, “when it comes to the Episcopalians, there’s just a [blank] line there because there is no composite knowledge of the amount of money that is spent on services, the amount of full-time employees that the church has in that related situation and, more importantly, I think, the amount and the diversity of … clients who are served.”

Twelve years ago, 14 or 15 agencies came together to form Episcopal Community Services in America, Rapp said. General Convention formally recognized the network in 2006, and the church provided a grant to develop a database of all the related agencies within the church, he said. ECSA identified 565 in more than 80 dioceses spending cumulatively more than $2 billion, but it ran out of money to continue or update the analysis, he said.

According to its website, ECSA’s vision is “to alleviate the systemic causes of domestic poverty and to help those in need by strengthening the work of Episcopal health and human-service organizations.” Three years ago, it supported a three-day conference in Newark, New Jersey, on the church’s response to domestic poverty. The June 5-6 meeting in San Antonio, Texas, will bring together Stevenson and members of various groups within the church, including ECS programs, the Church Pension Group, Jubilee Ministries and National Episcopal Health Ministries, to talk about ways to bring the ministries together and “to proclaim domestic action” against poverty, and programs that could be replicated and expanded, Rapp said.

Not just a safety net

In the Diocese of Pennsylvania, ECS has been reorganizing and reevaluating its programs to focus on finding and funding the most effective ways to alleviate poverty.

“The challenge is that the city funding and the state funding were going through tremendous change, and it’s pretty clear that that funding is volatile at best and nonexistent more than likely,” said Executive Director David Griffith ECS is preparing to launch a capital campaign and is creating two for-profit entities: consulting services to help parishes “build capacity and outreach muscle” and a home-care program, he said.

Two other focal points are St. Barnabas Mission and the youth program.

St. Barnabas is a shelter for abused young women with children that ECS hopes to expand into a community outreach program offering food banks, community centers, day care and housing, Griffith said. “A shelter is not the best way to cure homelessness.”

This reflects the general ECS vision: “We never want to be a safety net. We want to be a mechanism where we lift up and we lift out individuals in poverty,” he said.

The youth program uses a cognitive-therapy model to help 14- through 23-year-olds stay in school and find meaningful jobs with benefits, so that “they’re safe, they’re stable and … they become contributing members of the region,” Griffith said. 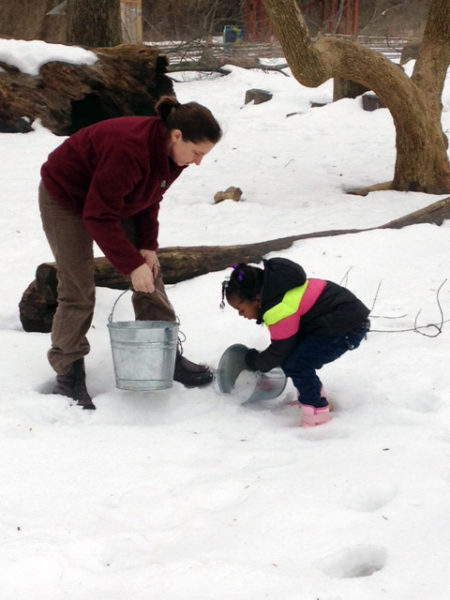 Youngsters in the Ark preschool for homeless children operated by Episcopal Community Services of Maryland had an opportunity to play in the snow during a monthly field trip to the Irvine Nature Center outside Baltimore. Photo: ECS

Fifteen years ago, ECS was providing grief counseling for families with AIDS, Fulton recalled. “The work was really about working with the families because the parents were dying, and sort of having planning for the teens, the children who would be left behind – who also had AIDS.”

ECS staff would make sure the teens kept appointments at the Children’s Hospital of Philadelphia. “One of the issues on the table when we’d go to these doctor meetings is, the kids were not taking their medications,” Fulton said. “We asked ourselves: What would a future look like that you’d be willing to take your medication? That was sort of the beginning of the vocational work we’re doing now.”

Today, young people who walk into the center complete a vocational assessment – identifying something they’re passionate about – and then look at the education they’ll need to achieve that kind of job. They learn to envision and articulate what a day on the job would be like: what they’ll do, what they’ll wear, who they’ll talk to. They discuss what would prevent them from obtaining this job and, using cognitive-therapy techniques, discern what they need to change in order to achieve their goals. “We get them to connect their thinking about the situation to how they’re feeling and, more important for our purposes, their behavior,” Fulton said.

Participants – more than 100 in the past year – also work on resumes, applications, proper work attire. Ultimately, they join the center’s 191 club, earning $100 for clothing and a $91 transit pass. Morrison recently picked out “nice dressy pants, some nice shoes,” a button-down shirt and a bow tie in preparation for an interview at a local McDonald’s. In the fall, he’ll begin studying at the Community College of Philadelphia.

Morrison, 21, arrived at the center about eight months ago on a friend’s recommendation. “I just needed a little bit more guidance and some information on how to approach certain situations, like filling out a resume,” he said. “The 191 program is … teaching you things that you’re really going to use in real life. So I’ve mastered it now. I can approach every situation with a lot of confidence.”

“The program is Mondays, Tuesdays and Thursdays. I’m here every day,” he said. “I love it. The atmosphere, it’s peaceful. I can laugh. I can be myself.”

Episcopal Community Services of the Diocese of Long Island also is reorganizing. It traces its origins to an upstate New York home for “wayward girls – basically unwed mothers” – and the parish-based Church Mission of Help network started by Holy Cross Monastery founder the Rev. James Otis Huntington and photojournalist Jacob Riis in 1913, said the Rev. Charles McCarron, ECS executive director and vicar of the Episcopal Church of St. Lawrence of Canterbury in Dix Hills, New York.

The network grew to about 20 programs across the church, with many changing their names to Youth Consultation Service in the 1960s. The Long Island mission underwent several name changes before becoming ECS – part of an effort to improve recognition for Episcopal service agencies – and five years ago shifted from an independent agency to a diocesan corporation, McCarron said. It now is restructuring, including looking at how ECS might work more closely with the related Episcopal Charities, which raises funds, and Episcopal Health Services, he said.

Through the years, ECS has introduced new programs to meet new needs. Following a devastating 2010 earthquake in Haiti, ECS trained volunteers to help Haitian nationals complete temporary protective status forms to allow them to remain and work in the United States.

After Hurricane Sandy hit the diocese in 2011, ECS worked with an evangelical congregation in the Rockaways (where there was no Episcopal church) to provide meals, set up job co-ops, run summer and after-school programs, and help day laborers from the mostly immigrant population to achieve OSHA certification to do construction work, McCarron said. In Mastic Beach, home of St. Andrew’s Episcopal Church, the diocese operated a weekly meal program and continues to host volunteer groups to help with construction and rebuilding, including working with the Poospatuck Reservation community. The diocese now is establishing a permanent program in Mastic Beach.

“As the Sandy needs are changing, we’ve just been awarded a grant from New York state to being kind of a youth center there and focus in on creating a mentoring program,” McCarron said. The $130,000, two-year grant will provide for a clinical social worker.

Episcopal Community Services of Maryland offers both vocational and children’s programs aimed “to help people navigate the obstacles of homelessness, poverty and re-entry into society.”

“We’re addressing the injustices brought on by severe poverty,” said Beth Margulies, communications manager. “All the programs are growing.”

That includes Jericho, a re-entry program for released state prisoners that focuses on workforce development and job placement. “When you’re coming out of a prison setting, you need several things … to make your new life work or to avoid recidivism, and one of the primary things you need is a job, so we start by focusing on really the work skills that you’re going to need,” Margulies said.

ECS has a commercial kitchen, which provides a job-training environment for Jericho participants. It recently partnered with a local nonprofit coffeehouse that focuses on helping unemployed local youth.

“They’re all kind of learning from each other, so we now have a social enterprise called Cups Coffeehouse and Kitchen, and we’re moving into event catering,” Margulies said. Students work on teams and take turns as sous chef, so on any given day a Jericho adult or an Urban Alliance youth may be in charge.

ECS also operates The Club at Collington Square, an after-school and summer-camp program for at-risk students, and the Ark, a preschool for homeless children.

Located in a city school, the Ark enrolls up to 15 children at a time. “It’s so clear to me that these children who come to our doors have some great potential, but they’re already behind,” said Director Nancy Newman. “They need a lot of stimulation and care to catch up.”

“We do see a lot of behavior challenges and developmental problems,” she said. “Most all of our kids are language-delayed. … After kids settle in, we do a developmental screening.”

The full-day program annually serves 40 to 45 children, who stay 16 weeks on average, Newman said. This accounts for a small percentage of the 450 children younger than 5 counted as homeless in Baltimore last year, she noted.

All services are free, including transportation, dental and other screenings, and daily breakfast, lunch and an afternoon snack. Once a month, the students and their parents take a field trip to a local nature center with an outdoor classroom.

“These children deserve the highest-quality care and education,” Newman said, “so they can move ahead and get past this traumatic period.”