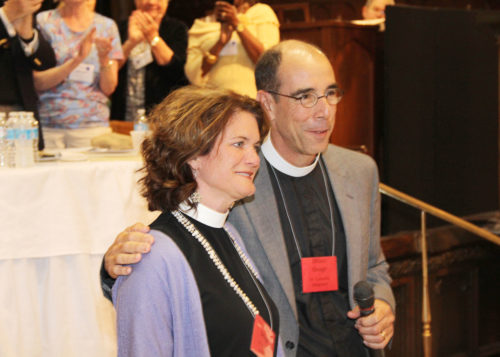 [Episcopal News Service] The Very Rev. Brian R. Seage was elected on May 3 as bishop coadjutor of the Episcopal Diocese of Mississippi, pending the required consents from a majority of bishops with jurisdiction and standing committees of the Episcopal Church.

The election was held during the diocese’s reconvened 187th annual convention at St. Andrew’s Cathedral in Jackson, Mississippi.

Pending a successful consent process, Seage will succeed the Rt. Rev. Duncan M. Gray, III, who will retire in February 2015.

Seage has been rector of St. Columb’s in Ridgeland since 2005. He holds an undergraduate degree from Pepperdine University and a Master of Divinity degree from the Seminary of the Southwest in Austin, Texas. He has been a priest since 1998.

From 1997-98, Seage served as curate at St. John’s, Ocean Springs, and then as rector of St. Thomas Episcopal Church in Diamondhead from 1998-2005, growing both attendance and programming in the parish. A successful building program was completed and average Sunday attendance doubled during his ministry at St. Thomas.

In 2005, Seage moved to St. Columb’s in Ridgeland, a rapidly growing area of the diocese. St. Columb’s attendance and programming has grown, and a large building project has been completed.

Before entering the priesthood, Seage served as director of youth ministry for St. Patrick’s Episcopal Church in his native Thousand Oaks, California, where he managed a team of volunteers to support both the junior high and senior high youth groups, assisted with chapel at St. Patrick’s Day School, and coordinated the congregation’s Habitat for Humanity program.

In the Diocese of Mississippi, Seage serves as a Fresh State Facilitator, a post he’s held since 2007. He served on the Executive Committee from 2006 through 2009 and was also part of the diocese’s Restructure Task Force. He has been a summer camp director at Camp Bratton Green each summer since 2006 and also served on the Gray Center Board of Managers. While at St. Thomas, he served on the board of trustees for Coast Episcopal School. He has also been part of search committees for leadership roles at Gray Center and Coast Episcopal.

He and his wife, Kyle, who is rector at St. Philip’s in Jackson, are parents to two daughters, Katie and Betsy.

The ordination and consecration is due to take place Sept. 27 at The Jackson Convention Center in Jackson, Mississippi. Presiding Bishop Katharine Jefferts Schori will be the chief consecrator.

“To be called to this office by the people of the Diocese of Mississippi on behalf of our Lord and Savior Jesus Christ is humbling beyond words,” said Seage. “The people of this diocese have ministered to my family and me in so many amazing ways. It is an honor to join with the faithful of this diocese in this new relationship.”

Information about all the nominees is available at the diocesan website.

The Diocese of Mississippi is composed of approximately 19,000 active baptized members worshiping in 83 congregations throughout the state.