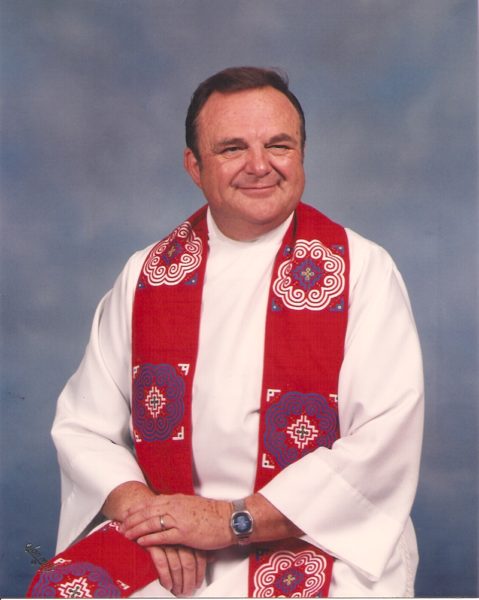 [Episcopal Diocese of Newark] It is with sadness that we share with you the news of the passing of the Rev. W. Alan King, age 81, on Maundy Thursday, April 17, 2014, in Edgewater, Florida. A Memorial Service is scheduled for Saturday, June 21 at 11 a.m. at Church of the Good Shepherd in Wantage at 11 a.m., Bishop Mark Beckwith presiding.

A graduate of General Theological Seminary, Alan was ordained in the Diocese of Newark in 1958. After 6 years serving both in the Dioceses of Western Michigan and Louisiana, Alan returned home to the Diocese of Newark as Rector of St. Martin’s Church, Maywood from 1964 until 1986. A dedicated pastor active in the community, he became a founding member, incorporator and treasurer of Lydecker Manor, Maywood’s senior housing corporation. Called to be Vicar of Church of the Good Shepherd, he left St. Martin’s as Rector Emeritus. During his tenure in Wantage he oversaw the relocation of the congregation and construction of the new church facilities.

Alan and his wife Audrey retired to Florida in 1995. In 2002-2003 Alan served as Interim Rector of his local congregation, St. Peter the Fisherman, New Smyrna Beach, Florida.

Alan served in numerous leadership roles in the diocese: among them Diocesan Council, the Commission on Evangelism, longtime chairman of the Finance Committee of the Department of Missions, and Chaplain at Eagles Nest Camp. He was honored as Canterbury Scholar, and he also served 5 years as Bishop’s Deputy for Asian Ministries. He was for many years an officer of the Advisory Board of the Holley Childcare Center in Hackensack and subsequently was elected to the Board of Trustees of the Youth Consultation Service. Alan maintained his ties to General Seminary. He was for 12 years a member of the Executive Committee of the Associate Alumni/ae then elected as Alumni/ae member of the seminary Board of Trustees.

The family requests that any memorial donations be made to:

Good and gracious God, the light of the faithful and shepherd of souls, you sent your servant Alan to be a priest in your Church to feed your sheep with your word and to guide them by his example; give us the grace to keep the faith he taught and to follow in his footsteps. We entrust him into your unfailing mystery of Love and Hope through Jesus Christ our Lord. Amen.