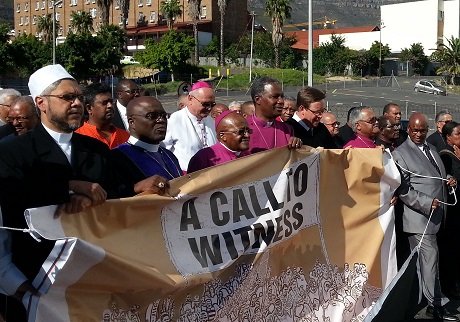 [Anglican Communion News Service] The Church in South Africa is “reclaiming its prophetic vocation,” according to its Anglican primate, Archbishop of Cape Town Thabo Makgoba, in a statement made in his latest letter To the Laos (the people).

“Since Holy Saturday, when religious leaders carried out a walk of witness to demand transparent governance and accountability, I have been reflecting on what it is to be witnesses to God’s love in the world,” he wrote.

“I am grateful that the church at large is reclaiming her prophetic vocation, committed like Christ to demand justice,” said Makgoba. “It will not be easy but in Christ we trust and have our confidence and assurance.”

Drawing from a Bible story of restoration and liberation, the archbishop warned: “It is easy to forget the exile experience. It is easy to be seduced by power and wealth as well as status and forget God and the poorest of the poor. It is easy to turn a blind eye even if we have eyes to see.”

The archbishop reminded South Africans about the need to celebrate the country’s 20 years of democracy. “There is much to celebrate. There is indeed a good story to tell,” he said. “Today we can celebrate above all our constitution, which guarantees us nearly everything else we laud as achievements.”

“The right of black people to vote, equal rights for all individuals black or white, the provision of housing, sanitation, water and electricity and the independent institutions set up to guard democracy and promote good governance.”

Despite the achievements that South Africa has made over the years, the Archbishop expressed his shock at the levels of inequality in society. He pointed out the huge disparities that exist between the wealthy parts of their cities and the rest of the country.

“We live with massive disparities of income, largely based on race but increasingly based on whether you have made it into the middle class,” he said. “Black economic empowerment in many instances is contributing to inequality rather than closing the gap between rich and poor.”

Makgoba said that someone’s opportunities in life still often depend on who their parents are and whether they are privileged or not. “If you are poor, the chances are that you will struggle to escape the kind of lives your parents lived,” he said.

On April 19, the Anglican Church of Southern Africa held a “procession of witness” to mark the 20th anniversary of the birth of South Africa’s democracy and also express concerns over issues affecting the country.