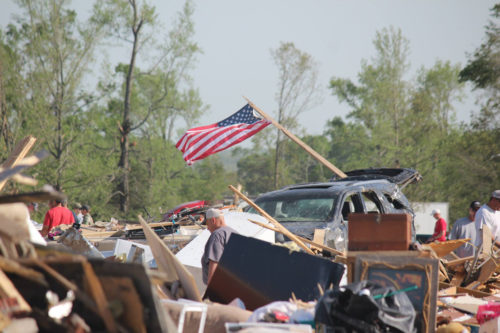 [Episcopal News Service] Episcopal Church dioceses and congregations are helping their neighbors cope in the aftermath of deadly spring storms that lashed a wide section of the Midwestern and southern United States and killed at least 34 people, 15 of them in Arkansas.

Episcopal Diocese of Arkansas Bishop Larry Benfield said April 28 that the diocese’s Disaster Relief Team is already in action. Ginger Bailey Bankston of Christ Church, Little Rock, is a member of that team and is coordinating the diocese’s response in concert with other groups.

She said that “the areas most affected have been sealed off to keep unnecessary people out of the way who might hamper relief efforts,” according to Benfield. Officials in the areas are assessing exactly what residents needed, the bishop said.

The Rev. Teri Daily of St. Peter’s Church in Conway, Arkansas, located just west of hard-hit Vilonia and north of Mayflower, which was also severely damaged, is working with a shelter for storm survivors that has been set up at Antioch Baptist Church. The church is between Mayflower and Vilonia. People at that shelter say that they are still assessing the immediate needs and will get back with Daily as soon as they know what help they need, Benfield reported.

St. Peter’s opened its doors at noon and again at 7 p.m. April 28 to host prayer services for the victims of the storm, according to a post the church’s Facebook page.

“We are already hearing that the best way to help immediately is likely to be financial support so that relief workers can buy in bulk any relief kits that are needed,” Benfield reported, urging diocesan members who wished to help with relief work to donate online to his Bishop’s Discretionary Fund. “My office will then distribute it to the local churches and shelters as Ginger Bailey and her team inform us of the needs of each location.”

Late on April 28, Alabama Bishop Kee Sloan and Assistant Bishop Santosh Marray noted (http://www.dioala.org/) that “devastating tornadoes and thunderstorms are sweeping across our state this evening. They have already caused destruction, injury, and loss of life.”

“Your bishops want you to know that we are praying for your safety and for the safety of your loved ones,” they wrote on the diocese’s home page, also posting a prayer and Psalm 46.

The storms began April 27 in Oklahoma and Arkansas and moved east through Mississippi, Alabama and Tennessee. The Associated Press reported that at least 15 were killed April 27 as the tornado blasted through Arkansas. One person died in Oklahoma, and one in Iowa.

The storm struck Vilonia, Arkansas, nearly three years to the day after the town of 4,000 north of Little Rock was hit by another killer tornado that left four people dead.

The entire region is on edge as warnings of bad weather continued on April 29 and news reports recalled that it was the third anniversary of a historic outbreak of more than 60 tornadoes that killed more than 250 people across Alabama on April 27, 2011.

AP reported that 12 people died in Mississippi, nine of them in hard-hit Winston County, on April 28. Three others died in separate instances of vehicles being blown off roadways.

In Alabama, three people were reported dead, two in the northern part of the state and one in Tuscaloosa. There, officials say a University of Alabama student died when he took shelter in a home’s basement and a retaining wall collapsed on him, according to the AP. The Clarion-Ledger newspaper in Jackson, Mississippi, reported that the student, Tupelo native John Servati, held up the retaining wall long enough for his girlfriend to escape.

Tennessee officials say two people died in a home when a suspected tornado hit during the night on April 28.

Episcopal Relief & Development said April 29 that it is in contact with diocesan leaders in tornado-impacted Arkansas, Mississippi, Alabama and Oklahoma, and encourages prayers for all those affected.

“We are working with our Partners in Response team to reach out to diocesan disaster coordinators and offer support as they help churches with the first stages of their tornado response,” said Katie Mears, director of the organization’s US Disaster Program. “Right now churches are checking in with their members and assessing damage in their communities.  Some are already seeing an increase in people accessing existing support ministries such as meal programs.  We anticipate that these needs will increase in the coming days and stand ready to provide assistance as the dioceses develop their response plans.”

The members of All Saints Episcopal Church in Tupelo, Mississippi, April 29 were checking in with each other at the invitation of the Rev. Paul Stephens, rector, via the parish’s Facebook page the day after the city was struck by what may be the strongest storm that hit the state April 28.

Parishioner Stan Furr reported on Facebook that his wife Lynda survived that tornado at home, while “I was in press pit with 4 to 8 ft of concrete and steel all around me approximately 30 to 40 feet deep. If any one needs anything let us know.” [A press pit is a sub-basement of sorts that is part of the foundation on which a printing press sits.]

Teenager Kamme Riddle checked in with this post: “We are ok. Have 2 friends who have lost their homes, but nobody was hurt. Y’all ok?”

All Saints will host a community prayer service for the City of Tupelo and its storm victims April 30.

The Diocese of Mississippi posted a prayer for the storms’ victims on its Facebook page.

In Kansas, 34 people were injured, but no one was killed, when a tornado hit Baxter Springs late in the afternoon April 28. About 100 homes and businesses were damaged in the town west of Joplin, Missouri, which is still recovering from a devastating tornado that hit the city in late May 2011.

“The immediate concern is for the rescue efforts now taking place,” Diocese of Kansas Bishop Dean Wolfe wrote to the diocese. “We pray for the victims of this terrible storm, as well as for the first responders who are caring for them.”

Wolfe said he had spoken earlier in the day with Bishop Benfield in Arkansas and Bishop Ed Konieczny of the Diocese of Oklahoma “to extend my prayers and support on behalf of our diocese.”

Wolfe asked Kansas clergy to include the storm victims in the Prayers of the People this coming Sunday, and requested that each parish in the diocese take up an offering that day to be sent to Episcopal Relief & Development, which he said “has done such solid work in caring for the victims of floods and storms in our diocese in the past.”