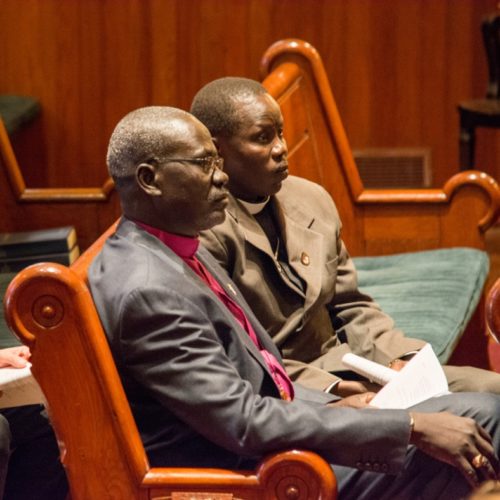 [Episcopal News Service] Members of “the network” ring in faithfully every Friday; a dozen or more callers from across the Anglican Communion with a common mission: to support and advocate for the people of South Sudan.

“Our concern as southern Sudanese, and as church leaders, is how to stop this war. Thousands of people are dying,” Bishop Joseph Garang of the Diocese of Renk told others on the group’s April 25 conference call, facilitated by the Rev. Ranjit Mathews, the Episcopal Church’s officer for global relations and networking.

“I want to appeal to you, brothers and sisters, that even more important than relief [efforts] is to end this war,” added Garang, who was visiting the Diocese of Chicago, with which his Diocese of Renk shares a companion relationship. “In Renk now there is fighting and a lot of tension … There is fear. We are trying with local resources to keep the peace in the country. People have come from the fighting in Malakal, and that same spirit of fighting has spread.”

Reaching across time zones and continents – including Anglicans and Episcopalians from the United States, South Sudan, England, Australia and Canada – the weekly phone-meetings emerged spontaneously after the Dec. 15 deadly clashes escalated to ongoing armed conflict between the South Sudanese government and rebel supporters.

Now, the network hopes to raise public awareness and galvanize action with an urgent message to help “stop the genocide in South Sudan.”

Companion relationships spawned ‘old school’ communications
The network doesn’t really have a formal name but includes individuals, dioceses, agencies – those who share a love for South Sudan and its people and who want peace for the beleaguered nation, Mathews said.

Canon Jackie Kraus, a member of St. Michael’s Church in Barrington, Illinois, in the Diocese of Chicago, said she fell in love with Sudan and its people during a 1998 visit.

That friendship evolved into companion relationships between the dioceses of Renk and Chicago, where 120 people attended an April 28 afternoon prayer vigil at St. James Cathedral to “pray for peace.”

“This vigil comes out of relationships with our friends in Sudan … When people we know and love are in danger, we can do three things: we can pray, we can bear witness, and we can give them our financial resources,” said the Rev. Bonnie Perry, rector of All Saints Church in Chicago, which has sent more than $170,000 to the Diocese of Renk since 2004.

“Right now, the church in Renk is overwhelmed by the needs of internally displaced people and returning refugees. They need all three kinds of help from us.”

Several other Chicago-area parishes have entered companion relationships with South Sudan, said Kraus, a founding member of AFRECS, the American Friends of the Episcopal Church in Sudan, an advocacy agency whose executive director Richard Parkins also participated in the April 25 meeting.

Both expressed frustration on that call at the lack of public awareness for what’s happening in South Sudan.

While praising the network’s efforts, Kraus pushed to take the message public, citing a lack of media coverage of the South Sudan crisis “and in the meantime Rwanda is happening in South Sudan. We said we didn’t want that to happen again. Why aren’t we hearing that message?”

Parkins agreed. “I’m still amazed that there is little known about what’s going on in South Sudan. At a meeting, a woman next to me said she didn’t believe there was a Christian presence in South Sudan. There’s still a lot of ignorance. How do we do a better job of galvanizing this issue among our faith community?”

What’s happening in South Sudan?
After decades of civil war with the northern region of the country, South Sudan emerged as a separate nation in 2011. But political tensions boiled over when President Salva Kiir dismissed Vice President Riek Machar and fighting erupted Dec. 15 between their supporters. Some intertribal fighting also ensued; Kiir is Dinka; Machar, of the Nuer tribe.

A Jan. 23 ceasefire agreement failed; thousands have been killed, and nearly one million people displaced, according to an April 27 report from the United Nations Office for the Coordination of Humanitarian Affairs (OCHA).

Still, the news from Bishop John Gattek of the Diocese of Malakal, also present on the April 25 call, was hopeful.

Officials had dropped treason charges against four political detainees accused of attempting to topple the government, thus paving the way for ceasefire negotiations to begin. Still, another opposition demand, to withdraw Ugandan troops from the country, has not been granted, he said.

“A relief corridor has been opened from Ethiopia. This is good news,” Gattek said. “It goes through government and rebel-held territories.” He added that details were sketchy about what happened in Renk, where fighting erupted April 23, forcing people to flee to safety.

Translating ‘old school communications’ into action
The network started with e-mails from Robin Denney, an Episcopal Church missionary and agriculture consultant to the Episcopal Church in Sudan from 2009-2011, and Buck Blanchard, director of mission and outreach for the Diocese of Virginia, who has been involved in Sudan for more than a decade, Mathews said.

“We saw what was happening in Sudan, and got Richard Parkins [AFRECS executive director] involved,” he recalled.

Now the weekly meetings are “old school communication” and a model for other ministry, Blanchard said.

“This way, on a regular basis we have folks from the United Kingdom, Australia and bishops from South Sudan weighing in with real time information on what’s happening on the ground, so everybody gets up to speed at the same time. And if fundraising needs to be take place or some prayer or other action needs to happen, we can take care of it,” he told ENS recently.

“I do a lot of this work with all kinds of mission efforts in various countries around the world, and I tend to think I’m from the Diocese of Virginia and we do x, y and z. Other dioceses are there yet very rarely do we get on the phone and say, lets all talk about what everybody else is doing so we know and can lend support and so we don’t duplicate efforts.”

Julianne Stewart, program director of the Anglican Board of Mission (ABM) in Australia said she got involved because the network offered “good, up-to-date information about events on the ground in South Sudan from members of the church” not necessarily available elsewhere.

The ABM has been working in partnership with the Diocese of Salisbury in the Church of England, where the Rev. Canon Ian Woodward serves as vice chair of the diocesan partnership link with the Episcopal Church in Sudan and South Sudan.

Together, they have helped facilitate development of theological as well as secondary education in South Sudan and engage advocacy work with British politicians regarding the world’s newest country.

“We are working hard to support the humanitarian efforts … with AFRECS,” Woodward said in an e-mail to ENS. “We are also seeking to help the front-line bishops who, because of the current conflict, are unable to be in their dioceses and need help to support their families and flocks,” he said.

Buy a heart, share love with South Sudan
Bishop Cate Waynick, a network member whose Diocese of Indianapolis began a three-way companion relationship with the dioceses of Bor and Brasilia in 2002, called the recent developments “just devastating … beyond horrendous.”

She recalled a 2002 visit to Bor “when we were out in the middle of nowhere but they had a generator they turned on after dark and we could watch CNN out of Europe. We were hearing about tensions in North Korea and things happening in Mexico and whatever was going on in the Middle East and problems in Myanmar but there was never any reporting about South Sudan.” It made the people feel as is “nobody knows, nobody cares … so it completely undid them to have a U.S. bishop and a Brazilian bishop show up.”

While in Bor, Waynick ordained four new priests “three of whom were women. They were the first women to be ordained priests in that diocese. I believe one of them was among those killed in the cathedral in February,” she said.

“For us, these are not just statistics we are hearing about. They’ve been here, they’ve stayed in our homes, we’ve been there and played with their children, spent time with their mothers. These are friends. We worshipped with them at St. Andrew’s Cathedral in Bor, which is just not there anymore.

“I go online and there are some BBC posts but we’re not getting any substantial news coverage of this. The U.S. public is unaware of it.”

Consequently, the Indianapolis diocese has undertaken “Sharing Love with South Sudan,” a long-term fund- and consciousness-raising project, to sell for a minimum $5, heart-shaped pins that give basic info about South Sudan along with website addresses.

Waynick also made a presentation to the House of Bishops to ask for support and funds to help South Sudan.

Political activism with AFRECS
AFRECS’ Parkins said that Renk Bishop Garang also will visit Washington, D.C., and will meet with U.S. State Department Africa Bureau staff, as well as the U.S. Agency for International Development and the U.S. Institute for Peace, and, hopefully, with congressional and faith leaders.

In a newsletter article to AFRECS supporters, he described the network’s efforts to support Garang and other bishops in their ministry of peace and reconciliation.

“Our prayer is that circumstances will permit a real peace to take hold,” he said. “We have learned about a project in the Kakuma Camp in Kenya where pastors from different ethnic groups will be trained in peace and healing techniques.

“We know of efforts to form peace institutes in the Bishop Gwynne [in Juba] and Renk colleges of theology, where pastors and lay leaders will be trained as catalysts for peace and reconciliation throughout South Sudan,” he said.” We have made each other aware of attempts to raise funds to relieve the suffering of the thousands displaced by the war. We have sent out an appeal for equipping bishops in the most impacted regions so that they can continue their pastoral outreach to their people.

“What is most significant about these [network] calls is the message that they convey: that those in the South Sudan have not been forgotten. Those who join these calls are determined that war and destruction will not be the ultimate outcome of South Sudan’s recent struggle.”

Above all pray, said Garang, “because we believe, as Christians, in the power of prayer.”

It “raises the morale of the people of Renk to know that people across the sea are thinking of them,” he said, in a press release announcing the vigil in Chicago.

“It sends a message to politicians and those in charge … why are we killing each other? We are important enough that there are people to care for us and are praying for us,” he said. “Without help and support we cannot make peace. We are looking for support from our brothers and sisters … We need you now more than ever.”