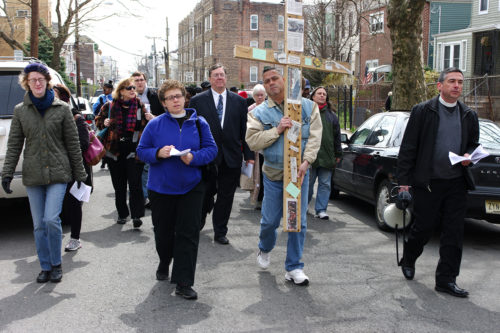 [Episcopal Diocese of Newark] “Darkness and danger – they’re not the only things that live here,” said the Rt. Rev. Mark Beckwith, bishop of the Diocese of Newark, after praying the Stations of the Cross on Good Friday at 14 sites of violent crimes in Jersey City.

This public Stations of the Cross is an example of the diocesan movement towards a more missional approach, by bringing the altar into the world and listening to the stories in the community.

The idea for this joint Good Friday observance originated in a brain-storming session months ago between the Rev. Thomas Murphy, rector of St. Paul’s, and the Rev. Laurie Jean Wurm, rector of Grace Van Vorst. “Laurie and I were tossing around ideas last summer about how we could go out together into our communities,” said Murphy, “and Good Friday came up as an idea.” The two priests contacted members of the Jersey City Police Department, with whom they’ve developed a relationship, and asked them to identify locations of recent violent crimes.

As in many urban areas, violent crime is a continuing problem in Jersey City, which with 250,000 residents is the second-largest municipality in New Jersey. Although total violent crime has declined, in 2013 there were 20 murders, up from just 12 the year before, according to New Jersey State Police records.

Murphy said they were gratified by the Police Department’s enthusiastic response. “From the first time Laurie and I approached them about it, they’ve been on board.” The 14 locations identified by the police included the sites of murders and violent assaults. 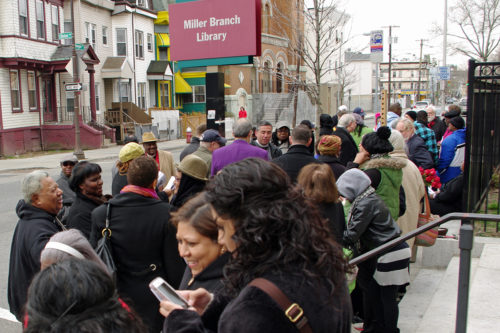 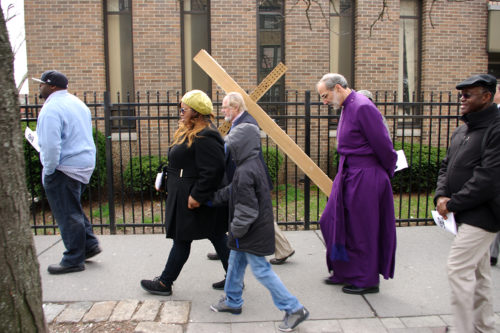 Casper Ewig of St. Paul’s in Bergen carries the cross as Bishop Mark Beckwith and others follow. Photo: Nina Nicholson

At each of the 14 sites the procession stopped to hear the story of the station in the traditional liturgy, followed by a brief description of the violent incident that took place there. A participant hammered a nail into the cross, the people joined in reading responsively a prayer or poem and Bishop Beckwith led the group in a concluding prayer. 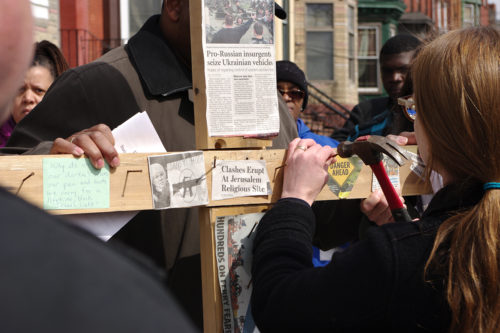 At each station, a worshiper hammered a nail into the cross. Photo: Nina Nicholson

Although brief, the descriptions of the violence that had taken place at each location were sobering. “In this place,” proclaimed the reader at the third station,” a beloved child of God was found shot and bleeding from the head. He was pronounced dead at the scene.” At the fourth station, “two beloved children of God were stabbed during a domestic dispute. One of the victims later died from her injuries.” At the 13th station, “a beloved child of God was shot in the chest after being robbed. He later died of his injuries.”

Each time, before the procession moved on, Jane Jackson of Grace Van Vorst placed a red rose on the spot.

“I abhor violence in the world,” said Jackson, “and this felt like a way to witness for peace. To do it with other people of like mind felt really good.” 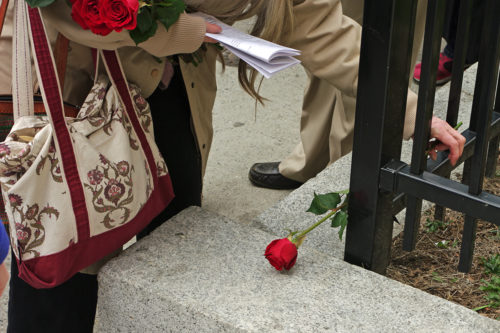 Gail Blache-Gill, the minister of music at both St. Paul’s and Incarnation, and Colin Britt, the music leader at Grace Van Vorst, led the participants in singing hymns throughout the procession.

Residents leaned out of windows or stopped and turned to watch the procession pass. Worshipers handed out cards with a prayer for the end of violence in Jersey City. 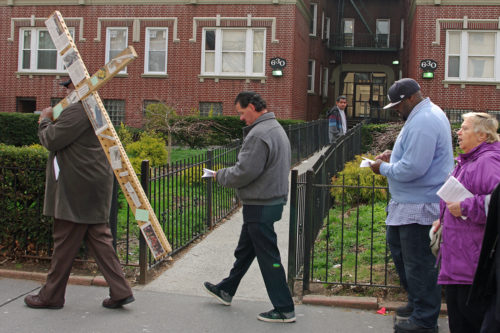 At the 12th station, where “a beloved child of God was lying on the ground with several gunshots to his chest” and later died, a resident who identified himself only as Carlos joined the worshipers. “I knew him,” he announced, and then helped hammer a nail into the cross before going on his way. 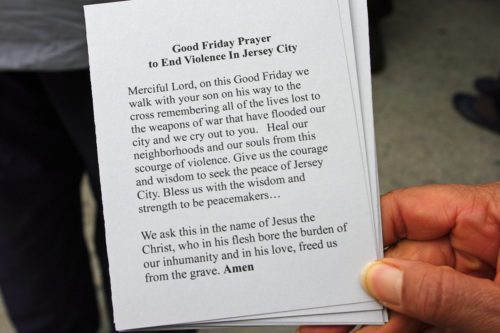 Prayer cards were handed out to residents along the route. Photo: Nina Nicholson

The prayerful observance moved not only participants and residents, but the journalists and police officers who accompanied them as well.

Jersey Journal photographer Reena Rose Sibayan, who documented the procession from beginning to end, commented, “This is very different from other Stations of the Cross we’ve covered,” noting that it was the first that was more than just the traditional liturgy. She said she was also struck by the fact that the victims were “so many young people, so close together.” 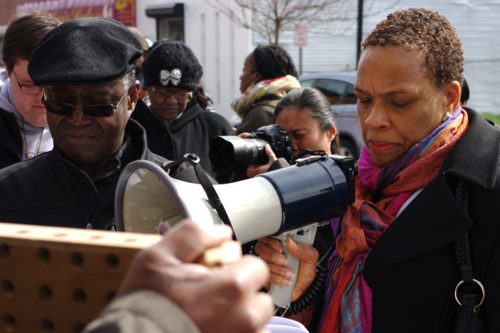 Sidney King and Carol Harrison-Arnold, Wardens of Church of the Incarnation, read at one of the stations while behind them Jersey Journal photographer Reena Rose Sibayan takes photos. Photo: Nina Nicholson

Captain Michael Kelly of the Jersey City police coordinated the officers who accompanied the procession. At the conclusion, he said, “This was really, truly inspirational. I personally responded to many of these scenes, and I remember the faces of the kids” who were injured or killed. During the Stations of the Cross, he said. “Their faces came back to me. It brought me to goose bumps, and sometimes to tears.”

Police Community Relations Officer Doris Johnson praised the event for bringing residents together. “We’ve got to make sure the community comes together – then we can make things better for everyone,” she said, adding: “I can’t wait until next year!” 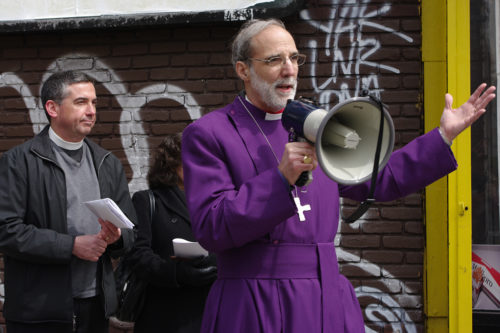 Bishop Mark Beckwith addresses the group at the end of the procession, while the Rev. Thomas Murphy of St. Paul’s in Bergen looks on. Photo: Nina Nicholson

“This was a very positive witness,” said Beckwith. “We connected the stories in the street and the stories from the Gospel. The cross, the crowd and the liturgy held us all together.”