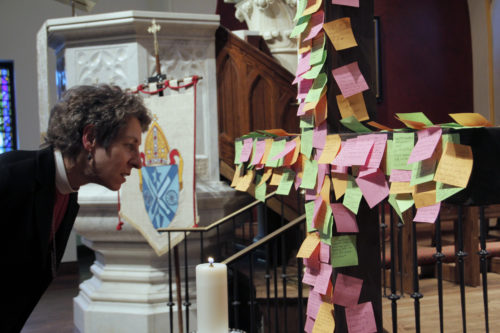 [Episcopal News Service – Oklahoma City, Oklahoma] After nearly three days of learning and praying about how to turn the epidemic tide of violence in the world, participants in the Reclaiming the Gospel of Peace gathering left here to begin Holy Week as the United States witnessed yet another shooting attack.

Frazier Glenn Cross, 73, of Aurora, Missouri, is accused of killing three people during two separate shootings April 13 in Overland Park, Kansas, at the Jewish Community Center of Greater Kansas City and in a parking lot at Village Shalom, a senior living community about a mile away. Cross is as a former Ku Klux Klan leader with a history of anti-Semitism and racism, according to the Southern Poverty Law Center, a civil rights organization that tracks hate groups.

Temple Israel and St. Thomas the Apostle Episcopal Church in Overland Park gathered at St. Thomas the evening of the shootings for a vigil service for those who were impacted by the violence.

“I know they are in heaven together,” Mindy Corporon told the vigil. She is the daughter of slain William Lewis Corporon and mother of Reat Griffin Underwood, 14, who was killed with his grandfather.

The name of the third person killed, a woman, has not yet been released.

“There are no words but words are all we have,” Kansas Bishop Dean Wolfe told those gathered.

And, at the end of the Reclaiming the Gospel of Peace gathering on April 11, Diocese of Maryland Bishop Eugene Sutton told the participants that “out of talk, much can happen.”

Two women who have experienced horrific violence and its aftermath set the tone for the closing day of the gathering. 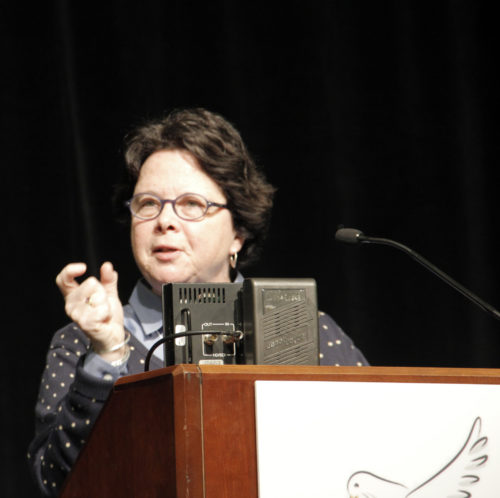 The Rev. Kathie Adams-Shepherd, rector of Trinity Episcopal Church in Newtown, Connecticut, gave the morning reflection April 11 and talked about her parish’s experience of the Dec. 14, 2012, massacre at nearby Sandy Hook Elementary School. Photo: Lynette Wilson/ENS

“I am standing here this morning because the violence that takes the lives of God’s beloved children every day all over our county and our world visited us in all its horrific and tragic loss in the quiet suburb of Newtown, Connecticut, on Dec. 14, 2012,” said the Rev. Katie Adams-Shepherd, rector of Trinity Episcopal Church in Newtown, Connecticut, during morning worship.

“Twenty-eight lives, violently and tragically cut short by a mentally ill man who had access to the kinds of weapons and high capacity magazines that he simply should never have had at his disposal, but rather should have had access to affirming mental health care and support,” she said.

“We in Newtown are well aware that we joined a large part of the world that suffers mercilessly from violence and terrorism.”

In the aftermath of the massacre at Sandy Hook Elementary School, the world took notice and the tragedy served as a  “tipping point” for people of faith, she said.

“It’s a very important part of the healing process for every person touched by violence and violent death that we come together from all corners of live and faith, belief and perspectives seeking a way, multiple ways to live as co-missioners with God,” said Adams-Shepherd.

“I’m sorry that it took such a tragedy in an affluent community in one of the wealthiest counties in a first world country to wake us up even just enough to have conversations like this one,” said Adams-Shepherd. “The horrific and violent deaths of our brothers and sisters and all of our children all over the world for all these years should have been equally compelling.”

In the 16 months following the shooting, Adams-Shepherd said her community has become more engaged with others worldwide, including in Oklahoma, Colorado, South Sudan and El Salvador, communities that have suffered violent deaths, whether they’ve resulted from natural disasters or mark the everyday reality of life. 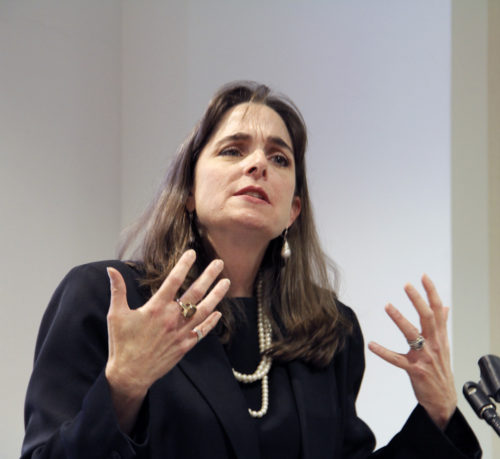 Melissa McLawhorn Houston, a survivor of the Oklahoma City bombing, shared her story with the group. Houston participates in the National Memorial and Museum’s First Person: Stories of Hope program. Photo: Lynette Wilson/ENS

Melissa McLawhorn Houston has also transformed her experience of violent death into a way to help others around the world deal with similar events. She survived the April 19, 1995, bombing of the Alfred P. Murrah Federal Building in Oklahoma City. On that day during Holy Week almost 20 years ago Timothy McVeigh committed an act of domestic terrorism that killed 168 people and injured 600 others; one of the first 20th century tragedies in what has become an epidemic of violence in the United States.

Houston and other bombing survivors tell their stories to visitors to the Oklahoma City National Memorial and Museum and to people who have suffered from violence, including the 2011 bombing and shootings in Norway that left nearly 100 people dead.

“One of the biggest ingredients that we see in terrorists is a lack of hope,” Houston told Reclaiming the Gospel participants during a visit to the museum. “If you don’t have your own sense of hopefulness for your own life, that’s where a lot of that starts from.”

Houston, who spent 10 years working for the Oklahoma Office of Homeland Security after the Murrah bombing and who now works as chief of staff for the state’s attorney general, said ultimately she had to choose how to respond to what happened to her that day in downtown Oklahoma City. She has chosen to be a “hopeful witness” despite feeling “a sense of evil” in the second after the blast knocked her to the ground of her office across the street from the Murrah building and showered her with debris. 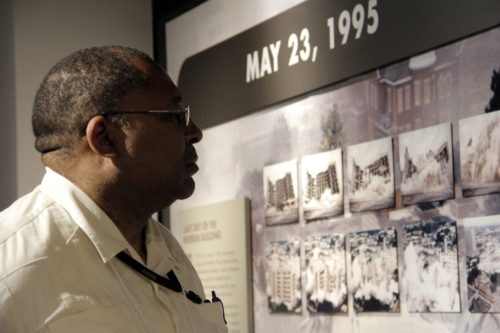 Experiencing that sort of violence does not leave people unscathed, Houston acknowledged, recalling her message and those of other Murrah survivors to survivors of the Sept. 11 attacks or last year’s Boston Marathon bombing, many of whom turned to Oklahoma City for help and advice.

They told those people “it really sucks where you are right now but you will eventually move on. You won’t get over it; you’ll be different, you’ll be changed but, you will continue to have a life.”

After suffering  violence, some people choose vengeance, wanting to destroy the person or system they believe cased them harm, Houston said.

But others, including the people who tell their stories via the museum’s education program, want to ask how society might help prevent vengeance from growing in people’s hearts. “How do we change people’s hearts and make them understand that just because they’re mad doesn’t entitle them to take 168 lives?” is the question they ask, she said. 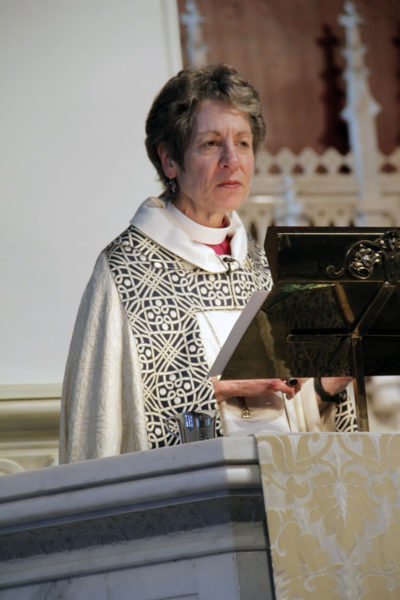 Presiding Bishop Katharine Jefferts Schori spoke about the role of the heart during her sermon at the gathering’s  closing Eucharist.

Violence is intrinsically kin to evil, she said, while “the ultimate counterforce to fear is perfect love, the ability to share life to the full, with radical vulnerability, in the face of those who would destroy it.”

“Feeding the rage of violence may briefly burn out the heart of aggression, but it only increases the carnage,” Jefferts Schori said. “It does not increase love.”

Earlier in the conference Archbishop of Canterbury Justin Welby also spoke of the heart’s role in transforming violence.

“Reconciliation and an end to violence, or the transformation of violent conflict into non-violent conflict is something that can only be achieved by sacrifice and by a prophetic stand,” he said. “There are no shortcuts and no cheap options, which is why this conference is so important. There are no shortcuts and there are no cheap options. We are talking at this point about change in the heart of the human being, and neither technology nor law will alter that.”

However, he warned participants of the work ahead, saying that “reconciliation with God is achieved through the cross, not through conferences and meetings and declarations.”

“The Christian disciple is to take up their cross, and for many even today this is no mere metaphor,” Welby said. “Bearing the cross means public ownership of Christ, public association and love with and for all those others who own Christ as Savior, and public commitment to follow Christ wherever we are taken.” 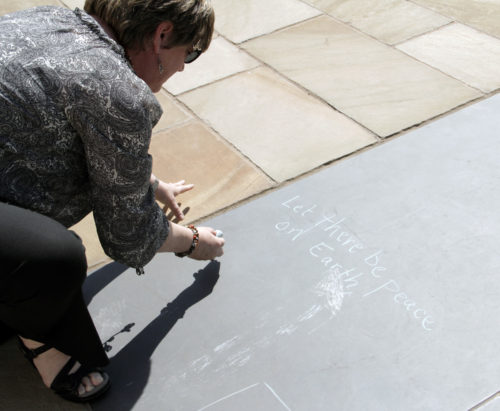 Beth Crow, youth missioner in the Diocese of North Carolina, writes “Let there be peace on earth and let it begin with me,” on a blackboard panel during a visit to the Oklahoma City National Memorial & Museum. Photo: Lynette Wilson/ENS

Brother James Dowd, a member of the Order of the Holy Cross, echoed those sentiments when he said during a panel discussion on Episcopal responses to violence that to move more deeply non-violent discipleship of Christ, the contemplative life is essential.”

And, it’s not that God needs more monks and nuns, he said.

Reclaiming the Gospel of Peace: An Episcopal Gathering to Challenge the Epidemic of Violence was held April 9-11 at the Reed Center and the nearby Sheraton Midwest City was meant to help Episcopalians renew their commitment to the Gospel call to make peace in a world of violence and “reclaim their role in society as workers for nonviolence and peace.” 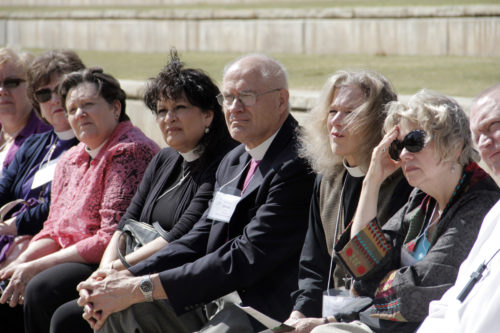 The gathering of 220 people, including 34 bishops, Jefferts Schori and Welby, was centered on four pillars: advocacy, education, liturgy and pastoral care, aimed at addressing the culture of violence within and outside of the church.

Workshops and panel discussions touched on programs designed to meet the needs of children of incarcerated parents, to foster restorative justice programs and to curb violence through job creation and creating alternative paths for at-risk youth, as well as information about advocating for stricter gun laws and purchasing restrictions.

Jefferts Schori told a news conference on April 10 that the conference was about “encouraging the world to pay attention to what we believe is the gospel about the reign of God” that describes a “world where people live in peace because there is justice.”

“We are seeking to respond to the eternal epidemic of violence in our culture and around the world,” she said.

– The Rev. Mary Frances Schjonberg and Lynette Wilson are editors/reporters for the Episcopal News Service.