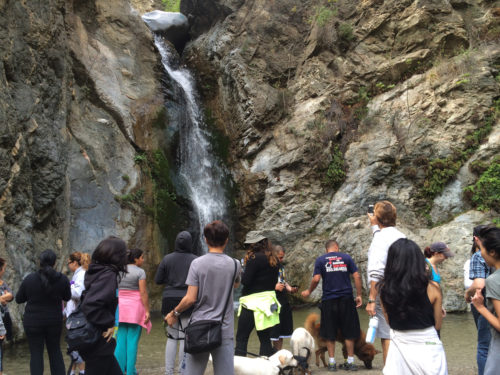 [Episcopal News Service] The season of Lent may rapidly be coming to a close but some creative Lenten spiritual practices seem sure to linger on.

Like the ‘Fat-Tuesday’-inspired “Skinny Tuesdays” running club at Trinity Cathedral in Miami in the Episcopal Diocese of Southeast Florida.

After the traditional Fat Tuesday pancake suppers “we figured everyone was going to need a skinny Tuesday,” joked the Rev. Grey Maggiano, assistant priest and a serious runner. “People enjoy it, it’s a neat way to have a diverse group of people gather.” 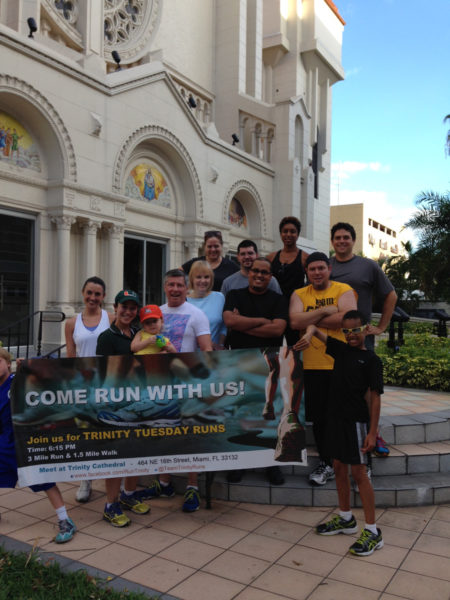 Altogether, about 50 people have joined in the runs at one time or another during Lent, with about a dozen participating regularly. “We meet on the cathedral steps at 6:15 p.m., stretch for 15 minutes, talk and catch up, pray and then we take off,” said Maggiano.

Participants are aged from 7 to 70; some do a two-mile walk, others a three-mile run along the Venetian Causeway from Miami to Miami Beach and back again. “We run along the water the whole way.”

The physical exertion helps clear out the clutter of the day, Maggiano added. “The rhythm and pacing of running has always given me something else to focus on so I can distract my mind … and that little corner opens up where I connect directly to God and pray as I’m running and life becomes simple. You focus on two things, God and the road and nothing else matters for that two-hour stretch,” he said.

It also has been a helpful spiritual practice because “Miami, like most cities, is so built up, we can forget how close we are to nature.

“Watching fish jump out of the water, and running by palm trees and reminding yourself that this once all was nature that we’ve taken over, is an important reflection for our call as Christians in this community,” he said. “To remember, that not only are we serving God and each other but we’re also serving this creation that surrounds us.”

The group has even attracted some runners who aren’t members.

“The thing that’s exciting for me as a priest is the people showing up and the conversations being had on the margins with folks about their lives and their kids and their spiritual lives and everything else.

“Now, one young runner wants to become an acolyte and to get more involved at the cathedral,” added Maggiano, 33. “Last week he brought a friend, so he and the friend raced while their moms walked and talked together. It’s exciting to see new people becoming familiar with the cathedral and the Episcopal Church through something as simple as running.”

“Hiking is such a wonderful time to meditate, as well as focusing on health,” according to the Rev. Neil Tadken, St. Luke’s priest-in-charge, who is considering establishing hiking as a regular weekly time with parishioners. 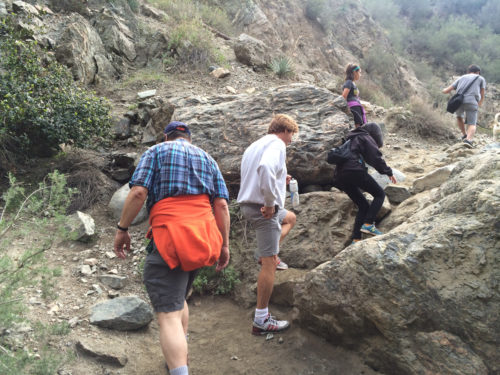 The hikers meet at the church and carpool to the hike location; the weekly treks are moderately paced, “and we’re learning what works and what doesn’t,” Tadken said. He selects the hiking paths in consultation with others and by checking hikespeak.com, a guide to California hiking trails.

Their first outing, a 5-mile jaunt along the Sam Merrill Trail to Echo Mountain in the San Gabriel Mountains, offered both physical and spiritual connections with that week’s gospel, “the temptation of Jesus in the wilderness where he is shown all the kingdoms of the world,” he said.

“We could see as far as from Camarillo to Palm Springs to Catalina Island” a sweeping panoramic 150-plus mile view of the Southern California landscape, according to Andy Dagis, an avid hiker and church member.

Wearing hiking boots, shorts and an Illinois sweatshirt, Dagis, a statistician for City of Hope and former Sierra Club member, also was along April 5 on a 3.5-mile hike to the 40-foot Eaton Canyon waterfall in the San Gabriel Mountains.

“Is the high road easier?” he mused as the group brushed past wild rosemary bushes, California pine and oak trees, navigating slippery rocks while crossing small flowing streams, up hill and down, alongside a winding creek, in semi-rugged terrain.

Much of the journey was single file, solitary, except for periodic stops to reflect on the next day’s Old Testament lesson, Ezekiel’s vision of the valley of the dry bones, prompting hikers to review the past and reflect on the future.

“When in your life have you felt all dried up?” Tadken asked hikers, in response to the Scripture. “What helped you renew your faith? If we say the future is nothing more than what the past has always been, then we can’t call something new into being.”

Yoga Nidra in Seattle: becoming still, still, still
For yoga instructors Wendy Townsend and Brenna Kramer, teaching ‘Yoga Nidra’ at St. Mark’s Cathedral in Seattle, Washington, was to offer stillness and centering as a response to the way “our society is so driven to go, go, go, do, do, do and it leads you into a very deep place.”

Participants have gathered in the dimly lit cathedral for the five-week series and during the hour-long class focused on “a starry night, a mountaintop, images that help you let go of your shopping list and what you have to do tomorrow, and go to your center,” she said.

“I like to talk about my favorite Bible quote, 1 Cor. 3:16, do you not know your body is a temple and that God dwells within you,” she said.

The cathedral backdrop aids “the sense of being in a holy place. It’s a wonderful place to practice yoga,” added Townsend, 71, a 14-year instructor.

Yoga “is not a competitive sport. It’s an individual experience. We invite people to close their eyes and go inside and find this being that they are. It brings you into a reflective awareness and I think people long for that,” she said.

Similarly, “coming out from a deep sense of reflection enables you to better live your life because you are coming from a deeper place,” she added. “We get very superficial and we’re getting it all done but I don’t know that we come from the deeper place of being connected.”

“It’s an idea of using Instagram and sharing the pictures of our lives and where we see God at work in our everyday normal lives outside of Sunday mornings,” Allen told ENS recently.

Imagine spending an entire day snapping camera phone selfies – Lent- and faith-focused ones – and then sharing six to eight of them, said Allen who took the first slot on Ash Wednesday and included bread as one of her images.

“Somebody brought me some bread as a little thank you gift and so I took a photo of it with my phone. You know, bread, bread of life, it took me to all kinds of places.”

Others have taken photos of their journals, daily Lenten readings, plants, candles, and people interactions.

For Allen, it’s become a spiritual discipline in that it helps remind us “that God is there, if we pay attention and if we take the time to really open our eyes … and you realize that’s really what we ought to be doing all the time.”

She admits to being an Instagram newbie until the Lent baton happened, “but there is a lot of potential for sharing … your image of the world and how you see it,” she said. “Everybody is an artist with their camera phone” and the wider community has also joined in.

Parishioner Mike Belmares, who facilitated the Lent baton, got the idea after seeing the popularity of the RDU Baton where “people in Chapel Hill and Raleigh, were signing up to take the baton to show parts of their lives, where they hang out, go jogging, eat. It has a two- to three-month wait list so he decided to adapt it to the church.

With a signup genius phone app, all participants have to do is “see it, snap it, share it,” he said. Nativity lends its account user name and password for a day, to participants.

“Lent is kind of this forgotten season, yet so pivotal to our faith,” he added. “It isn’t just about weeping and gnashing your teeth, or about your sins. It is a procession up to Easter. The idea was to kind of give life to a somewhat forgotten season, and to find fun ways to do it.”

He aims to continue the practice. “It is a matter of taking the message outside the brick and mortar of our congregations,” he said. “It’s about sharing faith. And I love the Episcopal Church and I think it has a lot to offer.”

The enthusiasm has caught on and “we’ve had other folks in our diocese jump on board. That was really neat to see. Folks we’ve never known have gotten involved from other congregations and it’s become a way for people to share their faith.”

“We just wanted to engage people and to share, that’s all. There is more power in all our hands than some of our hands.”

Seattle and the Ministry of ‘Worsted Wool’
While it’s true that Jonie Pritchard and Barbara Erickson are serial knitters, this year they invited others to enrich their faith during Lent by knitting baby blankets for a local pediatric clinic for the underserved.

It has also functioned as a kind of virtual ministry, in that the participants corresponded via the Internet, exchanging patterns – called ‘Jonie’s pattern’ – and e-mails, but worked in the solitude of their homes.

For Pritchard, performing the knit one, purl one, simple basket weave stitch is in itself a spiritual exercise, which she augmented “by praying as we’re knitting,” she told ENS recently. “We are bringing a new child into the world and this is a special thank you God for the ability to knit or crochet.”

Soft pastel worsted wool yarn is used and “we should have a big basket full of baby blankets to be blessed the Sunday after Easter.”

Along with six other members of St. Mark’s Cathedral in Seattle, they participated in the ministry, dubbed the Ministry of Worsted Wool by Erickson.

“It dawned on me that the blankets we make are out of worsted wool yarn. So I decided to call it the ministry of worsted wool, and then I found a little lamb on Google and that’s become our little symbol,” Erickson said.

“It just felt like it was the right thing to do for the season,” she told ENS recently.

“We just knit, and I give away a lot of my knitted products. So, whenever I knit something it’s done with that spiritual intention.”

Knitting, for Erickson, “has a spiritual aspect. It’s a calming thing … To me, no matter what’s going on in the world if I just go and sit and knit I’m at peace.”

Added Pritchard, 76: “It’s a labor of love. I do this all year long but this time I have blocked out the other blankets I have requests for and am just doing this during Lent specifically with the idea in mind that St. Mark’s Cathedral will be knitting a bunch of blankets for the clinic.

“And I picture these little babies be there, and I pray it [the blanket] will comfort the new baby, and be of comfort to the mother, that the baby will be blessed by God and will turn to God. It’s all done with love and to the glory of God.”