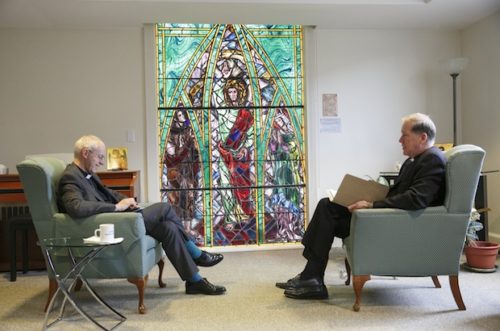 Archbishop of Canterbury Justin Welby and Archbishop Fred Hiltz met for two hours at the convent of Sisters of St. John the Divine in Toronto. Photo: Michael Hudson

[Anglican Journal] After a 12-hour day of back-to-back engagements, a jet-lagged Justin Welby, the 105th archbishop of Canterbury, sat down for a 15-minute interview with the Anglican Journal late Tuesday evening, April 8.

Welby and his wife, Caroline, arrived in Toronto Monday afternoon for a one and a half day “personal, pastoral visit,” his first, to the Anglican Church of Canada. Welby, whose area of expertise includes conflict resolution, has said that these visits are part of a process for getting to know the primates (senior archbishops) and their churches. The Anglican Communion, which has been struggling with divisions over the issue of sexuality, has about 80 million members in 143 countries. Including Canada, the archbishop has visited 17 of the Communion’s 37 provinces and aims to visit them all by the end of the year or early 2015. He arrived April 9 in Oklahoma City, to visit The Episcopal Church.

Q: How would you describe your first visit to the Anglican Church of Canada? What have you learned about this church that has been most unexpected?

Q: You mentioned in your dinner remarks that your conversation with the primate, Archbishop Fred Hiltz, has been most useful in terms of how to move forward in the Communion.

A: We had two hours together and I find him a particularly helpful, thoughtful and challenging interlocutor, and someone who seems to be able to unlock and unpick issues that were weighing on my mind and to…enable more creativity. I don’t know if that’s part of his life as primate, but I felt that, as a result of the conversation, I was more creative than I was before it.

Q: Could you give us a sense of what you talked about?

Q: In 2016, the church’s General Synod will be presented with a resolution changing the marriage canon to allow same-sex marriage. Is this a cause for concern?

A: That’s a really tough question. Well, it’s got to be a cause for concern because this is a particularly tough issue to deal with…And, I hope that two or three things happen: I hope that the church, in its deliberations, is drawing on the wealth of its contribution to the Anglican Communion and the worldwide church, to recognize…the way it works and how it thinks, to recognize the importance of its links. And that, in its deliberations, it is consciously listening to the whole range of issues that are of concern in this issue. We need to be thinking; we need to be listening to the LGBT voices and to discern what they’re really saying because you can’t talk about a single voice anymore than you can with any other group. There needs to be listening to Christians from around the world; there needs to be listening to ecumenical partners, to interfaith partners. There needs to be a commitment to truth in love and there needs to be a commitment to being able to disagree in a way that demonstrates that those involved in the discussions love one another as Christ loves us. That’s the biggest challenge, that in what we do, we demonstrate that love for Christ in one another.

Q: Some people have reacted strongly to your statements about the issue of gay marriage in your interview with LBC radio.

A: Lots of people have.

Q: Were you in fact blaming the death of Christians in parts of Africa on the acceptance of gay marriage in America?

A: I was careful not to be too specific because that would pin down where that happened and that would put the community back at risk. I wouldn’t use the word “blame”— that’s a misuse of words in the context. One of the things that’s most depressing about the response to that interview is that almost nobody listened to what I said; they mostly imagined what they thought I said…It was not only imagination, it was a million miles away from what I said.

Q: So what exactly were you saying?

A: What I was saying is that when we take actions in one part of the church, particularly actions that are controversial, that they are heard and felt not only in that part of the church but around the world…And, this is not mere consequentialism; I’m not saying that because there will be consequences to taking action, that we shouldn’t take action. What I’m saying is that love for our neighbour, love for one another, compels us to consider carefully how that love is expressed, both in our own context and globally. We never speak the essential point that, as a church, we never speak only in our local situation. Our voice carries around the world. Now that will be more true in some places than in others. It depends on your links. We need to learn to live as a global church in a local context and never to imagine that we’re just a local church. There is no such thing.

Q: You’ve said the issue of same-sex marriage is a complex one that you wrestle with every day and often in the middle of the night…

A: I have about a million questions. I think really I’ve said as much as I want to on that subject.

Q: You recently released a video collaboration with Cardinal Vincent Nichols. What was the impetus for that?

A: It came about in the discussions we were having together. We meet together to discuss and pray quite regularly and out of that came the sense that we ought to do something public and visible that demonstrated what the church is already doing, to draw attention to that and that we’re centered both in prayer and social action.

Q: Is there an Easter message you’d like to give to Canadian-Anglicans?

A: I would say that at the heart of my own thinking as we approach Easter is to recall the joy that is in the risen Christ.

Q: Is it harder for you now to be on Twitter because you’re the Archbishop of Canterbury?

Q: Are you less candid?

A: I’m not necessarily less candid. It’s very interesting with social media, isn’t it? Every day I get loads of questions directed at me through a Twitter message—everything from “What’s your favourite book?” to “Are you really saying…whatever?” Sadly, there’s really no way I can respond to those—it’s just impossible. I would do nothing else all day, and then I wouldn’t get through it. One of the things I find difficult is ignoring responses to things that are tweeted because everything in me wants to respond to the people who’ve responded to me. But it’s just not possible. The other thing is that you just become aware of the dark side of all these things: that people feel that they can write things about other people, and not just about myself, which are really horrible. And so I have to say there are moments when you think, “I just don’t know if I want to put up something on social media because it will just unleash a torrent of abuse from some people.” But in the end you think, “Well, I won’t read it…there’s no point… I’m just going to get on with life.”

Q: Do you still compose your own tweets?

Q: You don’t have a minder doing that for you?

A: No, no. I said it’s got to be authentic. It’s got to be me; that’s why there are sometimes gaps. I’ll go through a few days where nothing particularly occurs to me or I’m traveling. I’m not on Twitter today—I might just manage it today before I go to sleep. Some days, lots of things happen; other days, my mind is a perfect blank…

Q: You also need to be kind to yourself.

A: I do know about that, but you at least have to know when you’re going to bore people stiff.