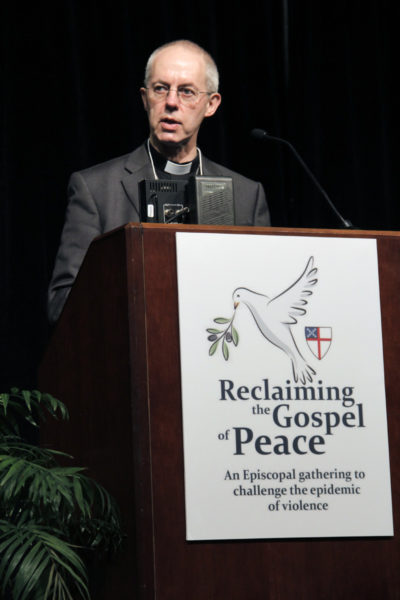 Archbishop of Canterbury Justin Welby spoke April 10 during the Reclaiming the Gospel of Peace: An Episcopal Gathering to Challenge the Epidemic of Violence. Photo: Lynette Wilson/ENS

[Editors’ note: a correction was made to this article to remove reference to the location of the mass grave where Welby said he had been told Christians were murdered out fear that they might become homosexual because of Western influence.]

[Episcopal News Service – Oklahoma City, Oklahoma] Archbishop of Canterbury Justin Welby said April 10 that “the gospel of peace is reclaimed by loving those who love violence and hatred” and that a church committed to peacemaking “looks like those who join their enemies on their knees.”

“We celebrate the fact that as the Anglican Communion functioning as a community of peace across the world, as it does in so many places so wonderfully with such sacrifices, that it manages disagreement well in many places, that it maintains unity across diametrically opposed views on a matter – that that Anglican Communion to which we belong could be the greatest gift to counter violence of all descriptions in our world,” Welby said.

Welby spoke during the April 9-11 Reclaiming the Gospel of Peace: An Episcopal Gathering to Challenge the Epidemic of Violence being held at the Reed Center and the nearby Sheraton Midwest City here.

He said what is sought is a church “that bears the cross, that is so caught up in Jesus Christ and its relationship with Jesus Christ that it is drawn inexorably in partnership with the poor and pilgrimage alongside them, sharing the surprises and risks of the journey under the leadership of Jesus Christ.”

“We do not see such churches today on a global scale, although they may be found in many places at a local level,” he said. “To turn this into a national [phenomenon] such a great and huge nation as this, let alone a global phenomenon, is humanly impossible. We find it easier to be caught up in our own disputes and our own rights.”

It must be acknowledged that human beings are inclined towards violence, Welby told the gathering. “Violence is intrinsic to being human, and I have to say in particular to being human and male, or human and powerful, over against minorities of all kinds,” he said. “Moreover it is addictive, violence is addictive, and we become hardened to it.”

But, God “is committed to acting in response to wrongdoing” and is a God who judges but also saves, “giving of God’s own self to make an opportunity for rescue,” the archbishop said.

However, he said, Holy Week’s anticipation of Easter shows a different way.

“It is in accompanying Jesus on the long walk through Holy Week to the cross that we will find ourselves bound together afresh and love released,” Welby said. “The love will be such that we cannot imagine unless we turn to Christ in repentance, seeking to be those who challenge and overcome the violence that he himself bore for us on the cross. It will be a love that comes to reclaim in ourselves and in our communities the gospel of peace.”

The text of his speech is here. 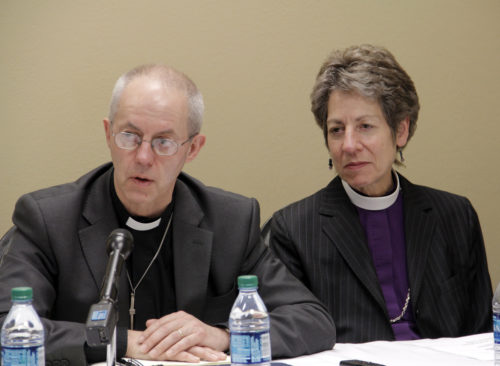 At a later press conference with Presiding Bishop Katharine Jefferts Schori and Diocese of Oklahoma Bishop Edward Konieczny, Welby was asked about comments he made April 4 when he told a British radio call-in show that that Christians in parts of Africa face abuse, violence and even death because of decisions on sexual equality made by Anglican Churches in the West. His answer came in response to a question from the Rev. Kes Grant, a Church of England priest and school chaplain who had called in to ask why English clergy were not allowed to decide for themselves whether to marry gay couples.

“Why we can’t do it now is because the impact of that on Christians in countries far from here like South Sudan, like Pakistan, like Nigeria, would be absolutely catastrophic and we have to love them as much as the people who are here,” Welby said.

Welby explained that while standing at a mass grave he was told that the excuse given for the murder of hundreds of Christians there had been: “If we leave a Christian community in this area, we will all be made to become homosexual, and so we’re going to kill the Christians.”

Welby concluded, “The mass grave had 369 bodies in it and I was standing with the relatives. That burns itself into your soul, as does the suffering of gay people in this country.”

During the news conference, Welby noted that he had made similar comments in the past and that he was trying to say that “at its heart is the issue that we’re a global church.”

“The Anglican Communion is a global church.  And that wherever we speak, whether it’s here or in Africa, or in Asia or in any of the 143 countries in which we are operating, in which there are Anglicans, we never speak exclusively to ourselves but we speak in a way that is heard widely around the world,” he said. “And so the point I was making, because the question was essentially about why don’t we just go ahead and do gay marriages, we have a profound disagreement within the Church of England about the right thing to do, whether to perform gay marriages or have blessing of same sex marriages where the marriage has taken place in the civil system.”

Same-sex marriage became legal in England and Wales on March 29. Parliament by a comfortable majority passed The Marriage (Same-sex Couples Act) in July 2013.

The Church of England is “starting two years of facilitated conversation about this and we are not going simply to jump to a conclusion, to preempt that conversation in any direction at all but we need to spend time listening to each other, listening to the voices around the communion,” Welby said.

The example he gave during the call-in program of his experience at the site of the mass grave “was of a particular example some years back which had had a great impact on my own thinking,” he said during the news conference.

Earlier in the day when the archbishop spoke to the entire gathering, he said he and his wife Caroline stood alongside a mass grave in Bor, South Sudan, where the bodies of clergy and lay South Sudanese people were buried in what he has described as a massacre influenced by western acceptance for same-sex marriage.

“I think we need to be aware of the realities on the ground in our own countries and around the world and to take those into account when we are moving forward,” Welby said during the news conference.

“It doesn’t necessarily mean you do something other than you feel is the right thing to do but you are aware of the need perhaps to do it in a different way,” he continued. “It means particularly in these conversations that we have to make sure that we hear the voice of the LGBT community, which themselves in many parts of the world, including in our own countries suffer a great deal, and we also need to hear very carefully the voices of other members of the church, of other faiths, of ecumenical partners, so that it is a genuine process of listening and in listening to each to listening to the voice of God.”

A video clip of Welby’s comments at the news conference is here.

Welby came to the United States April 9 from Canada where he had spent four days meeting with Anglican leaders. Towards the end of that visit, Welby sat down for an interview with the Anglican Journal during which he also addressed his April 4 comments in a similar vein.

“One of the things that’s most depressing about the response to that interview is that almost nobody listened to what I said; they mostly imagined what they thought I said…It was not only imagination, it was a million miles away from what I said,” he added.

Both the Canadian and U.S. visits, which Lambeth Palace has said are “primarily personal and pastoral,” are part of the archbishop’s plan to visit the leader of every Anglican Communion province by the end of this year. Details about his other such visits thus far are here.

— The Rev. Mary Frances Schjonberg and Lynette Wilson are editors/reporters for the Episcopal News Service.