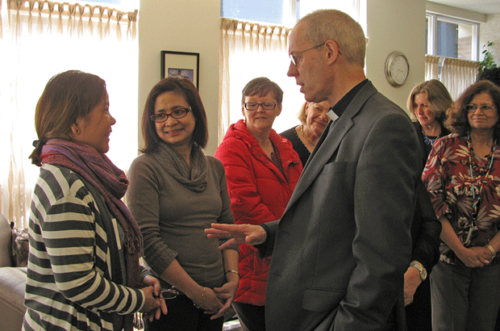 (Left to right) Cynthia Herrera and Emily Fe Honoridez chat with Archbishop of Canterbury Justin Welby as their co-workers Margaret Davidson, Evelyn Hinchcliffe, Kathy Edgar and Teresa Mandricks wait to welcome him to the national offices of the Anglican Church of Canada in Toronto. Photo: Leigh Anne Williams

Following a morning worship service and a meeting with Archbishop Fred Hiltz, primate of the Anglican Church of Canada, then a private luncheon in support of Canterbury Cathedral, the Welbys came to “Church House” in downtown Toronto, where there was a brief meeting with General Synod directors and management and reception with the staff.

Sharing her impressions from the meeting with management, Monica Patten, interim director of the Resources for Mission department, said, “There’s a sense of humility about him and clarity about what he sees and what his vision is and the areas of priority that I think he intends to work on.” She added that she was struck by the impression that “in a relatively short time he so deeply understands the Anglican Communion — both the opportunity and the potential as well as the challenges and he doesn’t actually seem to shy away from either of those.”

Henriette Thompson, director of public witness for social and ecological justice, who was also in the meeting, said, “One of the things that I am taking away from this archbishop’s visit is the wonderful degree of commitment he has to the Anglican church as a church of reconciliation and bridge-building. From his visits around the Communion, he described how the church is building bridges in so many different contexts.”

National Indigenous Anglican Bishop Mark MacDonald, who had met Welby previously in South Korea during the World Council of Churches meeting, said he appreciates Welby’s focus on reconciliation, particularly looking at the effects of colonization. “It was really gratifying to see his enthusiasm and excitement about what’s happening in the Anglican Church of Canada. I think he’s really aiming in the right direction. I think he’s going to have a big impact.”

Following the meeting, the primate introduced the Welbys to staff at a small reception in the lobby of the national office, and they gamely dove into the crowd to meet as many of the staff as possible in the brief time before they were due at an ecumenical vespers service at the Cathedral Church of St. James.

“I think it’s really admirable of him to spend a year traveling around the Communion meeting all the primates,” said Simon Chambers, communications coordinator for the Primate’s World Relief and Development Fund (PWRDF).  “The travel must be exhausting and grueling, but he’s been very gracious.”

Many staff commented on the archbishop’s friendly and humble manner.

PWRDF public engagement coordinator Suzanne Rumsey said she and her late father, who was an Anglican priest, used to discuss brushes with fame. “He’d be very pleased about this one,” she said after meeting both the archbishop and his wife.

“We’re really grateful that he chose to come,” said Evelyn Hinchcliffe, after she and her pension office colleagues Kathy Edgar and Sonia Bernard chatted with the archbishop.