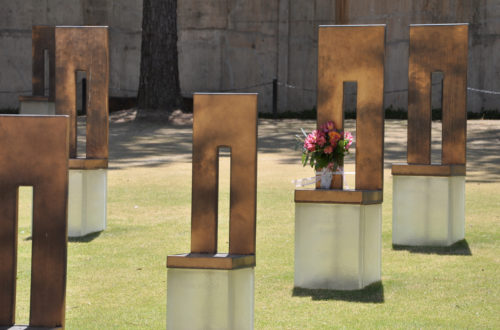 Participants in the Reclaiming the Gospel of Peace: An Episcopal Gathering to Challenge the Epidemic of Violence conference on April 11 will visit the Oklahoma City National Memorial & Museum which memorializes the April 19, 1995, bombing of the Alfred P. Murrah Federal Building by Timothy McVeigh, an act of domestic terrorism that killed 168 people and injured 600 others. The Field of Empty Chairs includes a chair for each life lost, including 19 smaller chairs for the children who died that day. Photo: Mary Frances Schjonberg/Episcopal News Service

[Episcopal News Service – Oklahoma City, Oklahoma] An Episcopal Church effort to have “a dialogue that our society has not been able to accomplish” about violence in general and gun violence in particular began April 9 here.

Reclaiming the Gospel of Peace: An Episcopal Gathering to Challenge the Epidemic of Violence being held April 9-11 at the Reed Center and the nearby Sheraton Midwest City is meant to help Episcopalians renew their commitment to the Gospel call to make peace in a world of violence and “reclaim their role in society as workers for nonviolence and peace,” according to a press release from the church’s Office of Public Affairs.

The gathering of 220 people, including 34 bishops, Presiding Bishop Katharine Jefferts Schori and Archbishop of Canterbury Justin Welby, is centered around four pillars: advocacy, education, liturgy and pastoral care as “key avenues to address the culture of violence within and outside of the church,” the release said. 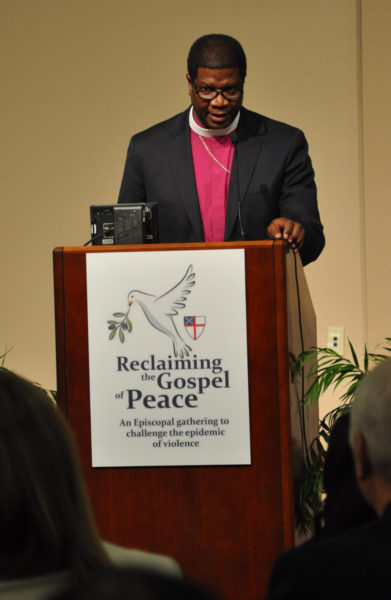 “We have worshipped for far too long at the altar of the gun to solve our problems,” says Diocese of Maryland Bishop Eugene Sutton at the opening session of the April 9-11 Reclaiming the Gospel of Peace: An Episcopal Gathering to Challenge the Epidemic of Violence conference Photo: Mary Frances Schjonberg/Episcopal News Service

Diocese of Maryland Bishop Eugene Sutton asked the participants to create a “condemnation-free zone” for the three-day conference that he said was a gathering of Episcopalians from “across the spectrum of geographical, political and theological differences to learn from each other, to pray with each other and to discern what the spirit might be saying to us as church leaders.”

Sutton invited people to “challenge the mythology of violence” in the United States that says violence will protect us from an unsafe and unpredictable world. Sutton said there is a “widely held myth that violence works and that non-violence is a pipe dream.”

“We have become intoxicated with violence as the only effective means to achieve our personal goals or national aspirations,” he said. “We have worshipped for far too long at the altar of the gun to solve our problems.”

Sutton said we have known for a long time that there is another way.

“The Christian gospel has proclaimed for thousands of years that there is a cure but we have lost confidence in our day that that ancient solution will work,” he said.

The gospel cure for violence is love, Sutton said, reminding people of Jesus’s commandment to love one’s enemies, bless those who curse you and pray for those who abuse you.

The text of his remarks is here. 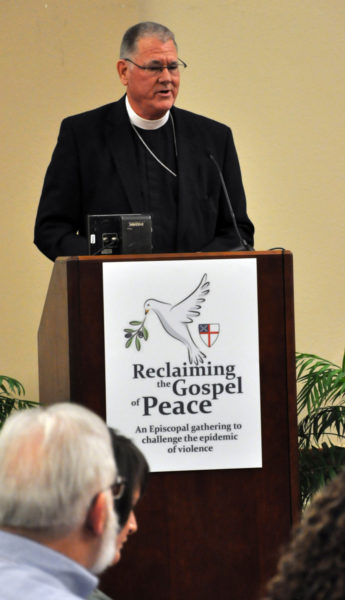 Diocese of Oklahoma Bishop Edward Konieczny, who says he favors the constitutional right to bear arms, hopes the April 9-11 Reclaiming the Gospel of Peace: An Episcopal Gathering to Challenge the Epidemic of Violence conference will be a “model and an example to others of how different voices with often very opposite passions can come together with honesty, charity and grace for a common purpose.” Photo: Mary Frances Schjonberg/Episcopal News Service

“On occasion I have been accused of being a gun-toting bishop,” he said, adding that he sometimes carries a gun while traveling in Oklahoma.

Konieczny shared stories about his life as a police officer, including the time he switched shifts with a fellow officer who was killed by a man wielding a semi-automatic handgun on that shift.

Another time, he said, he responded to a call and a mentally ill man pointed a rifle at his head and pulled the trigger. The weapon misfired.

“But for the grace of God, I would not be standing here,” Konieczny said in an emotion-filled voice.

Rather than become more hardened by those experiences, the bishop said, “I refuse to feel powerless that I can’t make a difference or have an influence.”

Konieczny said he has seen many youths and adults be “renewed, reconciled and restored” by people who practiced the vows of what Episcopalians know as the baptismal covenant to respect the dignity of all people and strive for justice and peace.

“We don’t have to figure out what to do; we just have to do that which we have already promised,” he said, adding that “it is going to take generations” to reverse a cultural reliance on violence that has been built over generations.

“My hope is that this conference will be a model and an example to others of how different voices with often very opposite passions can come together with honesty, charity and grace for a common purpose,” he said.

Konieczny urged participants as they meet over the next days to keep in mind all victims of violence, especially the 20 students and a security guard who were stabbed by a 16-year-old high school student at a high school in Murrysville, Pennsylvania, about 20 miles east of Pittsburgh, early during the day on April 9.

The text of his remarks is here.

The rest of the conference

Following morning worship on April 10, Welby will address the gathering, followed by a press conference with Jefferts Schori. Concurrent workshops round out the morning. That afternoon the Rev. Chuck Jackson, associate pastor of South Grand Lake Christian Church, a Disciples of Christ congregation in Vinita, Oklahoma, will present an interactive discussion titled “Let It Begin with Me.” His presentation will be followed by a panel discussion on Episcopal responses to violence. The day concludes with workshop sessions in the afternoon and evening.

On April 11, the conference continues with a morning of worship, conversation and workshops. In the afternoon, participants will visit the Oklahoma City Memorial and Museum. The memorial and museum memorialize the April 19, 1995, bombing of the Alfred P. Murrah Federal Building by Timothy McVeigh, an act of domestic terrorism that killed 168 people and injured 600 others. Some survivors of the bombing are due to make a presentation to conference participants.

The gathering concludes with Eucharist at St. Paul’s Cathedral, less than two blocks from the site of the Murrah bombing. The cathedral was damaged by the 1995 blast. Jefferts Schori will preach. Dinner, featuring a concluding speech by Diocese of Newark Bishop Mark Beckwith, follows at the cathedral.

A schedule and list of workshop topics and presenters are here.

ENS and others are tweeting from the conference using #peaceokc.