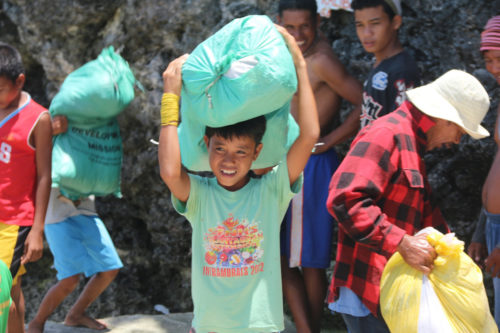 The island of Bantayan counts children in its team of volunteers. The Diocese of Davao supports a continuing relief and economic redevelopment project in Bantayan. Photo: Gideon Bustamante

[Episcopal News Service] Just over a week after the bishop of the newest diocese in the Philippines was consecrated on Nov. 23, 2012, Super Typhoon Bopha hit, killing more than 1,000 people and destroying homes and land. Almost 12 months later, in November 2013, came Super Typhoon Haiyan, killing as many as 10,000 people, making it one of the deadliest storms in the Philippines to date. As the Rt. Rev. Jonathan L. Casimina, bishop, put it, “We began our diocese with a typhoon, and we ended our first year with a typhoon.” 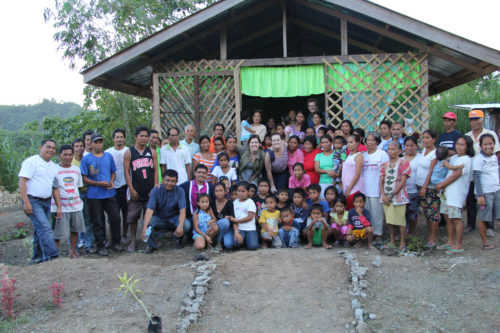 Following destruction caused by Typhoon Bopha in 2012, representatives from the Diocese of Davao provided relief to residents of a small mountain village. Those residents asked the diocese for spiritual support, as well, and Chapel of the Transfiguration, pictured here, was born. Photo: Emily Cherry

In between those environmentally catastrophic bookends came plenty of struggles for the Diocese of Davao in the Episcopal Church of the Philippines, which today is a year and a half old. While facing the usual start-up challenges of staffing, finances and vision-building, the diocese also had to look outward to its community, and quickly determine what role disaster response would play in its ministry. But it’s those struggles that have helped formed the new diocese, according to the bishop. “Even in crisis, there’s always an opportunity for mission,” said Casimina. “And that’s where our church is actually being defined.”

The Episcopal Diocese of Davao is located on the island of Mindanao, in the southern Philippines. When Haiyan – or Yolanda, as it is known locally – hit, it targeted victims a bit further north. As a group that had previous experience responding to natural disaster with Typhoon Bopha, the Diocese of Davao started to mobilize. Within one week, the diocesan youth and the Episcopal Church Women group had hosted a “Dinner for a Cause” to raise funds to support the typhoon victims. High-school students had gone door-to-door to collect more than $2,000 to donate to diocesan relief efforts.

And on the day Typhoon Haiyan struck, the Diocese of Davao released a Letter of Appeal: “As people of faith we are yet again reminded of the powerful symbols of wind and water being both as destructive, as in the case of storms such as this super typhoon, as well as nurturing and life giving, especially in relation to scriptural and sacramental reflection of our liturgical life. Let us not be overwhelmed nor disheartened by all this tragic destruction we see and hear on the news.”

The diocese identified in the tragedy an opportunity for ministry – an opportunity to claim an identity in the face of disaster. Casimina looked at the situation like this: “If we make ministry our priority, God will definitely provide for our needs.” So three weeks after the storm, the diocese organized a team of 30 people – including almost all of the diocesan staff members, some local clergy and a team of medical volunteers from the Diocese of Sebah in Malaysia – to take a disaster response trip to Bantayan Island. 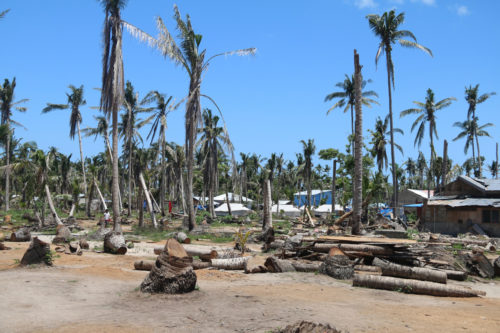 Coconut trees on the island of Bantayan will take a few more years to recover from the damage caused by Typhoon Haiyan. The Diocese of Davao supports a continuing relief and economic redevelopment project in Bantayan. Photo: Gideon Bustamante

Situated in the Visayan Sea, Bantayan is a small island where almost all of the homes were destroyed. Most of the area was completely flooded, groves of coconut trees destroyed and farms leveled. “People were holding onto anything just to survive,” said Casimina. But media and relief efforts seemed to focus primarily on the area surrounding the city of Tacloban on Leyte Island, where the devastation was severe. So the Diocese of Davao decided to focus its efforts on Bantayan instead. The group distributed relief packs full of food, soap and supplies. The medical team performed minor operations, and provided medicine and supplies.

The Episcopal Church in the Philippines does not have any congregations on Bantayan, where the population is mostly Roman Catholic. But, as Casimina explained, “It feels good to help your neighbor… but it feels better to help a stranger … It is incumbent on our part to really help, regardless of what their religion is. That is one of the strengths of the Episcopal Diocese of Davao.” 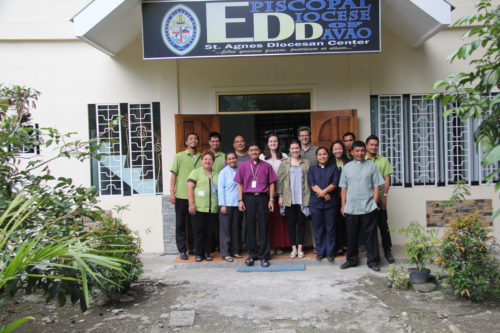 During their visit, the Virginia team toured several dioceses in the north to learn about their ministries and development projects, in addition to a trip to the Diocese of Davao in the south. “We specifically went to Davao because it is a brand new diocese that is looking for international friends,” said Blanchard. “We want to make sure that we are open and receptive to those sorts of opportunities to connect with people who are so eager to share their story.”

The Virginia team spent time with national and diocesan staff, learning about rebuilding and rehabilitation efforts. “The Episcopal Church of the Philippines’ approach to typhoon relief is community-based – and by no means limited to Episcopal communities,” said Blanchard. The Diocese of Santiago, for example, is home to a center that produces food to be shipped to the typhoon victims. And in the Diocese of Davao, Blanchard added, “I was impressed at their willingness to be fearless and to simply go where they felt called, without a lot of hand-wringing – and that’s something we can learn from.”

Now, five months after Haiyan struck, the Diocese of Davao continues its efforts on Bantayan island, moving from the development and relief phase of rebuilding structures to the economic rehabilitation phase. “Maybe we cannot provide all their needs, but at least we can do something to help their livelihoods,” said Gideon Bustamante, program coordinator in the Social Ministry Unit for the Diocese of Davao.

On a recent trip back to Bantayan, Bustamante reported that, while many homes had been repaired, as much as 40 percent of the population was living in shelter boxes and tents in some cities. As a large fishing community, many residents’ incomes are suffering as a result of destroyed boats and nets, and the diocese has plans to help rebuild and refurbish those. They continue to distribute food and relief supplies, as well. Bustamante is coordinating with the national church office to discuss future plans for economic rehabilitation. And the group from Malaysia is making plans to return, along with a youth group from Japan. 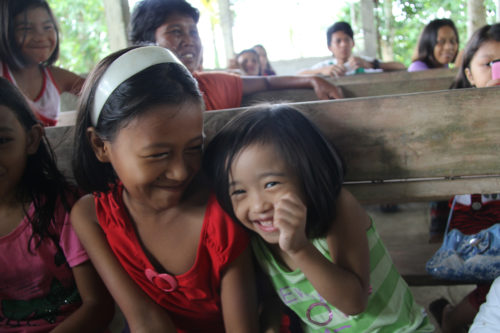 Members of St. Mary’s Chapel in the Diocese of Davao. Photo: Emily Cherry

The church’s response focuses on sustainability and community loan programs – and it’s a churchwide effort. Throughout the process, they’ve found, “Disasters usually bring out the best in communities,” said Floyd Lalwet, provincial secretary for the Episcopal Church in the Philippines. “Our people have become more open to giving to others,” said Lalwet. “There’s an openness to share not only money, but [products] of our own communities.”

A long-standing partner of the U.S.-based Episcopal Church, the Church in the Philippines also has found support from the global community in its typhoon relief efforts, including from Episcopal Relief & Development. In the aftermath of Haiyan, the relief organization spearheaded fundraising efforts, in addition to providing rebuilding support. Sean McConnell and Sara Delaney of Episcopal Relief & Development recently returned from a trip to the Philippines. “When it comes to typhoon relief, the Episcopal Church in the Philippines exemplifies the best in asset-based methodology,” McConnell said. Individual communities analyze their resources and then determine how best they can use those assets to benefit others while sustaining themselves. 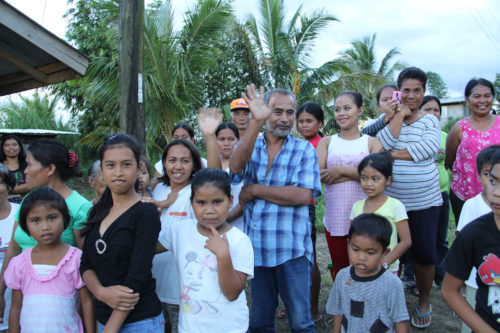 Following destruction caused by Typhoon Bopha in 2012, representatives from the Diocese of Davao provided relief to residents of a small mountain village. Those residents asked the diocese for spiritual support, as well, and Chapel of the Transfiguration, was born. Here, members of Transfiguration welcome visitors. Photo: Emily Cherry

The Diocese of Davao, through its ministry to typhoon victims, is an example of a church that has grown in its openness to giving. The diocese is proud of its Episcopal identity, and dedicated to nurturing it. “The Episcopal Church is too good not to be shared with others,” said Casimina. That maxim held true in the mountains surrounding Davao city. Following the December 2012 Typhoon Bopha, known locally as Pablo, diocesan representatives traveled to outlying areas to offer relief and rebuilding services. In one area, after receiving aid from the Diocese of Davao, the local residents wanted to join and worship in the Episcopal Church. “They asked us not only to sustain their material needs, but to sustain their spiritual needs, as well,” said Casimina. And so the Chapel of the Transfiguration was created in the Diocese of Davao. By reaching out to help a community, the diocese actually grew and strengthened their church.

That mentality and outward-reaching focus has served the Diocese of Davao well in its inaugural year. They’ve created an ambitious agenda which features HIV/AIDs awareness, evangelism and communications, and environmental advocacy. Most recently, the diocese was awarded a United Thank Offering grant for the construction of a cathedral that also will host a sanctuary center for female and child victims of abuse.

It’s this commitment to community that has made their typhoon relief efforts all the more powerful. The Diocese of Davao’s letter of appeal following Typhoon Haiyan continues: “Let not the howling winds nor crashing waves deter us from listening to the still, small voice of God whispering in our hearts to remember and lift up all the typhoon victims in our prayers and, in the compassionate spirit of Christ, to become his hands in reaching out and bringing comfort and consolation to their suffering and grieving hearts in anyway and manner we can in extending our help to them whether in cash or in kind assisting them towards eventual healing and rebuilding of their shattered lives in further strengthening their fervent hope for a new and better life.”

Today, in the Diocese of Davao and the greater Episcopal Church in the Philippines, that commitment to heal, rebuild and strengthen continues.

— Emily Cherry is the communications director for the Episcopal Diocese of Virginia.