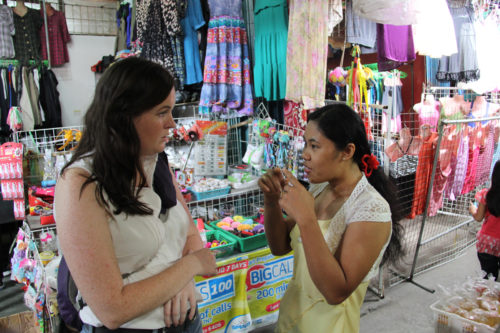 As part of her work with the Episcopal Development Foundation of St. Mark’s in the Diocese of Santiago, YASCer Ashley Cameron visits with market shop owners who receive small business loans from the church foundation. Photo: Emily Cherry

[Episcopal News Service] Almost everywhere you travel in the Philippines, you see rice: steamed and served in heaping bowls on every table; unhusked and drying in the sun alongside roads; bagged and ready to be milled; packed into trucks along the highway; and growing in fields and towering terraces across the landscape of 7,000-plus islands. 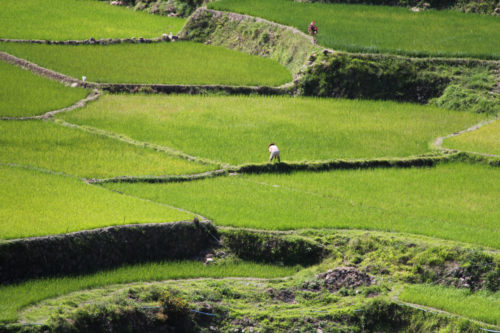 It’s an industry that the nation – and the Episcopal Church in the Philippines – takes seriously. The church is one of the biggest proponents of Systems Rice Intensification, a simple but effective method of planting the fields to produce a higher yield.

Because the SRI crops are planted far apart, the first 15 days of the growing season finds fields looking remarkably sparse – even barren – compared to neighboring fields farmed with traditional practices. In those initial days, before the results start to show, farmers trying the new technique live in uncertainty, hoping and praying it will bear fruit. With rice farming, one could say, it’s important to have a little faith.

The Episcopal Church in the Philippines approaches its ministries holistically, said Floyd Lalwet, provincial secretary. “The church will not just take care of the spiritual lives of the people,” he said, but of the body and mind as well. 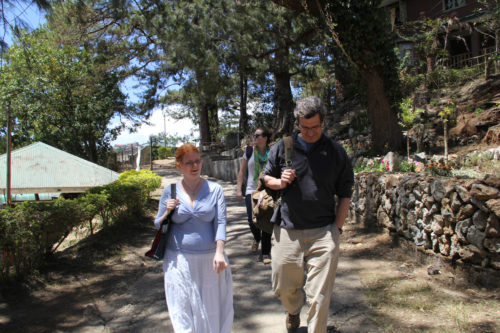 Clinch’s YASC assignment exemplifies that third category. She had requested a placement in the Philippines because of the likelihood of being assigned to a teaching position. Her background teaching through AmeriCorps made her a natural fit for a position teaching at Easter College in the city of Baguio in the Diocese of the North Central Philippines, where she instructs high school students in spoken English and Christian education.

One of the most fulfilling parts of the experience was something of a surprise, she said. The Diocese of the North Central Philippines recently launched its first Lay Theological Institute. When the bishop learned that Clinch majored in biology and religion at college, he asked her to teach a course on the intersection of faith and science. It’s a seminar-style class that emphasizes discussion, using storytelling as a frame for conversation about science and religion.

Storytelling has been a central focus for Clinch’s months in the Philippines, throughout all her ministries. “We understand everything within the context of the stories we tell,” she said.

Clinch tells her own stories on her blog, Service and Stories in the Philippines. All 26 YASC participants stationed across the globe maintain blogs to chronicle and share their journeys, and they also connect frequently via social media. It’s that community of corps members that cinched the deal for Clinch. After attending a discernment weekend with other potential candidates, “I fell in love with the program,” she said. “It is a really great community, and that’s what drew me there.”

Unlike many corps members, Clinch didn’t apply out of a love for foreign travel. Her flight to Manila was her first trip overseas. Arriving, she wondered: Where would her meals come from? How would she overcome the language barrier? 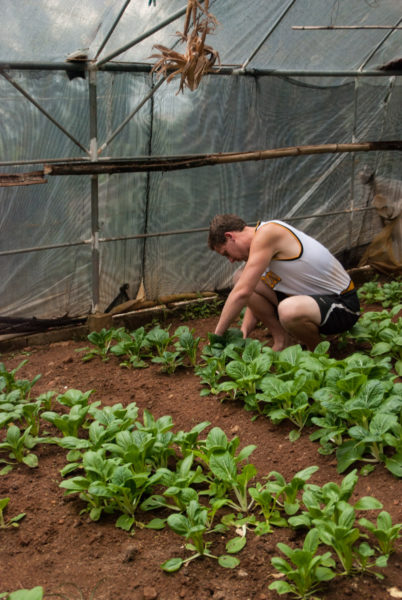 YASCer Andrew Joyce works in the greenhouse at the Tadian Organic and Demonstration Farm, where he works on sustainable agriculture projects. Photo: Emily Cherry

Building and sustaining
For Joyce, the “foreignness” of the YASC experience has been part of the challenge.

“The biggest challenge I have encountered is learning to deal with, and accept, being a minority,” he said. “It’s an eye-opening, enlightening and terrifying experience to walk into a room and have people instantly judge you by the color of your skin.”

Joyce is serving his second year as a YASC missionary, stationed at the Tadian Organic Farm Demonstration and Learning Center in the Diocese of Northern Philippines.

The farm’s goals include expanding the production of organic vegetables and free-range chickens. The grounds house a small laboratory where Joyce and the other farm workers create and test organic feeds, fertilizers and insecticide. Nearby are several stalls for pigs, a large chicken coop and a greenhouse, where the staff test different products. Joyce works with local farmers to show them the benefits – both from a financial and environmental standpoint – to using the farm’s techniques and fertilizers.

“It is intensely satisfying and rewarding to see people applying methods that you taught them, and that they are being successful at it,” said Joyce. “Their smiles and words of thanks are invaluable to me.”

A core tenet of the church is its “receivers to Givers” policy. That means focusing on transforming communities with a history of receiving blessings into communities that give back to others. So the church supports Asset-Based Community Development, partnering with communities to analyze their assets and determine projects to generate income and promote sustainability.

Many of those development projects are part of E-CARE, Enhancing Community Assets through Agricultural Productivity and Rural Enterprise. Most dioceses in the Philippines have an office devoted to E-CARE and development projects, which all focus on providing financial support and social change to local church communities. 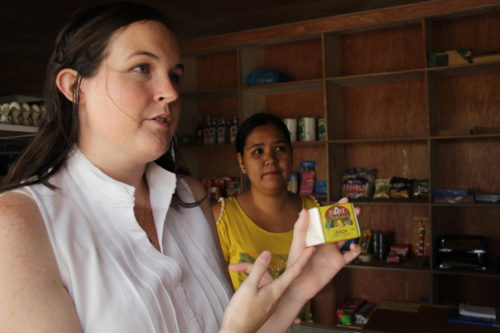 YASCer Ashley Cameron focuses on micro-finance in her work with the Diocese of Santiago. Photo: Emily Cherry

The Diocese of Santiago’s Episcopal Development Foundation of St. Mark’s is another piece of the puzzle, and this is where YASC missionary Cameron fits in.

Cameron said she always knew she wanted to be involved in international mission work. With her love for foreign travel and helping others, she thought the Peace Corps was a natural match. But a priest at her home parish in Leesburg, Virginia, convinced her otherwise by introducing her to YASC.

“I already had the passion for mission and service internationally, so adding the Episcopal Church aspect to the work was the cherry on top,” she said.

Cameron majored in Spanish during her studies at the University of Mary Washington in Fredericksburg, Virginia, so an assignment in the Philippines might not seem like a logical match. But her studies in economics and her experience working with micro-finance projects in Honduras during college made her a fit for the St. Mark’s foundation, a micro-lending institution that offers loans of roughly $100 to $1,000 to more than 1,000 clients in the Santiago city area. Santiago Bishop Alexander Wandag calls the foundation the diocese’s “centerpiece for self-reliance.” In 2013, it provided about $50,000 to support the diocese.

Cameron’s work includes processing loan applications, meeting with applicants and visiting market owners and farmers who receive loans. Recently, a young single mother named Lea came to the foundation. She lived with her parents and had just failed her nursing exams. She needed a loan for her small store to put her life back on track, but she was deemed a potential flight risk, with no collateral.

Cameron worked with the staff to give Lea a small character-based loan of about $100. After two months, Lea had paid back the loan in full, grown her business and qualified for a second, larger loan.

“It was exciting to watch her progress,” said Cameron. “I personally fought for this client.”

Cameron will leave her post in August and plans to move to the Washington, D.C., area to pursue a job in social enterprise or micro-finance. But she will take her YASC lessons with her: the ability to adapt and be flexible; the need for self-awareness and for collaboration.

“Before coming to YASC … I enjoyed doing everything on my own,” said Cameron. “But it’s really taught me that you can’t do it all by yourself, and you’re not supposed to. You can learn a lot by asking others for help.”

And the YASC members have provided help.

The Episcopal Church in the Philippines has a vision: “By the year 2018, we envision a dynamic and vibrant church of caring, witnessing and mission-oriented parishes.” Part of that vision is the church’s heavy focus on key social ministries.

“Social ministry has always been a part of the vision of the church,” said Lalwet. “One of the few remaining institutions where people can find sanctuary from social injustice is the church.”

For the three YASC missionaries in the Philippines, links between faith and community, religion and society, have been a crucial part of their formation.

“We have the opportunity to contribute to the work of a church that is looking outside its four walls to assist local communities regardless if they fill the pews on Sunday,” said Cameron. “It’s truly inspiring work.”

— Emily Cherry is the communications director for the Diocese of Virginia.

Margaret Clinch, Service and Stories in the Philippines: serviceandstories.blogspot.com