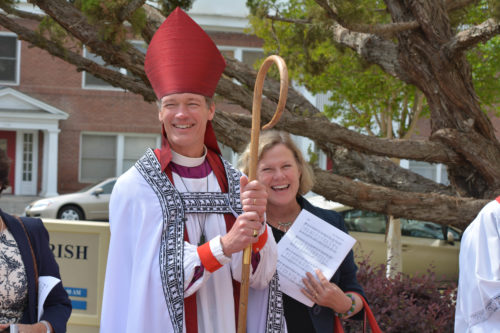 Bishop David Rice and wife Tracy greet well-wishers outside St. Paul’s Church in Bakersfield after he was formally seated as bishop provisional of the Diocese of San Joaquin. Photo: The Rev. Richard Snyder

[Episcopal News Service] In the midst of hundreds of applauding and cheering supporters and well-wishers, the Rt. Rev. David Rice was formally seated March 29 as bishop provisional of the Diocese of San Joaquin in California’s Central Valley.

“I am truly excited about experiencing the many ways in which Episcopalians in San Joaquin will continue to join in and respond to the extraordinary things that God is already doing in the lives of the people of this valley,” said Rice, before the overflow gathering at St. Paul’s Church in Bakersfield. He had been elected at a special convention earlier in the day.

Guest preacher at the festal Eucharist celebrating Rice’s election was Archbishop Philip Richardson of the Anglican Church of Aotearoa, New Zealand and Polynesia, who said he brought a message “to the Diocese of San Joaquin and the wider Episcopal Church in the U.S.A. that the bonds of affection between us are important and strong.”

When Rice and his wife Tracy were called from New Zealand to San Joaquin, it “felt like losing a member of the family,” said Richardson, who is also the bishop of Taranaki. He added that now they are serving another part of the extended family, which is the Anglican Communion.

“In our province of Aotearoa, New Zealand and Polynesia there is an important obligation that we have to members of our extended family – whenever any member of that extended family begins something new or goes to a new place, other members of the family (whanau) go with them to support them and to present them to the people of the place they go to,” Richardson said.

“So that is part of why we come to support our friends and to hand them into the care of those who will receive them.”

Other guests included Bishop of Auckland Ross Bay, a friend and colleague, who said he was excited to support Rice’s next chapter.

“David has a great capacity to befriend people and inspire them through the relationships that he forms. He has a wonderful vision for the ways in which the mission of God can be worked out through the life of the church. He is a hopeful person who imagines a wonderful future for God’s church. I am excited with him for the opportunities that lie ahead in San Joaquin.”

Vicar General Brian Hamilton of the Diocese of Waiapu, where Rice had served previously as bishop, said the diocesan Standing Committee had voted to send him to the seating, “to express the esteem in which he is held and our gratefulness for his ministry among us.”

“We are sorry to lose him but our loss is your gain,” Hamilton said. “He brings energy, an understanding of the needs of today’s church, and the vision and insight needed to lead your church. I wish you every blessing in your life and work together.”

Rice, who was born and raised in North Carolina, served as a Methodist pastor for eight years prior to his ordination in the Anglican Church of New Zealand. He served in parishes and as dean of Dunedin Cathedral in the Diocese of Dunedin, before his 2008 election as bishop of Waiapu.

He and wife Tracy, a family therapist, returned to the United States because of family commitments. Their children – Ian, 20, and Zoe, 18 – will remain as students in New Zealand for the time being.

Rice succeeds Bishop Chet Talton, retired suffragan of Los Angeles, who was elected in 2011 to serve the San Joaquin diocese as bishop provisional.

The Episcopal Diocese of San Joaquin is composed of 19 congregations in the California’s Central Valley.