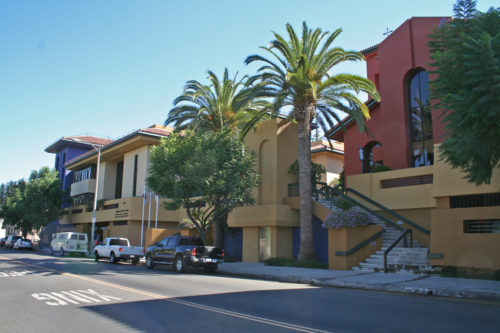 The Cathedral Center of St. Paul is located in the Echo Park area, one of Los Angeles’ most populous neighborhoods. Photo: The Rev. Canon Cindy Voorhees

Some five miles to the south, near the University of Southern California, the landmark Romanesque-style St. John’s Pro-Cathedral serves as a liturgical setting for large diocesan gatherings, a nucleus for interfaith ministry for the six-county Los Angeles diocese and a spiritual center in the midst of a growing downtown “renaissance.”

Together, they form “one ministry in two places,” according to Los Angeles Bishop Jon Bruno, who serves as provost of the Cathedral Center. In 2008, he formally named St. John’s as the pro-cathedral, which means it is a parish church with some cathedral functions, such as hosting the January ordinations of 10 priests, which drew 800 people; the Cathedral Center’s St. Athanasius church seats about 200.

“I wanted them [St. John’s] to be open to being the liturgical hub of the diocese, where we did ordinations … and to hold other large services” which couldn’t be accommodated at the Cathedral Center, Bruno said. 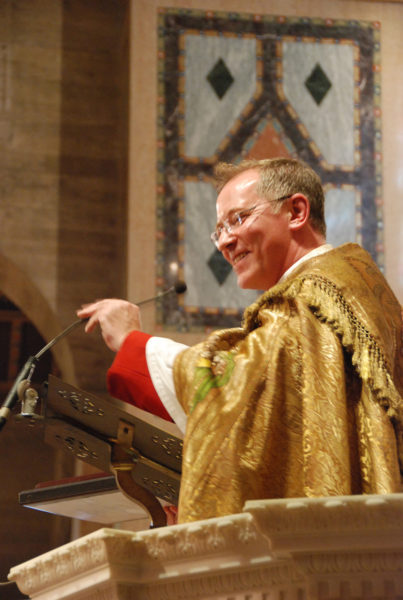 The Very Rev. Canon Mark Kowalewski, dean and rector, says he considers St. John’s “the bishop’s pulpit” and a liturgical and worship space for the diocese, as well as “a house of prayer for all people.”

The two churches are “complementary, and the important thing for me, is they’re both inner city spaces, looking out on the world from where they are, doing exciting ministry,” Bruno said.

He’d spent the previous eight years there as dean and provost (a title he retains) engaging gang diversion, economic justice, HIV/AIDS, interfaith, homeless and other ministries in the community, which is a stone’s throw from both Dodger Stadium and Chinatown.

Echo Park includes one of L.A.’s most populous working class and ethnically diverse neighborhoods, and some gang violence. It has also been, at times, home to the likes of actor Leonardo DiCaprio, musician Jackson Browne and film director John Huston. And the Cathedral Center has been home to community concerts, art exhibits, and spiritual direction led by diocesan writer-in-residence Malcolm Boyd.

All of which has meant trying to “meet the needs of the community in intelligent ways,” said Bruno. The Episcopal Community Federal Credit Union, for example, was founded there in 1992 and has provided financial education and community development, seed money for local small businesses, low-risk loans and relief for those trapped in the vicious cycle of payday lending.

The congregation of St. Athanasius, which celebrates its 150th anniversary this year, holds Spanish, Korean and English-language worship services and is overseen by the Rev. Frank Alton, priest-in-charge. Among the oldest houses of worship in Los Angeles, St. Athanasius held its first service Christmas Day, 1864; its first building was located near today’s city hall and predates the diocese by about 30 years.

The first rector gained notoriety for his public eulogy for Abraham Lincoln, and the congregation helped establish Good Samaritan Hospital in 1886. The hospital made history a century later with the world’s first live birth from a frozen embryo and has been named one of “America’s Best Hospitals for Top Medical Care in 16 Specialties” by U.S. News and World Report.

There is precedent for pro-cathedrals in the diocese.

Bruno noted that L.A.’s first bishop, Joseph Horsfall Johnson, gave that designation in 1899 to St. Paul’s, renamed when some St. Athanasius members erected a church at a new location, now the site of the Biltmore Hotel. Later, a newly built St. Paul’s was dedicated as the first cathedral, but eventually earthquake damage forced demolition of that building.

Another branch of the congregation in 1899 reclaimed the name St. Athanasius and in 1917, moved to the Echo Park location where the Cathedral Center of St. Paul is now located, uniting both congregations.

Los Angeles-area Episcopalians will revisit that history and envision future ministry during the Dec. 5-6 annual convention meeting of the diocese, themed “Horizons and Heritage.”

The 2008 dedication of St. John’s as pro-cathedral “has been a good balance and use of space,” Bruno said. “Neither site is totally overtaxed; it provides what the diocese needs and, God knows, this diocese needs more than one space to do ministry. It’s a model for future collaborative ministry.” 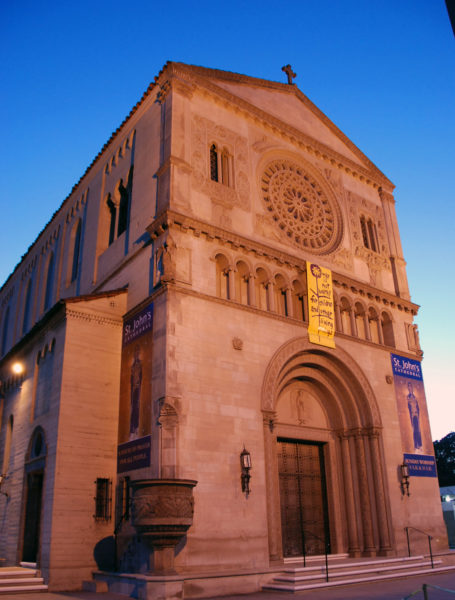 St. John’s Pro-Cathedral is positioning itself to be part of “the new downtown” a renaissance of change happening in Los Angeles. Photo: Chris Tumilty

St. John’s: Radical hospitality, a ‘house of prayer’ for all
The ministry of St. John’s as a pro-cathedral “challenges all of us to radical hospitality … which fits well with our spirituality of mission, seeking to proclaim Christ and God’s kingdom outside the doors of the church and welcome all who come to us,” Kowalewski said when the congregation was contemplating the 2008 change.

Currently, the Guibord Center, a nonprofit ministry dedicated to furthering interfaith and ecumenical understanding and collaboration, is headquartered there.

“Churches have to think about our spaces more creatively,” Kowalewski said recently. “How do we take buildings that for years were used only for Sundays and major liturgical celebrations and are beautiful and large and rework them in such a way to be multi-purpose environments, not just for worship but social gatherings and arts events and all of those sorts of things?

“I don’t think the church is at a place anymore that we can allow these edifices to go unused to the extent they have historically,” he added. “It’s incumbent to rethink how to use our church buildings in more creative ways.”

Listed on the national register of historic landmarks, St. John’s was first organized as a congregation in 1890. The original church was built the same year, a wood-shingled Gothic revival style building in an orange grove on the city’s edge, next door to the present location on West Adams Blvd.

Then, St. John’s – modeled after the 11th century San Pietro church in Tuscania, about 75 miles northeast of Rome – was located in one of the city’s premiere neighborhoods, Kowalewski said.

But over time, the population shifted, and the congregation became increasingly diverse, including predominantly African Americans, people from the African diaspora and the LGBT community, he said.

Now, drawing increasingly from the university community and with yet another demographic shift underway, St. John’s is again contemplating creative ministry and use of building space while positioning itself as part of a new “downtown renaissance.”

Included in that creative ministry is a leadership sharing with the Rev. Daniel Ade that, Kowalewski said, is in many ways like job sharing. They consider themselves co-deans – with vestry approval after a two-year trial period. They share responsibilities for oversight of St. John’s, pastoral and other ministries.

In the context of community, it just makes sense, Ade said. “It’s part of the priest’s job anywhere to lift up gifts of other people,” he said. “Mark is an extraordinary teacher; it’s not my best skill so I rejoice in that. I think that’s great so let me take some things off your plate so you can be your best at that.”

At the same time, sharing the ministry affords him the opportunity to reinvent a vision for his own ministry: “for a long time, I was point person for buildings and grounds. I just came back from sabbatical and said I’d like to do some other things, newcomer incorporation because you can burn out on something. I felt like I want to have a new vision, to do more pastoral care. It gives us freedom to move the pieces around here.”

It is similar to co-rectorships in that “canonically speaking, there is the office of the rector and two people who share that ministry. We see ourselves that way. For example, if we were in a vestry meeting and there was a need to vote and the rector’s vote needed to be cast, we would have one vote, not two.” If they disagree, “we talk it out in the context of community,” he said.

St. John’s is known as “liturgically funky in some ways, and in other ways, very conservative theologically“ and is preparing to replace church pews with stackable chairs, according to Ade.

The liturgically “funky” part means: “The bishop has given us permission to borrow from the whole banquet of our liturgical tradition and from Jewish tradition, evangelical Protestantism, and from the Roman Catholic Church,” Ade said.

Each week in Lent, for example, the congregation gathers at the baptismal font at the church entryway for intercessions and catechumens are blessed. All Souls celebrations have incorporated, from Latin American traditions, ‘Dia de los Muertos’ altars crowded with mementos acknowledging that loved ones “are in Christ’s care”, as well as the recitation of the Kaddish, the Jewish prayers for the dead.

Recently, St. John’s hosted a two-week theatrical run of “the Elephant Man” and has named the Ensemble “N2K” — Juilliard-trained musicians Katherine Cash and the Rev. Norm Freeman — as artists-in-residence.

And, when local officials dedicated a nearby rail transit station on a Sunday, “the entire congregation processed with incense and holy water, and blessed the station and trains as they came by.”

Once again, the duality of pro-cathedral and community church is present as the congregation grapples with “opening up its identity” in the face of 21st century realities, Kowalewski said.

“We think one of the things about the new downtown is that it also is very diverse population and that’s what’s exciting about St. John’s, too,” he said.

“We try to intentionally create a community that is culturally diverse. We are trying to have a progressive social witness that the Episcopal Church is great at, on the one hand. But, also to present it in the way we present the Gospel of Jesus Christ — in a clear way and not an apologetic way – that gives people something to believe in as well, so that the social witness comes out of a clear proclamation of the Kingdom of God and the Gospel.”