[Episcopal News Service – Dillon, Montana] When winter drove snow and cold up against the Continental Divide in southwestern Montana this season, the arrival of the self-proclaimed Woodchucks or Woodchicks with a load of firewood from the Tri Parish Wood Bank was a welcome sight.

“We’re commissioned to serve and commanded to love and this is how we do it,” the Rev. Sue Eades, rector of St. James, said recently while volunteers using chain saws and two log splitters cut up some of the last wood remaining in the ministry’s Dillon work site.

“It’s just a blessing to everyone to be able to serve those who otherwise might not be warm in the winter – couldn’t afford to heat their house,” Eades said of the three-parish partnership. “It brings us all together in the name of Christ without arguing over theology or piety or whatever.”

For St. Paul’s in Virginia City, which holds the distinction of being the first Episcopal congregation in the state, the wood bank is proof that a small church can have a big ministry.

“We’re the only church in town and we have 18 people attend – 18 to 20 – through the winter, which is great because we’ve had four to six for many years,” said Micki Benedict, a member of St. Paul’s and a Woodchick. “It’s a way for us to show our little community that we’re not just here to have the Eucharist every Sunday or to have coffee hour; we’re here to help anybody that we can help.”

Figures aren’t in for 2014, but last year the Rev. Harry Neeley, an 80-year-old priest who runs the ministry despite calling himself retired, and 100 volunteers brought 296 cords of wood to 644 people, along with 82 dozen eggs and 200 hats and mittens. The volunteers delivered those supplies during 196 trips to people in 16 towns. In addition, three families anonymously donated $3,000 to provide wood bank clients with school needs, food and Christmas gifts.

During January and February of this year, Neeley said, the wood bank set records for deliveries as blizzards and extended periods of below-zero weather – and the spike in propane prices across the West – made the need for wood even more acute. The volunteers have been delivering to “people that we’ve never seen before,” he said.

About 10,000 people are scattered over about 10,000 square miles of the wood bank’s territory that runs from Wisdom in the west 100 miles east to Virginia City and from Monida on the Montana-Idaho border north 100 miles to Waterloo. Montanans like to say that their state is “high, wide and handsome” and the wood bank’s range is home to huge ranches, world-class trout fishing – and the environmental legacy of the gold rush era. The 20-mile drive from Sheridan to Virginia City reveals hill upon hill of tailings left behind by miners who labored in the 1860s and beyond along Alder Creek.

The wood bank’s clients, 60 percent of whom heat only with wood, rank mainly in the lower five percent of family or household income the area. They range in age from infants to a 95-year-old woman who cooks on a woodstove. She is one of two clients who uses wood to cook.

People are referred to the ministry by area social service agencies plus word of mouth. Generally, clients need to meet federal food assistance eligibility requirements, although Neeley says that “as a Christian organization we make allowances.” 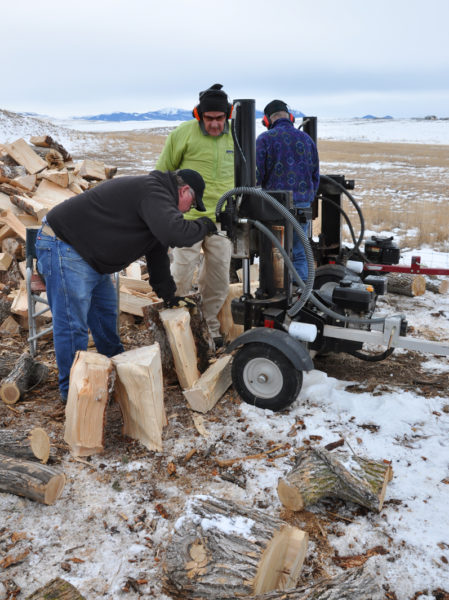 Tri Parish Wood Bank volunteers use log splitters to break up some of the last firewood of the ministry’s 2013-2014 winter season. Photo: Mary Frances Schjonberg/ENS

“In the name of Christ, helping keep warm those who live in the shadow of the American dream,” is the wood bank’s mission statement.

“And we’ve really tried to live up to that and live into that both,” Neeley said as he drove in one of the wood bank’s trucks between Dillon and the ministry’s other work site in Sheridan. And the volunteers aren’t just Episcopalians, he added, listing “atheists and Presbyterians and Baptists and Methodists and Catholics.”

The 112 wood bank volunteers who worked in 2013 put in 3,546 hours of labor, according to the ministry’s annual report. The wood bank has no paid personnel. Someone, often Neeley, can be reached for help 24 hours a day, 365 days a year via a cellphone that rotates among the volunteers.

Some of those work hours have been logged by young people with court-ordered community service requirements and participants in the Dillon-based Youth Challenge Academy, a National Guard-run program for high school dropouts.

Many wood bank clients also provide hands-on support, either by coming to collect donated wood or by helping to unload it at their homes or at other clients’ homes, according to Head Woodchuck Neeley, who most days can be found on the job in his insulated overalls flecked with sawdust and chainsaw grease.

Sometimes, Neeley said, the clients donate small amounts of money to the ministry. He calls it the alms of the poor because “I know what kind of pocket it’s coming out of.”

While the wood bank’s main financial support comes from the three parishes and the United Way of Beaverhead County, dozens of individuals contribute amounts ranging from those “alms of the poor” to $1,000. A variety of Montana-based foundations also have contributed as has the Diocese of Montana.

United Thank Offering gave the wood bank an $8,500 grant in 2013 that paid for hydraulic lifts on both of the ministry’s delivery trucks, nearly bringing an end to hand unloading (sometimes snow on a truckload means a few logs get frozen to the bed and need personal attention). The UTO grant will also cover the cost of a conveyor to move wood mechanically into the delivery trucks or onto piles at the two work and log-storage sites on the Bump Ranch outside Dillon and by the side of Mill Creek Road outside Sheridan. 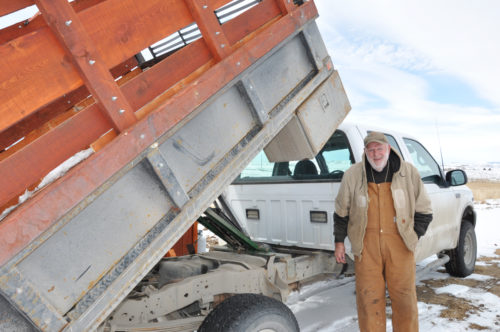 The communities’ support of the ministry extends beyond those funding agencies. For instance, just before Shrove Tuesday earlier this month, the greeter sign on Stockman Bank in Dillon reminded passersby that proceeds from St. James’ pancake supper that evening would go to the wood bank.

And then there’s the wood itself. The U.S. Forest Service gives the ministry access to harvestable trees through its firewood permit process. A sawmill in Argenta near Dillon donates wood it classifies as waste and the Dillon Tree Board donates any tree it removes from around the city to the wood bank.

Plus, “people just give us gifts of wood,” said Neeley, including a rancher who thinned some stands of trees on his land and donated four logging truck loads of wood. In all, the ministry was gifted with 244 cords of wood in 2013.

The financial and material donations have increased over the years, Neeley said, as the wood bank has gotten “more well-known and more trustworthy.”

And the wood bank has got secular recognition for its ministry. The most recent honor came in early February when the wood bank was one of eight programs and individuals honored by Serve Montana, a volunteer-promotion effort of the state governor’s office.

“It’s just rewarding. I know that Christ has blessed us; we have been blessed in so many ways by financial gifts and recognitions that weren’t sought but given,” Neeley said. “That’s kind of how I measure how we do; how we’re doing with our people that we serve and how we’re viewed in the community and the state. And it’s been good.”