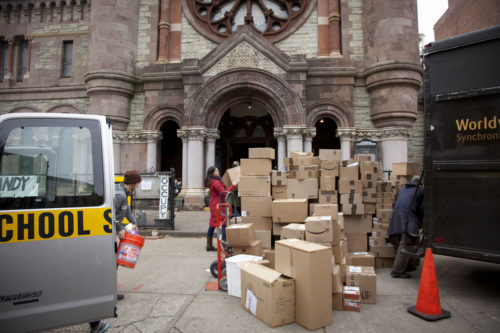 [Episcopal News Service] The Occupy Sandy network that sprung up in the days after Hurricane Sandy devastated vast stretches of New York and New Jersey has caught the attention of the U.S. Department of Homeland Security, which says it is looking to broaden future disaster relief efforts.

However, not everyone is taking that explanation at face value even though they say the report does a good job at outlining how well Occupy Sandy has worked.

Occupy Sandy tapped into the organization and volunteer power of Occupy Wall Street which had led a multicity protest movement centered on economic inequality just more than a year before Sandy hit. The report, titled The Resilient Social Network, calls Occupy Wall Street a “planned social movement” while it characterizes Occupy Sandy as “neither planned nor expected.”

“In the days, weeks, and months that followed, ‘Occupy Sandy’ became one of the leading humanitarian groups providing relief to survivors across New York City and New Jersey,” the report notes. “At its peak, it had grown to an estimated 60,000 volunteers – more than four times the number deployed by the American Red Cross.”

“Unlike traditional disaster response organizations, there were no appointed leaders, no bureaucracy, no regulations to follow, no pre-defined mission, charter, or strategic plan.  There was just relief.”

That relief effort out of St. Luke and St. Matthew continued even after an arson fire two days before Christmas 2012 caused major damage.

“In the Diocese of Long Island, where this movement took physical root in several of our churches, we were fortunate to have a bishop who encouraged Occupy Sandy in every way possible,” the Rev. Michael Sniffen, rector of St. Luke and St. Matthew, told Episcopal News Service. “In places where our bishops and clergy gave in to fear and risk aversion in the aftermath of the storm, the work of well-intentioned, skilled neighbors was often thwarted by lack of staging and organizing space. Many of our churchyards, hallways and unused parish halls sat empty during a time when they were desperately needed.”

Long Island Bishop Lawrence Provenzano said the diocese is “very proud of its involvement with Occupy Sandy and the results.” 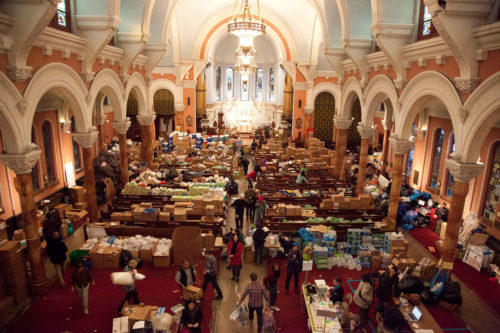 “From a religious standpoint, this was the church at its best, an example of the Gospel in action,” he said in an e-mail to ENS. “This report is really an acknowledgment of how a cooperative effort – between the church, government entities, the private sector, and the wider community – can improve disaster response in the future. It is also an acknowledgement that cooperative decision-making, planning, and execution can be a model for success; this model, in my mind, is as ancient as the church itself.”

Research for the report was conducted between June and August 2013. The report is dated Sept. 30, 2013 and was recently released by the Homeland Security Studies and Analysis Institute.

In its introduction, the report notes that Occupy Sandy was a “difficult research subject for many of the same reasons it succeeded in helping so many communities in New York and New Jersey: its membership and infrastructure are fluid, it has no elected leaders, and it conducted autonomous relief activities across a large geographic area.” Occupy Sandy is called a “humanitarian offshoot of Occupy Wall Street” in the report, whose authors also describe it as “a social movement, not so much a tangible group.”

The report at one point categorizes Occupy Sandy as an “emergent response group 2.0” of the kind that often spring up spontaneously after disaster strikes. These groups are different from “traditional response organizations,” the report notes, such as the Federal Emergency Management Agency or the Red Cross. The “2.0” refers to the fact that groups such as Occupy Sandy used social media to publicize, organize and coordinate its work.

A small group of Occupy Wall Street began discussing the anticipated storm a week before it hit the East Coast over social media, the report says. When the storm hit on the night of Oct. 29, 2012, member of that group began share damage reports and discuss how to help and whether there was interest in beginning a relief effort.

“Seemingly out of nowhere emerged a volunteer army of young, educated, tech-savvy individuals with time and a desire to help others,” the report says.

However, the report also notes that Occupy Sandy’s “horizontal organizing structure” was not without its problems. While “there was no need to seek permission to do something” and thus people in need were served quickly, the report says “without leaders, there was less oversight” and less accountability. The accountability issue raised difficulties for some traditional response organizations in terms of their own accountability, according to the report.

Purpose of the report questioned
The authors said their “primary purpose in conducting a case study on Occupy Sandy is to provide the Department of Homeland Security (DHS) with a basic understanding of an emerging type of grassroots relief collective so that it might enable government to work in a unity of effort with such groups when the next disaster strikes.”

However, the report also describes reluctance on the part of some Occupy Sandy participants to talk to a group connected with the Department of Homeland Security about their work. Most of the people and organizations the researchers contacted “were willing to speak quite candidly, but many respectfully declined our request,” according to the report. The report does not suggest the reason for that reluctance however, the Department of Homeland Security has acknowledged, by way of more than 200 pages of heavily redacted documents, that it joined other law enforcement agencies to monitor Occupy Wall Street.

Sniffen echoed some of that concern, saying that “the DHS’s interest in the Occupy movement and Occupy Sandy in particular raises red flags regarding the freedom of communities to organize for good without being treated as suspicious.”

“That being said, the findings of this report are encouraging,” he added. “The report is clear in its analysis that Occupy Sandy was effective where larger, more bureaucratic organizations were not. The movement’s significant role in helping communities recover is now undeniable. The analysis of the ability of horizontal ad hoc groups to be effective change agents in the world should be read, marked, learned and inwardly digested by The Episcopal Church as we continue our own conversation about internal restructuring.”

The Rev. John Merz, the vicar of Church of the Ascension in Greenpoint, Brooklyn, who helped organize churches to open their facilities to respond to Sandy, also expressed concern about the DHS institute’s attention to Occupy Sandy. He noted that the organization’s website says it was created as a “dedicated, not-for-profit institute to provide the federal government with analytic capabilities to support effective counterterrorism-related decision-making and program execution.”

The department has always regarded Occupy Wall Street “as a form of active domestic terrorism albeit in the early stages of gestation” and thus it took notice when some participants “reformed around relief work with such astounding capacity,” Merz said.

Even though the study is what Merz called “appreciative,” it “is by nature defensive, given the mission of the institute and the larger mission of DHS” and is centered on the issue of “power and how it is exercised.”

“I did not see anywhere in the report analysis of how many soup cans churches or civic groups managed to donate or how many people made peanut butter and jelly sandwiches … its concern with power in this case is that it was employed so effectively by a group that it has had under surveillance and was working for structural change and justice,” he wrote in an e-mail to ENS.

While the report might be used to help non-governmental organizations and governmental aid agencies adopt new practices, Merz said, it is more likely that it will be used to “keep a thumb on social grassroots movements and networks.” He predicted that the department and the U.S. military “may use the report to incorporate some of the OWS and OS network practices into their own ‘counter terror’ practices if they would serve in curtailing the power of people to organize on a grassroots level.”

That opinion, Merz acknowledged, “may put me in the minority in the Episcopal Church who seem to think Empire is only something to be ruminated on and preached about in relation to Jesus and the Romans.”

Merz and Sniffen were both involved in Occupy Wall Street and were arrested Dec. 17, 2011 after they and retired Episcopal Bishop George Packard entered a fenced property – owned by Trinity Episcopal Church, Wall Street – in Duarte Square in Lower Manhattan as part of Occupy Wall Street’s “D17 Take Back the Commons” event to mark three months since the movement’s launch.

The report says other traditional response organizations were initially guarded about coordinating their work with Occupy Sandy. For example, the report describes an invitation-only telephone conference call in early November 2012 “amid the fog of the response to Superstorm Sandy” during which participants heard someone identify themselves as “this is Occupy.”

“Conversation stopped,” the report says and representatives of other relief agencies later told researchers that they wondered why Occupy Wall Street was present.

The Occupy Sandy person, whose name is not disclosed, was asked to explain his or her presence and the person replied that Occupy Sandy was “part of Occupy Wall Street but not directly associated with it,” according to the report.

“‘At that point, we all became very guarded in what we said,’ the official told us,” the report continues. “Personally, and here she said she could not speak for the group, she perceived that the uninvited caller was a protestor and remembers thinking ‘we know what we are doing here, they just do not get it.’”

The report’s authors conclude that Occupy Sandy not only eventually convinced the unnamed official that its participants “get it”; it also convinced local communities, the mainstream media and those 60,000 people who signed on as volunteers.