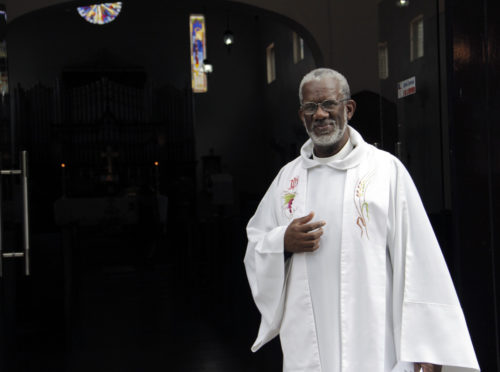 The Very Rev. Ashton Brooks is the dean of Epiphany Cathedral in Santo Domingo, in the Diocese of the Dominican Republic, and dean of the Center for Theological Education, the seminary of Province IX. Photo: Lynette Wilson/Episcopal News Service

Brooks, the dean of Epiphany Cathedral, is one of more than 10 in his family, seven still serving in active ministry, to have served the church. He has been ordained and engaged in active ministry for 45 years.

“I came back because I am a dreamer,” said Brooks, who was born in the San Pedro de Macorís, a community about an hours’ drive east along the Caribbean coast.

Brooks also serves as the dean of Center for Theological Studies, which shares property in the Gazcue section of Santo Domingo with Epiphany Cathedral. The center now serves as the official seminary of Province IX, including seven Episcopal dioceses spread across the Caribbean, Central American and northern South America. At present there are five resident seminarians, four Dominicans and an Ecuadorian.

His dream, he explained, is to expand the Center for Theological Studies and move it to another location.

An emphasis on education has been at the heart of Brooks’ ministry. It’s also a top priority of the Diocese of the Dominican Republic where about half of the diocese’s 55 missions have affiliated schools, reflecting the church’s commitment to education.

“The churches and the schools have moved hand-in-hand in this diocese,” said Brooks. “The way to help people out of dire straights is to give them the opportunity for education.”

When asked about what drives him, Brooks thought back to classes he took at Harvard Divinity School with Old Testament scholar Paul Hanson, who in addition to teaching at Harvard taught Sunday school. Hanson would say that his academic accomplishments didn’t mean a thing if he wasn’t “able to relate to children at Sunday school,” said Brooks. 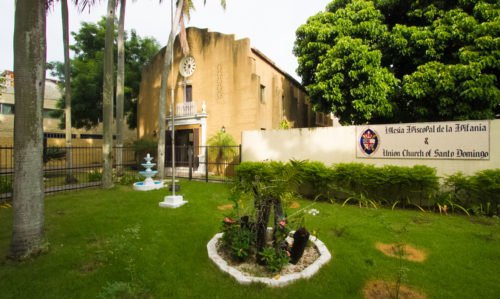 Epiphany Cathedral is located in the Gazcue section of Santo Domingo. The Episcopal presence in Santo Domingo dates back to 1918 Photo: Julius Ariail

Moving the seminary from the cathedral would also have the added benefit of freeing up the space to add a primary school to the cathedral’s outreach ministries, said Brooks. In addition to worship services, the cathedral runs a weekly feeding program, a monthly food pantry, the Helen F. Kellogg English-language library and a daycare for las ovejitas, “the little sheep,” among other programs to serve the community.

“Education is the road to help people in their lives,” he said. “My vocation has always been education.”

Brooks graduated the Autonomous University of Santo Domingo, the oldest university in the Americas, and also earned degrees from the Episcopal Seminary of the Caribbean, formerly located in Puerto Rico, and The General Theological Seminary in New York. He also studied at Episcopal Divinity School in Cambridge, Massachusetts. Church Divinity School of the Pacific, the Episcopal seminary in Berkely, California, awarded him an honorary doctorate in 1993.

Interestingly, it was during Brooks’ compulsory military service, during Rafael Trujillo’s military regime, when he realized he was called to serve the church. Each morning Brooks would lead a Bible study as an incentive for the soldiers to be on time for the 4 a.m. drill, he said.

“’The Lord is carrying you to this service’” he was told at the time, he said, and it was then he began exploring ministry.

On Sunday mornings, Epiphany hosts two services, one at 8:45 a.m. in English, which is lightly attended, the other at 10:45 a.m. in Spanish that draws a much larger crowd. 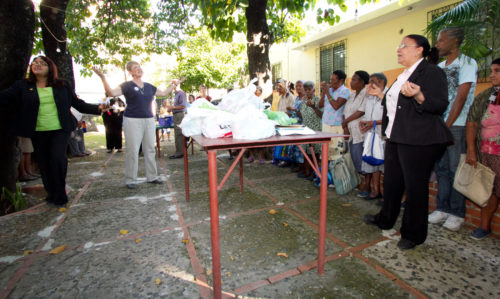 During an interview with Episcopal News Service in his office at the cathedral, Brooks explained that the Episcopal presence in Santo Domingo dates back to 1918, two years after the United States occupied the island, an occupation that lasted until 1924.

At first, the Episcopal presence began as a mission serving the English-speaking U.S. military and their families and the expat community.

(Brooks’ great-grandmother on his father’s side was Anglican.)

Both as a scholar and a teacher, Brooks has worked to discover, interpret and articulate the Bible in a way that reflects the uniqueness of the people and the culture of Latin America.

He sees his ministry as rooted in “trying to help people seek peace and understanding among each other.”