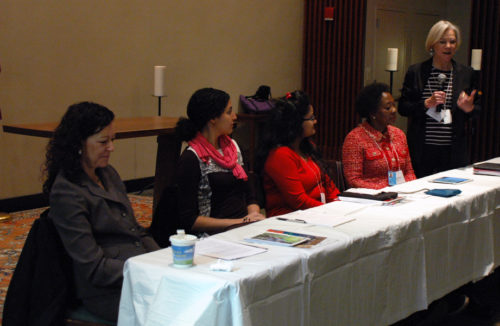 [Episcopal News Service] When Granny Seape worked in the credit departments of two different banks in post-apartheid South Africa, she grew tired of managers who refused to see that “if you invest in a woman, you are investing in the whole nation.”

Seape, an Anglican Consultative Council delegate to the March 10-21 session of the United Nations Commission on the Status of Women, came to those banks after working with the U.N. High Commissioner for Refugees to resettle people back into South Africa after the end of apartheid and then working in the Southern Africa division of the World Bank in Washington, D.C.

When she returned to South Africa, Seape worked in the low-cost housing mortgage divisions of first one and then a second national bank. At both banks, she realized that managers were systematically refusing to give small mortgages to low-wage earners, especially black women who had been domestic workers during the apartheid years, she told a March 12 gathering at the Episcopal Church Center in New York.

Eventually, Seape decided to start a construction company in 1998 to build good houses for low-income people. Since its beginning, Ahanang Hardware & Construction has built more than 15,000 homes, she said.

Ahanang means “let’s build together” and Seape explained that the company’s first project established the empowerment model it still uses. The project in an underserved area recruited local women to learn basic construction skills and related trades such as making concrete blocks and window frames. Seape said the company and the local women built 2,000 homes and some of those women also built small businesses out of the trades they had learned.

“Every area that we went into, we would train the women first and ensure that they get part of the development as their own project,” Seape explained. “Everywhere we go we make sure that we empower women.”

Financial empowerment, she told the gathering, is a way to empower women to overcome abuse, illiteracy and other issues.

That interrelated nature of women’s empowerment was the broad topic of the March 12 panel discussion at the church center. The panel had a more specific emphasis on the integration of access to women’s medical services as a path to empowerment, not just for women but for their families and their communities.

“Women are the lynchpins across so many sectors,” is how panelist Ann Starrs, president of Family Care International, explained the connections.

But, she said, too often services such as medical care for low-income women are “siloed” in terms of delivery and in terms of evaluation so that women and their children may have to go to multiple clinics to obtain all the services they need. This happens in poorer countries, she said, because donors tend to provide money for specific issues or to specific segments of the population.

Advocates need to convince governments and non-governmental organizations to pay for and favor better-integrated delivery systems, she said.

“You need to look at this from the woman’s perspective,” Starrs said. “Every time she walks into a clinic with her children, her newborn, maybe her husband, are all members of that family getting the services they need in that clinic on that day? We really need to push for this women-centered approach.”

“The MDGs set this framework and the funding followed accordingly,” Rojhani said, so that governments and other organizations funding programs centered on one disease or one hoped-for outcome.

“We think it is nothing short of malpractice for somebody to go to a clinic for their anti-retroviral therapy and they don’t get their blood pressure checked,” she said.

In addition, Rojhani said, the health-related MDGs “have been tremendously successful in improving health outcomes around the world, but one of the critical oversights of this MDG framework was the exclusion of non-communicable diseases.”

The alliance, which focuses on global impact of non-communicable diseases such as cancer, heart and chronic respiratory diseases and diabetes, wants global health and development policymakers to consider the health-related results of tobacco use, harmful use of alcohol, poor diet and physical inactivity.

Ayra Inderyas, secretary of the women’s desk in the Church of Pakistan’s Diocese of Lahore, used the term “simultaneous intervention” as another way to describe the needs to empower women in a multidisciplinary way. The diocese uses small community-based groups to empower women with a range of education and services from hand water pumps to Bible studies about gender justice.

She said the diocese’s work takes place in a country where Christians are a distinct minority and that Christian women are thus in double jeopardy. “And if they are poor, then they are facing triple jeopardy,” she added.

Presiding Bishop Katharine Jefferts Schori March 12 greeted Anglican and Episcopal participants in the 58th session of the United Nations Commission on the Status of Women. “The advocacy work that you are doing here and the empowerment work you are doing in your own contexts makes an incredible difference,” she said. “I wish you well. I pray for your work these two weeks. I pray that you may continue to be effective agents of change and transformation in this world. That’s what we are about in seeking the kingdom of God.” Photo: Mary Frances Schjonberg/Episcopal News Service

Panel moderator Lucille Pilling, the Episcopal Church’s representative to the current UNCSW session, said at the end of the session that the “takeaway” for her was the importance of working together “to create that groundswell – that demand.

The theme of the current UNCSW session is “challenges and achievements in the implementation of the Millennium Development Goals for women and girls.”

Anglicans and Episcopalians were selected by their primates to attend on behalf of their province and will be monitoring plenary sessions and attending parallel events (panels and meetings) on topics that all speak to that theme.

A summary of the rest of the Anglican/Episcopal-related UNCSW activities is here.