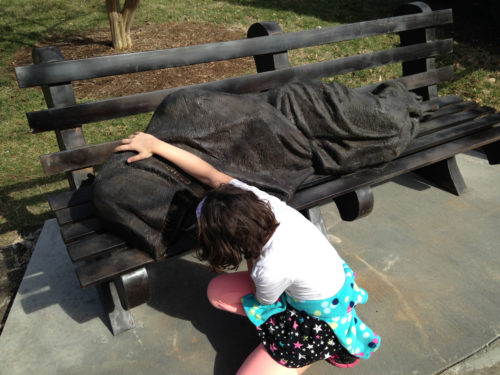 The “Homeless Jesus” sculpture is designed to be interactive and has drawn the attention of adults and children alike. Photo: Alleen Barber

[Episcopal News Service] Downtown Davidson, North Carolina, has all of the idyllic, small-town Southern charm a weekend visitor could want: old-fashioned brick sidewalks, quaint shops and lots of leafy trees. Residents of the town, known primarily for its prestigious liberal arts college, are proud of their postcard-ready community, but the recent installation of a sculpture outside of St. Alban’s Episcopal Church has reminded locals that not all members of the affluent community can afford to live in the town’s beautiful homes – or in permanent housing of any type.

A new arrival in the neighborhood
The sculpture, “Homeless Jesus” by Canadian artist Timothy Schmalz, is a life-size bronze that depicts Jesus as a homeless man huddled in a blanket and sleeping on a park bench. The blanket’s folds hide the man’s face, and the only clues to his identity are the crucifixion marks through his feet and a nearby plaque revealing the piece’s name. From a distance, it is easy to mistake the sculpture for a living person. Situated in front of St. Alban’s at the entrance to the upscale St. Alban’s Square neighborhood, the artwork rests in stark contrast to its surroundings. 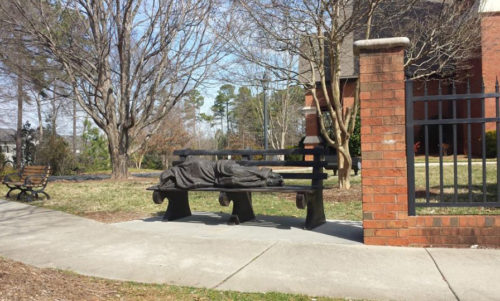 From a distance and especially in low light, the sculpture looks like a living person. Photo: Susan McCoy

The sculpture is a memorial to late St. Alban’s parishioner Kate MacIntyre. Her husband, former St. Alban’s senior warden Peter Macon, and family friend Martin McCoy, who donated the funds for a piece of public art in MacIntyre’s honor, spent years searching for the right memorial.

“It struck us that we wanted to challenge the parish,” Macon said. “This sculpture offers a very clear message of discipleship. Once we found [the sculpture], it took us about 18 seconds to decide this is what we wanted to do.”

Responses from across the country have poured in since the sculpture’s installation on Feb. 21. Interest from media outlets have ranged from Charlotte’s local NPR affiliate to the CNN Belief blog to the digital version of London’s Daily Mail. The Davidson Police Department reports receiving calls from neighborhood residents who believed the sculpture was a real person. One caller even expressed concern about the sculpture’s bare feet and thin blanket and volunteered to take the man chili and water. Staff members at St. Alban’s say visitors continue to snap photos, leave flowers and sit on the exposed section of the sculpture’s bench.

“People we do not know have been walking into the church cold just to tell us how much they appreciate the statue,” said the Rev. Greg McIntyre, associate rector at St. Alban’s and Episcopal campus minister at Davidson College. “We’ve been getting e-mails from as far away in Oregon to support this.”

While the clergy at St. Alban’s say responses to the piece have been overwhelmingly positive, the sculpture also created some controversy in the community, driven largely by strong backlash to critical comments two residents made through local news sources. The author of one letter to the editor published on the local news site DavidsonNews.net shortly after the sculpture’s installation wrote, in part, “I have stepped over actual homeless people sleeping on a sidewalk in New York City and not been as creeped out as I am walking past this sculpture.” Another resident of the St. Alban’s Square neighborhood told the local NBC affiliate she called the police out of concern for the neighborhood’s safety when she saw the sculpture for the first time.

The internet response to these comments was swift and sometimes vitriolic. While the responses largely supported St. Alban’s and “Homeless Jesus,” the intensity of the backlash left many community members feeling as though the responders, like the original commenters, missed the artwork’s message.

“I hate to see that we’re getting a lot of the attention we are because it has given people a chance to take shots at the woman interviewed on television and the man who wrote the letter to the editor,” McIntyre said. “Jesus tells us to love our enemies. In this day and age, our ‘enemies’ are normally those who think differently. It raises the question of how we reach out to them without seeming patronizing.”

Tough conversations, no easy answers
That question of how to engage in conversations about housing issues is an important one to a growing number of community members.

According to St. Alban’s deacon, the Rev. Rebecca Yarbrough, camps of homeless individuals are visible from the off ramps along Interstate Highway 77 throughout the northern Charlotte suburbs. The nearby Mooresville Soup Kitchen, at which members of St. Alban’s volunteer, serves up to 200 people per day in an area that locals consider to be reasonably affluent.

Though the anecdotal evidence abounds, concrete information regarding the scope of homelessness and housing insecurity outside of the Charlotte metro area is difficult to locate. That is something Yarbrough hopes to change through a newly forming coalition of community organizations.

At St. Alban’s February 2013 outreach retreat, members of the church identified homelessness and housing insecurity as two primary areas on which to focus in the coming year. At the time, the parish supported the work of Room in the Inn, a program of the Urban Ministry Center in Charlotte that transports individuals in need of shelter from the metro area to churches and colleges located up to 30 miles away. There they receive a warm, safe place to sleep and a few hot meals before returning to Charlotte the next day.

Some members of St. Alban’s, however, felt the call to address the shelter needs of those in their own community. The conversation around homelessness and housing insecurity continued throughout the next year, but the lack of specific information about community needs slowed progress.

“The Holy Spirit moved,” Yarbrough explained. “The sculpture’s presence has started to accelerate the conversation.”

Partly inspired by the sculpture, local community groups working with homelessness and housing insecurity will gather for the first time in the coming weeks to begin defining the scope of local needs before developing a plan to meet those needs.

Housing questions extend beyond homelessness
While the coalition begins to form around the area’s most difficult housing challenges, the Town of Davidson also struggles to address growing concerns over shrinking socioeconomic diversity.

According to Marcia Webster, executive director of the Davidson Housing Coalition, finding housing in town is a challenge for many professionals working in Davidson. With a current median asking price of just over $400,000, homes in Davidson are out of reach for many who work there, including many teachers, local government employees and members of Davidson’s service industry.

“These are people who deserve to live in a safe, clean and affordable home,” Webster said. “Many people who grew up in the area and have family in the area cannot afford to live in the town where they’ve lived their whole lives.”

To address the issue of narrowing socioeconomic diversity, in 2001 the Davidson Town Board passed an ordinance requiring 12.5 percent of all new home construction to be affordable housing units. This includes three of the Davidson Housing Coalition’s affordable housing townhomes located in the St. Alban’s Square neighborhood, within sight of the “Homeless Jesus” sculpture.

The clergy and parishioners of St. Alban’s hope the sculpture continues to provoke reactions and start conversations that lead to a broader recognition of Davidson’s socioeconomic diversity and increased community support for homeless ministries.

“Our church has always believed that art is intrinsically related to spirituality, and we have always been committed to social justice work,” the Rev. David Buck, rector of St. Alban’s, said. “This combines the two, and it’s incredible. It reminds us that our work among the poor and the marginalized is what gives our faith authenticity.”

— Summerlee Walter is the communications coordinator for the Episcopal Diocese of North Carolina.