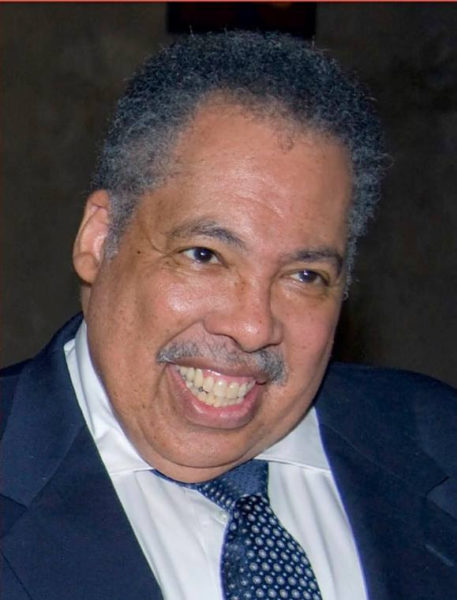 Bertram Albert Medley, Jr., age 69, passed away peacefully at Calvary Hospital in N.Y. Tuesday night (March 11) after a long and courageous battle with cancer. Born on July 21, 1944 in Philadelphia to a family of devout Seventh-day Adventists, he attended an integrated public high school where he discovered two traits in himself that would shape his life both personally and professionally.

Firstly, he learned that he was able instinctively to seek out the human commonalities he shared with others, beyond any racial or religious differences. While this would later inform his journalistic talent for getting to the true “heart” of a news story; more importantly and poignantly, his life-long open minded/big-hearted inclusiveness allowed him to be surrounded in his final months by cherished pastors who were Episcopal priests and Jewish rabbis, by beloved African-American family members and Swedish American “nephews,” and a support team of devoted “framily,” who rivaled any U.N. gathering in their diversity. Skypes from Israel and South Africa were as common to his hospital bed as were the stream of visitors from around the country that brought such comfort to him and amazement to hospital staff. His hospice physician at Calvary, Dr. Carrington commented that “in my entire career, I have rarely seen such an outpouring of love and support for a patient.”

His second discovery at Olney High School, Philadelphia, was the fascination of evolving broadcast technology. This would lead to Bert’s illustrious 33-year career with NBC, first as a network news producer and later as a pioneering visionary who helped lay the groundwork for the digital media age at MSNBC.

Bert caught the broadcast bug after a white, fellow Adventist and classmate invited him to his suburban home to show him the low power radio station he’d set up in his basement. Bert was hooked and the rest was history. From there, he honed his skills working at the college radio station at his alma mater, Temple University. In 1968, he got his first professional television post with NBC News in Atlanta. He later worked in bureaus in Cleveland, Washington, D.C. and Tel Aviv, Israel (where he served as Deputy Bureau Chief from 1985-88), before finally landing at network headquarters in New York City.

His innate compassion and keen story telling skills came to the fore when he teamed up with correspondent Bob Dotson to produce pieces were for a Today Show segment called “…in Pursuit of the American Dream,” which ran from 1975 to 1984. Dotson recalls the story that had the biggest impact on Bert “was the one we did on a Philadelphia beat cop, Bill Sample, who granted wishes to sick kids. In a nutshell the cop’s neighborhood effort paved the way for ‘Make a Wish’ and all the other big time charities that followed.  Bert found the story in his hometown and the piece was nominated for an Emmy.”

Bert Medley was also a futurist. He invested in a computer long before it was a household staple, realizing that this device sitting on top of a desk could engage the “viewer” with words, pictures and sound and that this rich multi-media experience – controlled and guided by the user – could have a much greater impact on presenting news content than the passivity of the television screen.

In 1995 he jumped at the chance to be an integral part of the first teams at NBC News working to bring original news content to the internet. Even before MSNBC.com, there was “NBC Supernet” and it was Bert’s vision that helped lead a small band of digital news pioneers to this new age of journalism.

“Bert was instrumental in bringing his television broadcast colleagues to this new frontier,” said Allison Davis, former NBC News colleague. “Few understood this digital realm but Bert led them by the hand, teaching them to ‘think differently.’”

In 1995 there was no book or script. There was no model to follow.  NBC was the first broadcaster to go online and arguably the first news organization to produce original journalism on the internet.

“We made it up as we went along,” Davis said. “Bert created content and sweet talked his way into using the servers of the parent company, General Electric, that provided the hosting, storage and distribution of our original NBC News content.”

Every Friday, Bert worked late to build an online page that chronicled the week’s news. There was even a news quiz with a T-shirt prize for the user who was first to answer the questions correctly. It wasn’t long before NBC Supernet was absorbed by the partnership between NBC News and Microsoft. Bert was tapped to help direct news coverage at MSNBC.com; his last position at NBC News but certainly not his last job in the digital world.

His work at NBC was recognized with awards from The Associated Press, Women in Communications, the Catholic Academy and the Epilepsy Foundation of America. During his broadcast and cable career he had been active in several professional organizations including NATPE- National Association of Television Program Executives,

In early 2001, he took early retirement from NBC but his communications career was far from over. Having converted to the Episcopal Church years before, he deepened his connection to the Church when he accepted the post of Director of Television and New Media for Trinity Wall Street in lower Manhattan.

“I realized my entire professional experience prepared me for my work at Trinity,” he said from his bed at Calvary Hospital in the Bronx on his last Christmas Eve. “I thought I was guided to Trinity.”

On the morning of Sept. 11, 2001, Bert Medley was at Trinity Television studios, located in a church building just a few blocks from the World Trade Center. He was preparing to videotape a theological program led by the Right Rev. Dr. Rowan Williams, soon to become the Anglican Archbishop of Canterbury. As the attacks unfolded before their eyes the archbishop led a prayer and Bert went into news producer mode.

“The journalist in me just kicked in,” Bert recalled. In fact, one of the freelance videographers Bert hired that day recorded the second plane crashing into the World Trade Center tower.

The experiences of the archbishop as he and the clergy and countless employees at Trinity then scrambled to save their own lives and the lives of the nursery school children at Trinity Day Care, would inform his book of theological reflections on 9/11, Writing in the Dust: After September 11.

Archbishop Rowan never forgot Bert. Few people who ever met him could. Upon learning of his declining health, he sent a personal note to him with Bishop Herbert Donovan, one of Bert’s close friends and pastor.

In the months following 9/11, Mr. Medley’s team at Trinity Television would go on to document the extraordinary 9-month volunteer ministry that was housed at St. Paul’s Chapel, a Trinity-owned church directly across from the Twin Towers. St. Paul’s miraculously survived the collapse of the towers unscathed and became a respite center for first responders. In 2003, it opened one of the first memorial exhibitions in the area.

During his five years at Trinity Wall Street, Bert also worked on video projects bringing together renowned international theologians of many faiths to explore the roots of fundamentalist violence and extend the call for non-violent reactions to conflict. Through these projects he came to work both with Nobel Laureate Archbishop Desmond Tutu of Southern Africa and also his successor, Archbishop Njongonkulu Ndungane, with whom he developed a close personal friendship.

Bert also became a respected lay leader in the Episcopal Diocese of New York, serving on the vestries of both his own parish, St. Bartholomew’s on Park Avenue, and later at Trinity Wall Street. He also served on the Advisory Board of Episcopal Charities. This did not mean that he forgot his love and respect for the church of his birth. He shared his torn loyalties and recalls being much assuaged by the Rev. Dan Matthews, then rector of Trinity, who reminded Bert that the first client for the Trinity Television production studios he helped revamp was the Seventh-day Adventist program, “Faith for Today.”

Bert’s final professional project fulfilled a life-long personal dream.  After leaving Trinity in 2007, he helped a vibrant new start-up channel “K24” in Nairobi, Kenya to develop into a 24-hr. news station. In a rare moment of racial commentary, his friend Alessandra Pena recalls his sharing how unexpectedly overwhelming it was for him to see an entire news station full of young black journalists after an early career being one of a handful of African Americans in any given U.S. newsroom.

“I joked that he was having his ‘Roots’ moment,” says Ms. Pena, “and he let out that deep wonderful belly laugh of his and said, ‘Absolutely, and I got to see the dream come true at least once, somewhere!’ ”

In October of 2007, while in Kenya, Bert was diagnosed with a recurrence of the spinal astrocytoma he had first battled in 1997. He finally succumbed on March 11 shortly after 11 p.m. surrounded by family and friends, the “framily” who had supported him throughout his final journey.

A funeral service will be held in April at St. Bartholomew’s Episcopal Church, Park Avenue and 51st Street.  In lieu of flowers, the family invites donations to be made in the name of Bert Medley to “Episcopal Charities of New York” 1047 Amsterdam Avenue, New York, NY  10025 Attn: Rev. Mary Beth Sasso.