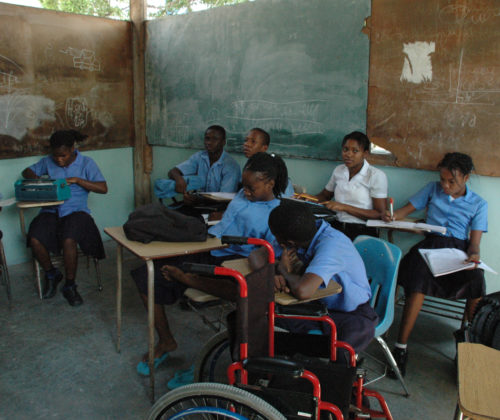 Even prior to the 2010 earthquake, students at the Episcopal Diocese of Haiti’s St. Vincent’s Center for Handicapped Children in Port-au-Prince, Haiti, stretched the space available at the school. Rebuilding plans call for more classrooms. Photo: Mary Frances Schjonberg/Episcopal News Service

[Episcopal News Service] A New York Episcopalian has taken the lead in the effort to rebuild the Episcopal Diocese of Haiti’s St. Vincent’s School for Handicapped Children in Port-au-Prince, which was destroyed by the 2010 earthquake.

Mary White’s gift was celebrated March 10 during a reception at the presiding bishop’s residence in the Episcopal Church Center in New York.

The specific amount of the donation was not announced at the reception but Presiding Bishop Katharine Jefferts Schori thanked White for her “willingness and generosity in offering a lead gift for the reconstruction of St. Vincent’s new facilities.”

“It is a remarkable statement – a remarkable witness – to what is possible,” she said, also thanking White “for challenging us and helping all of us to be more generous and to help heal the world.”

White is a member of St. James Episcopal Church in Manhattan and a physician.

She said during the gathering that she feels “quite confident that the Episcopal Church, arm in arm with the Haitian church, can rebuild Haiti in a way that will be supporting social, cultural, educational and medical efforts throughout the country; not just in Port-au-Prince, not just with St. Vincent’s Center for Handicapped Children.”

White said she was inspired to make her donation by all she has heard from Episcopal Church leaders about “what progress has been made [in Haiti], what progress can be made and the conscientiousness with which it is being done.”

Her gift, she said specifically to St. Vincent’s Director Pere Sadoni Leon and Haiti Bishop Jean Zaché Duracin, is meant to show that the church has “great confidence” in the work they are doing.

“The earthquake of 2010 destroyed not only St. Vincent’s facilities, but also St. Vincent’s children’s hope in a better future,” Sadoni told the gathering.

Knowing that St. Vincent’s will be rebuilt is not only great news for its children “but also for the handicapped sector in Haiti,” he said.

What Leon called “this fabulous donation” will rebuild the destroyed infrastructure of the center and will help to improve and extend its program to serve more people than before the quake, he said.

“If you could see my heart and the hearts of the children, you would understand at which level we consider this donation.” 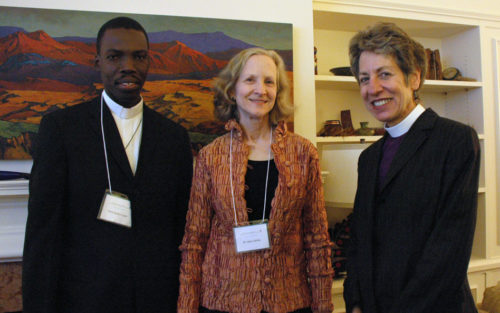 Jefferts Schori, noting that both Leon and White mentioned hope in their remarks, said the hope that St. Vincent’s represents to Haiti, as well as to the Episcopal Church and the world, is about “the reality that there’s a place for all God’s children in the world.”

White’s donation and the work of St. Vincent’s “gives children who would be discarded in other places a real role in the rebuilding of the nation. They are not only the recipients of care, they become participants and the partners in helping to heal the nation,” the presiding bishop said. “That is a remarkable thing to make possible.”

She urged those at the reception, all of whom support mission and ministry in Haiti, to “keep telling the story of possibility, the story of healing that flows out from generous hearts across the world.”

White’s journey to her donation decision
White said in an ENS interview prior to the reception that her decision to take the lead on the St. Vincent’s rebuilding was the unexpected outcome of an exploration she began close to 14 years ago when her parish mounted a capital campaign that raised approximately $50,000 specifically for mission projects. She first became aware of the needs in Haiti when she traveled there as chair of a parish committee to choose those projects.

While the majority of that mission outreach money went other projects, some parish members did take mission trips to Haiti and White continued to work in the country, including being involved with a birth center called Maison de Naissance near Les Cayes. She first met St. Vincent’s Director Leon when he was rector of the Episcopal congregation in Torbeck near Maison de Naissance. From people connected with Children’s Medical Mission to Haiti and others, White said she’d heard about St. Vincent’s for many years.

White, a doctor of internal medicine who specialized in infectious disease, also went to Haiti two months after the 2010 earthquake and worked in a field hospital near the border with the Dominican Republic on the grounds of an orphanage.

The 2010 quake destroyed St. Vincent’s as well as the Holy Trinity primary, secondary, music and trade schools, the Convent of the Sisters of Saint Margaret and Holy Trinity Cathedral (all part of the cathedral complex), and the Episcopal University of Haiti, College Saint Pierre (a secondary school) and the diocese’s income-producing rental properties. 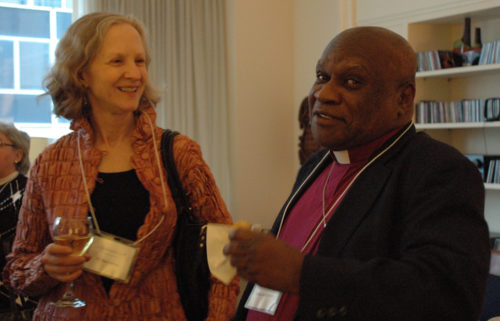 At St. Vincent’s “the needs there are more in sync with who I am. These are children, many of whom have been abandoned by their parents. I’m an adoptive mom; I’m a physician and it’s a place where a lot of medical care is given.”

White said she also thought St. Vincent’s would be a “great place for St. James parishioners to be able to contribute” in terms of their time and talent as well as treasure, sharing their skills with students and faculty, and perhaps others in the community. Noting that she didn’t want to “force it on” St. James’ members, White said “it just seemed like getting that facility built would allow for a lot more people to help.”

‘God meant this to be’
So she invited Elizabeth Lowell, director of the Episcopal Church’s Development Office, to speak to St. James’ Partners in Mission group about volunteering in Haiti in the face of the U.S. State Department’s seemingly standing warning about travel in Haiti.

As Lowell spoke, White said she began to see more and more ways in which having new facilities at St. Vincent’s could result in more people connecting with the school’s ministries.

“Then we left that meeting and I said to her: ‘I want to rebuild St. Vincent’s,’” White recalled.

Her gift is by far the largest donation White has ever made. “For me as an individual I have never done anything like this; not even close,” she said.

White says her decision to donate to St. Vincent’s was an emotion-filled epiphany.

“When I told Elizabeth as we walked out of St. James, I started to cry,” White said. “It felt like a relief” because she now knew how she wanted to spend some of the money she had received in a divorce settlement.

“I felt euphoric afterwards,” she said. “I did feel afterwards that God meant this to be.”

St. Vincent’s past and future
When it was founded in 1945, St. Vincent’s was the first school for disabled children in Haiti and is still the only place teaching braille to the blind in the country. About half of its current 250 students are blind; the others have multiple physical disabilities. They are taught in 12 classrooms and more such space is part of the rebuilding plan.

The school is a long-standing part of what Bishop Duracin calls a “gospel of wholeness” that the Episcopal Church of Haiti, known locally as L’Eglise Episcopale d’Haiti, has preached and practiced since its founding in 1861. It is a gospel, Duracin has said, which “can serve people in their body, their mind and their spirit.”

The plan to rebuild St. Vincent’s calls for an increased enrollment of 525 students (165 of them residential). New dormitory space is needed to accommodate that latter group.

There also are plans for a medical clinic with orthopedic and pediatric care as well as eye, ear, and surgical care. The clinic will serve the surrounding community beyond the school.

A planned guest house at the center will provide a place for people on mission trips to stay on the grounds, and it will provide some income for operations. Roof-top gardens are planned where students and faculty can raise food to supplement the students’ two daily meals while providing them with skills. It is expected that the gardens might also produce enough food that could be sold for income.

The school has already installed a water-purification system that eliminates the need to buy bottled water and could eventually become another source of income.

The school’s prosthetics workshop has been rebuilt, with the help of Catholic Medical Missions Board, Physicians for Peace and Hanger Orthopedic Group. Some of the older deaf children are learning a trade there. St. Vincent’s also is home to Haiti’s only hand bell choir – all of whose members are blind.

In Léogâne, the diocese’s Faculté des Sciences Infirmières, its nursing school, was undamaged by the 2010 temblor and plans to expand its programs and make a connection with St. Vincent’s. An Episcopal University-approved four-year occupational and physical therapy training program will be located near the nursing school. Those students will intern at St. Vincent’s. 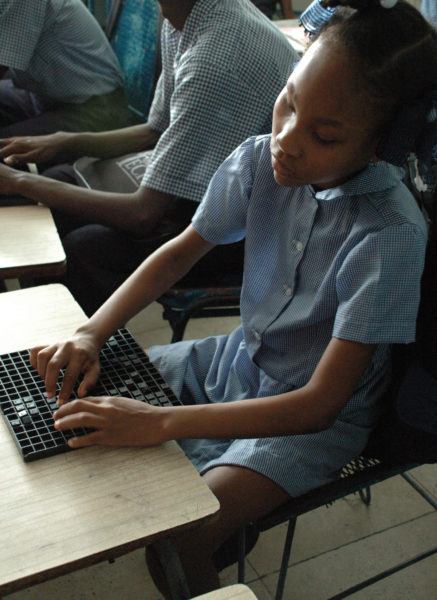 A student at the Episcopal Diocese of Haiti’s St. Vincent’s Center for Handicapped Children in Port-au-Prince, Haiti, studies braille in November 2008. The center is still the only place teaching braille to the blind in the country. Photo: Mary Frances Schjonberg/Episcopal News Service

With the pledge to rebuild St. Vincent’s, White sees the chance to deepen the connection between the Episcopal Church and the school, and the country as a whole. She said she hopes she will be able to volunteer routinely at the school.

Making deep connections with people in need is important to White. She serves on the advisory board of the Boston-based Institute for Justice and Democracy in Haiti, which advocates for legal rights for Haitians and has lately been involved in a lawsuit against the United Nations to compensate victims of a widespread cholera epidemic in the country.

White also has spent the last eight years volunteering for the human rights project of the Icahn School of Medicine at Mt. Sinai Hospital in Manhattan where she conducts physical exams for people seeking asylum in the United States.

White’s donation is not the end of fundraising for St. Vincent’s. “All of the needs for St. Vincent’s are not being satisfied by this gift,” she said. “There are many more opportunities for people to give from a big to a small level.”

To that end the church’s development office aims to raise an additional $5 million for the school with $1 million each targeted for medical equipment and dormitory and classroom furnishings, and $3 million for an endowment to provide some operating income.

White wants Episcopalians and others to remember that all of the church’s work in Haiti needs their support.

“For the Episcopal Church’s mission as a whole, Haiti is not done. There is still the cathedral, there are still several other entities that need to be rebuilt,” she said.

Lastly, she said, “I want to encourage people to change their thinking about Haiti; to feel confident about Haiti’s future.”

“Buildings are being built to the highest standard of earthquake- and hurricane-resistant architectural standards; it’s being done deliberately and carefully, and in many ways environmentally soundly and I hope that this gift will not just lead to other gifts big and small but to a greater sense of confidence in Haiti’s future.”

“Everybody just thinks that Haiti is doomed and that it’s never going to climb out of its hole. I hope that this [donation] is one of those things that’s going to show that people have confidence in Haiti and its future … Haiti is not hopeless.”