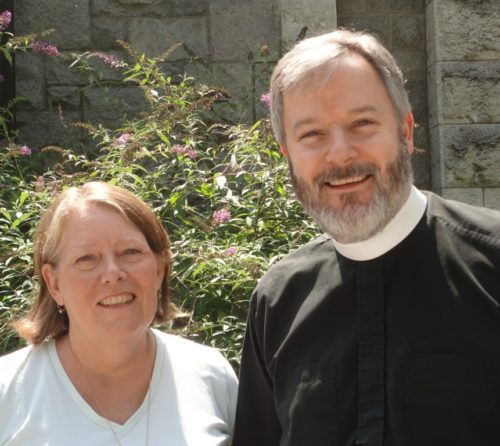 [Episcopal Diocese of Connecticut] The Rev. Greg Welin is home and resting comfortably these days. Admittedly this wouldn’t be newsworthy except for the fact that he donated a kidney last month.

A fatal genetic disorder
Here’s the backstory: In 2010, Greg was serving as the priest-in-charge of St. John’s in New Milford. There, he met and worked with Kim Polhemus who was serving as senior warden at that time. While outwardly healthy, internally Kim was battling a genetic disease known as Polycystic Kidney Disease, or PKD. The disease is eventually fatal without dialysis or a kidney transplant. Kim has shared that PKD is rampant in her family. Other family members, including her father, have died from it — sometimes after languishing on dialysis for a few years before succumbing.

Kim had PKD, as did one of her sisters, Kathy. A third sister, Michelle, did not inherit it.

Back in 2010, tests coming back from the doctors at Yale-New Haven Hospital showed the kidney function in both women was diminishing to the point that the sisters would either need a transplant, or dialysis, within a year. After watching what had happened to their father, Kim said that finding donors for both herself and Kathy was paramount. Sister Michelle volunteered to be a donor; she was tested and found to be a good match for either sister. The hospital wanted Michelle to declare which sister she would donate to, but with both in need of a kidney, Michelle refused to commit to either until a second donor was found.

Swallowing her pride, Kim wrote a letter that summer and sent it by e-mail to everyone in her contact list, hoping and praying it would help them find a second donor. Someone forwarded it to the local newspaper and a reporter interviewed her, generating more attention and broadcasting the need to an even wider audience. According to the National Kidney Foundation, 3,381 people died in the U.S. last year, waiting for a kidney donor.

Just before Thanksgiving, as Kim was on the way back from a long weekend away, her sister Kathy called her with the name of a possible donor who had quietly stepped forward and been tested.

He’d heard about it after he returned from his summer vacation, put his name on the list, and was called in that fall for tests. Greg had had a thorough medical workup to check whether he was a match and to make sure he was healthy enough for surgery, and the answer to both was “yes.” Kim had Kathy repeat the name twice before she realized who it was. Both were overwhelmed with gratitude.

“When I received the call from the hospital I started crying with joy and kept saying ‘thank you’ over and over,” Kathy said. “I asked them to tell Greg thank you so much.” It brought tears to Kim as well. “I cried in the car. I never saw his name on the list, he never told me,” she said.

While Greg’s decision to offer his kidney was certainly a gift and blessing to Kim’s family, it was also a blessing to Greg for a different reason. Years ago his sister had died and he hadn’t been able to do anything to help: this time, it would be different. He could help.

Back at St. John’s, Greg had a practice of inviting people to stand up, after the congregation exchanges the peace during the Sunday service, and share something for which they’d like to give thanks. Kim and Greg stood up together and shared all the news with the congregation.

The surgeries begin
With a second donor now in place, doctors determined that Michelle’s kidney was a better match for Kim, so Greg would be donating a kidney to Kathy.

The next summer, as Kim’s kidney continued to fail, she had what the doctors at Yale-New Haven hospital called a “textbook transplant.” There was no infection or rejection, and Michelle was up and active again in a week.

Unexpectedly, Kathy’s kidney function stabilized for a while. Greg, Kim, and Kathy stayed in touch by e-mail occasionally, as they waited. It wasn’t until the fall of 2013 that the doctors decided that it was time. Greg, who by then was the priest-in-charge of St. Paul’s, Woodbury, said that the end of the Epiphany season would be the best time for him. They all agreed on an early February date.

Because the original testing had been in 2010, Greg was thoroughly re-tested, passing them all.

Both donor, and recipient, along with Kim, Michelle, Kathy’s husband George, and Greg’s wife Amy, arrived about 6:30 a.m. at Yale-New Haven hospital on Feb. 6.

Greg was quickly admitted and got to say “hi” to Kathy as she waited.

Kathy needed some additional tests when she arrived so her surgery was delayed three hours. Surgery itself was three to four hours for each. Afterwards, each went to post-op care in Yale-New Haven’s Transplantation Center.

Greg stayed for two days, going home Feb. 8. While he was in the hospital he saw Kathy a few times, to say hello. Kathy’s recovery was longer as her body has to accept the donated kidney.

Kathy stayed until Feb. 11. Kim said that Kathy was home for a week but then was readmitted with a lot of pain. After two days she was released home again. “My sister is now on her way to a normal life with her new healthy kidney,” said Kim.

Greg’s recovery was more straightforward. “I moved around a bit gingerly at first,” he said, “and had some trouble bending to get in and out of chairs and the bed.” But other than the tiredness and modest post-surgery pain, he said that he didn’t feel any differently.

“I was relieved,” he said. “There were lots of unknowns: What would I feel like? What was the surgical process? How incapacitated would I be? I was relieved that it wasn’t as difficult as I was concerned it might have been. I always felt I was in good hands, though, and very supported. I didn’t feel alone.”

Concerns about how the parish would do in his absence were relieved, also, as people were eager to help out. “They’ve been supporting me in a positive way,” he said.

Amy, Greg’s wife, who is also the priest-in-charge of St. John’s in Waterbury, said she’s also relieved the surgery went so well and is now behind them. She supported his decision, yet it’s still major surgery so normal fears rose up along with those that she carried from having been widowed earlier in her life. “I’m very proud of Greg for being compassionate and generous,” she said. “And I knew the surgeon was good, but I was terrified. The night before the surgery I had to get out of bed for a while and have a cry.”

God must have been listening. An Episcopal chaplain walked in on them when Greg was in pre-op – actually, it was a priest whom Amy had mentored – and offered prayers. Then next day when Greg was in post-op, two other chaplains, both Episcopal clergy whom she knew, stopped by.

Greg continues to do well, in all ways. “I’m really happy I was able to do this,” he said. “In the back of my mind I was thinking of my sister, who died. I couldn’t do anything at that time. When the opportunity came up here, I thought I could help a fellow sister on the planet. It’s a great privilege to be able to help in this very tangible way.”

“And,” he said, “how often do we get a chance to do something like this?”

Kim also reflects on the journey. “It’s been a big circle,” she said. “It changes you on so many levels. First, my own survival, then my sister’s. I have an overwhelming sense of gratitude through all this, for his humbleness and generosity and life-giving spirit.

“It’s hard to know how to thank someone sufficiently for saving your sister’s life.”