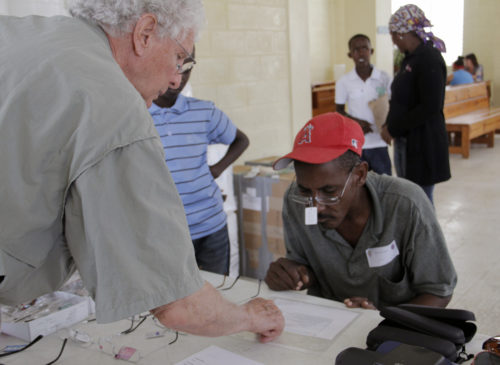 The mission, now in its 16th year, runs like clockwork in the former sugarcane community located not far from the popular tourist beach in Boca Chica.

Patients arrive with problems including high blood pressure, respiratory trouble, gastrointestinal difficulties, skin rashes, diabetes. A visit can take between three and four hours, depending on the number of patients awaiting treatment; the team typically sees between 1,000 and 1,500 patients during the five-day clinic.

Upon entering the clinic, a patient visits a registration table, where forms are issued. Intake follows, where weight and blood pressure are measured. Then Rita Bush, a dietician and diabetes educator from Malta, New York, pricks the fingers of those wishing to have their blood sugar tested. Many patients have high blood pressure and diabetes, and many go without medication.

If a person has fasted, normal blood sugar, or glucose, levels range between 70 and 100 milligrams per deciliter. If a person has eaten, you might see 130 milligrams. Anything over 160 indicates diabetes. On the morning on March 3, two patients had blood sugar levels of 500 milligrams, one of them an insulin-dependent child, said Bush. 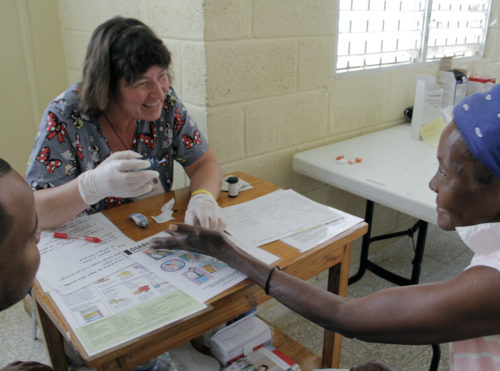 Rita Bush, a dietician and diabetes counselor, tests a patient’s blood sugar during the first day of the medical clinic at Santo Tomas in Gautier. Photo: Lynette Wilson/Episcopal News Service

After these preliminary checks, the patient waits to see a doctor or physician assistant before visiting the pharmacy. The final stop is a prayer station to receive, not only prayers, but also a care package with soap, toothpaste and other practical personal-hygiene items.

“For some of these people, it’s the only time [during the year] they see a doctor,” said Kevin Bolan, a physician assistant from Newcomb, New York. As the week progresses, he added, people arrive at the clinic from further and further away.

The upstate New York team’s journey began around 2:30 a.m. on Feb. 28 when the members boarded a bus bound for John F. Kennedy International Airport at St. Eustace Episcopal Church in Lake Placid. Besides their personal luggage, they brought 40 large plastic bins filled with supplies and medication.

Just as the New York group arrived in the Dominican Republic, another medical mission team from North Carolina was traveling back to Santo Domingo from Jimaní, a border town where it had spent the week operating a clinic out of San Pablo Apostol, another Episcopal Church.

It was the first time Giga Smith, a registered nurse and member of Christ Church in New Bern, North Carolina, joined a medical mission team.

“I’ve always wanted to do this,” she said. “At first it felt very emotional, but then I got into the mindset that I was going to do all I could.” 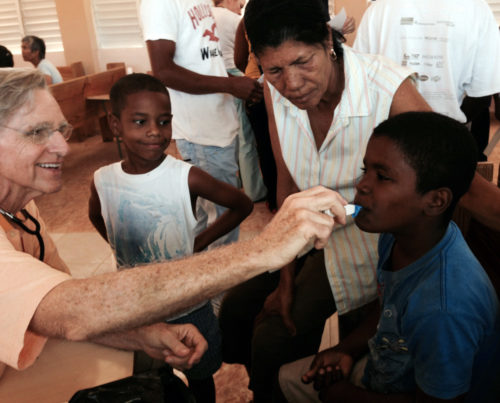 Dr. Richard Taft of St. Paul’s Episcopal Church in Greenville, North Carolina, treats a young patient during a medical clinic at San Pablo Apostol in Jimaní. A medical team from North Carolina ran a clinic out of the church Feb. 24-27.

Jimaní, population 13,000, is one of two main border crossings between the Dominican Republic and its neighbor to the west, Haiti. In four days, the team treated 716 people, ranging in age from 22 months to 90 years. A local Haitian doctor was on hand throughout the clinic and will provide follow-up care for the patients.

“In giving of their time, the teams are showing an example of God’s love to all humanity,” said Karen Carroll, an Episcopal Church-appointed missionary serving the Diocese of the Dominican Republic.

To administer medical care in the Dominican Republic, professionals must provide valid credentials and a list of all medications, including expiration dates, lot numbers and intended uses, to Carroll, who files the appropriate paperwork with the public heath ministry.

In total, 14 U.S.-based medical mission teams will travel to the Dominican Republic in 2014, up from nine teams in 2013, said Carroll.

It’s as much about being a Christian mission and accompanying the Dominican church as it is about providing medical care, say team members.

“First and foremost, we are a Christian mission,” said Connie Reynolds, a licensed practical nurse and a Baptist member of the upstate New York team. “And then a medical mission.” 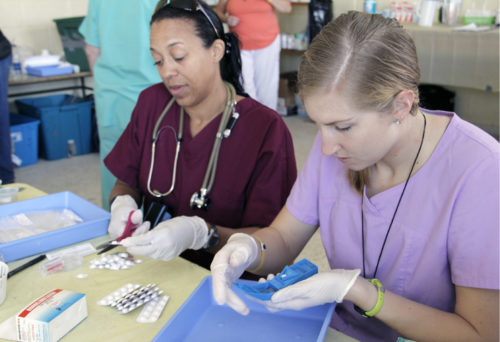 Still the doctors, nurses, dieticians and physical therapists provide medical care to many poor and impoverished people who otherwise might fall through the cracks of the country’s public-health system.

In 2001, the Dominican Republic approved health-care reforms aimed at providing universal coverage to its citizens. The implementation, however, has been lacking, with rural areas lagging behind urban areas, and fee-based medical care surpassing the care offered through the public system, according to the World Health Organization.

International medical missions are sometimes described as “Band-aides,” with criticisms including foreign practitioners’ disrespect for local health-care providers; missioners’ lack of appropriate cultural practices; teams’ inadequate language skills and interpretation for treating patients in a foreign language; and the high travel costs when funds potentially could be spent in more appropriate ways.

Well aware of the criticism, the teams making annual visits to the Dominican Republic say that saving just one life and seeing the overall improvement in health and hygiene in the community from year to year justifies their worth.

For instance, a young man came to the clinic in Jimaní on the verge of a diabetic crisis, said Dr. Richard Taft, a retired OBGNY from St. Paul’s Episcopal Church in Greenville, North Carolina. After receiving insulin, the young man quickly recovered. Another man whose eyelids were swollen shut began an immediate recovery when treated with antibiotics, added Taft. 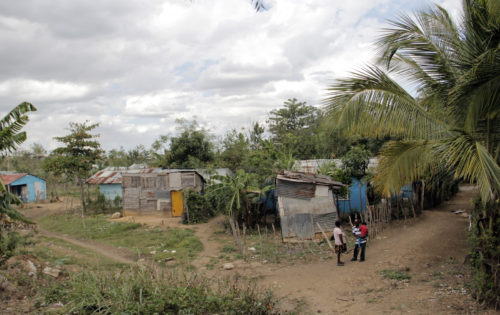 There used to be a large sugar cane plantation in Gautier and many Haitian migrants lived nearby in bateyes like this one. Photo: Lynette Wilson/Episcopal News Service

Gautier has one medical clinic staffed by a doctor; the nearest hospital is 15-20 minutes away by car. Jimaní has a rudimentary hospital that was built in 1948 and is staffed by six general practitioners, two OBGYNs and one general surgeon, according to North Carolina team members who toured the facility.

In many ways, said Dr. Allen Van Dyke, an OBGYN from Ashville, North Carolina, “the medical care is relative to the living conditions.”

Witnessing the amount of suffering on the border stirred emotions and thoughts about the U.S.-health care system in team members from North Carolina. 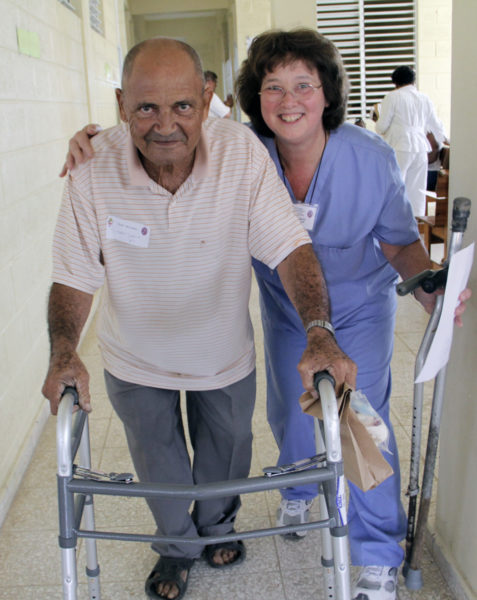 Anne Bena, a physical therapist, fits a patient with a walker. Before receiving the walker, the patient, who Bena has known for four years, used two crutches to get around. Photo: Lynette Wilson/Episcopal News Service

“I don’t know what you do with the disparity,” said Susan Bickery-Mercer, who’d read “Mountains Beyond Mountains,” Tracy Kidder’s biography of Dr. Paul Farmer and his experience providing medical care to people in Haiti, before making the trip.

One of the most powerful things Bickery-Mercer, youth minister at St. Paul’s in Greenville, witnessed as part of the team was the ease with which the local people share their lives.

When people are clearly suffering and in need, the connection tends to be at the heart level, she said. It was something Taft sensed as well, and added, that for Christians, ritual Sunday worship can sometimes become a blinder to the Spirit.

“To see the rawness of life is a very powerful thing,” said Taft. “Getting out of your comfort zone allows you to step back and reflect. That’s the essence of mission.

“We just happen to do it with medicine.”

Back in Gautier, community residents must travel either to Boca Chica or Santo Domingo to visit a hospital, said Ermita Reyes, a community and church leader, and even though the hospital in Boca Chica is just a short distance away, it can cost a life.

“Their [the team’s] presence is an example of the grace of God in the community,” she said. 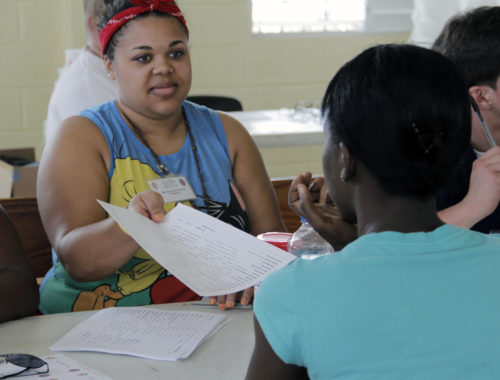 The New York team’s medical clinic is the only full medical clinic to visit the community annually, said Connie Reynolds, the LPN, who brings her daughter, Savannah Gordon, along to help out.

It was the fifth time Gordon, a college student, took part in the medical mission.

“After the first year, I came back a different person,” she said. “It’s humbling to see how people live and be part of the community and develop friendships.

“It’s heartbreaking to come back and learn that someone has died.”

Kevin Bolan’s daughter also accompanies him. Laura Bolan recently graduated with a master’s degree in public health and plans to follow her father’s example and become a physician assistant. To her, the need for more frequent clinics and follow-up trips, as well as efforts toward disease mitigation, are obvious.

“It would be great if we could partner with another group and come down every six months,” she said. 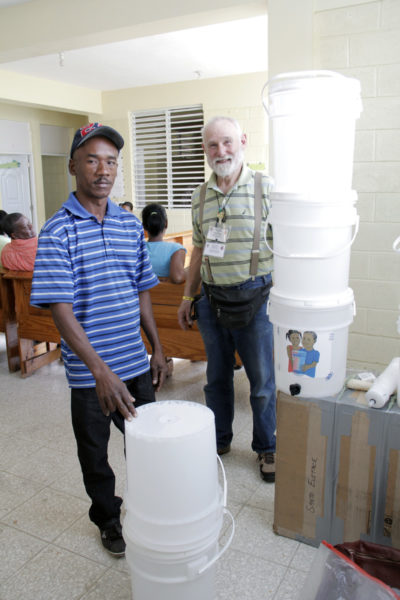 The care packages, providing soap and toothpaste, and the clean-water bucket-filtration system that Paul Gutmann provides are important because many of the problems people present with come from drinking parasite-infected water and poor personal hygiene, said Laura Bolan.

Gutmann works with a local contact to distribute the filtration systems. Each unit costs about $33, but Gutmann raises money and contributes his own money to make them affordable. He may not have high success rates now, but he hopes the next generation, one that has grown up knowing the risks of drinking contaminated water, will begin to filter its own water, he said.

With 40 bins of supplies and medication, each weighing between 40 and 50 pounds, the New York medical team brings enough medication to leave behind to be distributed by a nurse working locally. Patients leave the clinic with three months’ worth and can return for follow-up tests and more medication, as needed.

“The challenge is leaving them with enough medication,” said Kevin Bolan, who already had been thinking about organizing a skeleton crew to return and run a clinic over Labor Day weekend. “It’s a work in progress; we have to figure out what works.”