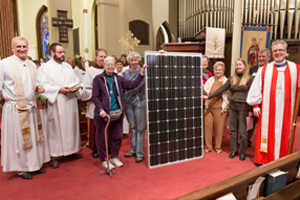 [Episcopal Diocese of Texas] A pilot project that is being watched closely by utility companies around the country now has all 576 panels in place in downtown Austin. Today, the last few panels were mounted on the roof of St. David’s Episcopal Church’s nine-story garage. The system is sized to produce 200 MWh per year, which will provide electricity for a day school, coffee shop, homeless resource center, and off-site classes for AISD.

The idea for the project, which is the first of its size in downtown Austin, was first discussed by church leaders 10 years ago. “We had a window of opportunity that opened with a newly created pilot program by Austin Energy, federal rebates, low interest rates, and the advancement of technology. Everything came together so well with the help of Austin Energy and Meridian Solar, we were finally able to carry it out,” said St. David’s Parish Administrator Terry Nathan.

In the past, a project of this size was too risky. Downtown networks have been set up to only allow electricity to flow in, creating better protection for densely populated areas. An initial concern of the project was that on the days when more solar energy was generated than needed, the excess would try and pump back into the grid causing significant problems. With this project in mind, Meridian Solar helped create a sophisticated control system that permits the solar array to be connected to the utility’s electrical service, all while prohibiting the excess generation from back feeding into the downtown network. 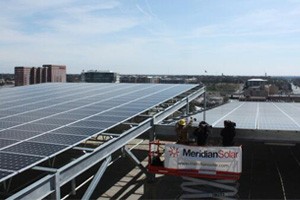 “This achievement is the latest chapter in St. Davids’ long history of contributions of the Austin community,” said Austin City Council Member Chris Riley. “By helping resolve difficult issues related to our electric grid, St. David’s has moved us closer to our goals for local solar generation, and has demonstrated once again the value of its longtime partnership with the City.”

Beyond the obvious benefit of saving on energy costs (St. David’s also houses a day school, coffee shop, homeless resource center, and off-site classes for AISD), the solar panel project reflects St. David’s values on protecting the environment and conserving resources. St. David’s is a certified GreenFaith Sanctuary, houses and maintains a certified Wildlife Habitat in the middle of downtown, is a City of Austin Green Business Partner (Platinum level); and winner of the 2012 Keep Austin Beautiful Award in the category of Recycling and Waste Reduction.

St. David’s Rector, the Rev. David Boyd, shares his excitement about the project, “Through our solar energy project, we are fulfilling God’s call to be stewards of creation. In addition, as we save significant money on our utility costs, those resources enable us to fulfill other aspects of the Gospel as we care for those in the Austin community, including our homeless brothers and sisters and local service agencies.”

About St. David’s Episcopal Church:  St. David’s, established in 1848, has approximately 2,400 members and offers seven services each Sunday and prayer services during the week. The church, which occupies an entire city block in downtown Austin, supports the Austin community by serving homeless neighbors, providing grants to local non-profits, and organizing volunteers to support local projects like Habitat for Humanity and Wildfire Relief efforts. Learn more at www.stdave.org

About Meridian Solar: Meridian Solar specializes in the development, engineering, construction, and financing of high quality solar electric projects. Blue-chip commercial clients, State and Federal entities, non-profit organizations, and utility providers repeatedly count on Meridian Solar when considering renewable energy for their facilities. With more than a decade of experience, comprised of hundreds of installationstotaling 39 MW of generating capacity, MeridianSolar is truly a seasoned veteran in the burgeoning solar industry. Learn more at www.meridiansolar.com.