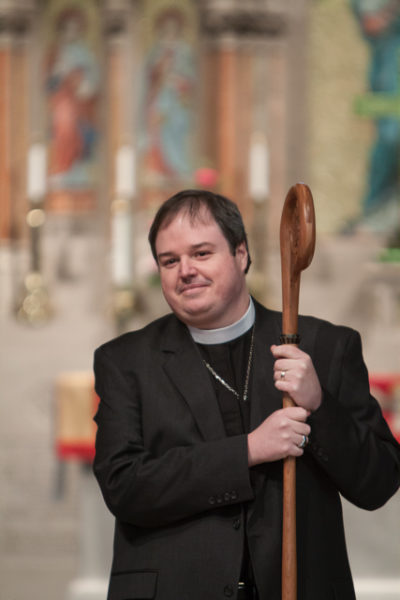 [Canticle Communications] A special convention of the Episcopal Diocese of Bethlehem on March 1 elected the Rt. Rev. Sean Rowe as the provisional bishop of Bethlehem.

The diocese comprises 14 counties in northeastern Pennsylvania and includes the cities of Allentown, Bethlehem, Easton, Hazleton, Reading, Scranton and Wilkes-Barre.

“It’s a great day in the kingdom,” said Rowe after his election. “I am humbled and count it a privilege to stand before you today as your bishop. I am excited about this opportunity to serve you.”

Rowe has been bishop of the Episcopal Diocese of Northwestern Pennsylvania for seven years, and will continue in that role. His position in the diocese of Bethlehem will continue for three years.

“My style is a collaborative one in which we will work together — bishop, clergy and lay leaders,” said Rowe in an address to the convention following his election. “I hope you will find yourself welcome to a table large enough to hear your voice. Collaboration requires relationships of substance, and I want to spent time getting to know you, hear your stories, and learn to care about those ministries for which you have great passion and excitement.”

All of 64 of the clergy present and 99 of the 100 laypeople voted in favor of Rowe’s election, which required a two-thirds vote.

“The Standing Committee chose Bishop Sean as our nominee for provisional bishop because of his stable, forward-thinking leadership in Northwestern Pennsylvania,” said the Rev. Canon Andrew T. Gerns, president of the Standing Committee in Bethlehem and rector of Trinity Episcopal Church in Easton. “He has a strong track record of building relationships with clergy and lay leaders and proven skill at resolving conflict directly and effectively. We’re delighted at his election and grateful that the Standing Committee of the Episcopal Diocese of Northwestern Pennsylvania has so readily agreed to undertake this innovative arrangement with us.”

“Today you did not elect the smartest or the most spiritual bishop ever. The fact is, there are people here who have been praying twice as long as I’ve been alive,” said Rowe, who is 39. “What you’ll get is one who is faithful to God, at least most of the time, and one who stands firmly on the promises of Jesus Christ. I am your servant.”

The Diocese of Bethlehem’s previous bishop, the Rt. Rev. Paul V. Marshall, retired on Dec. 31 after a terminal sabbatical. On Jan. 1, the Standing Committee announced its plan to call a provisional bishop for a three-year term.

Rowe will take up his new duties immediately and by August 2014 spend half of his time in each diocese. He, his wife, Carly, and their one-year-old daughter, Lauren, will have a home in both suburban Erie and in Bethlehem.

Rowe was ordained bishop of Northwestern Pennsylvania, which comprises 33 congregations in 13 counties, in 2007. He is known for developing transformational leadership and is a Ph.D. candidate in organizational learning and leadership at Gannon University. He is a 2000 graduate of Virginia Theological Seminary and a 1997 graduate of Grove City College. He serves as parliamentarian for the House of Bishops, chair of the Episcopal Church Building Fund, and member of the General Board of Examining Chaplains, the Task Force for Reimagining the Episcopal Church, and the Council of Advice to the President of the House of Deputies.