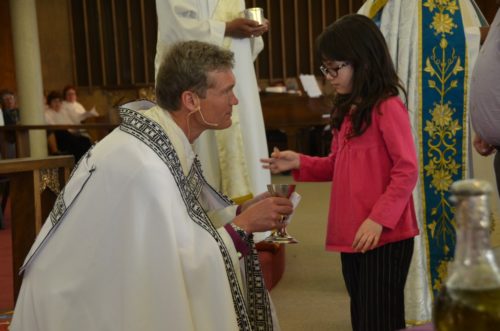 Bishop David Rice administers the Holy Eucharist to one of the younger members of the Diocese of San Joaquin. Photo: Richard Schori

Surrounded by an overflow crowd at the festive afternoon service at St. Paul’s Church in Modesto, the presiding bishop administered the oath of conformity to the doctrine, discipline and worship of the Episcopal Church to Rice, who most recently served as Bishop of Waiapu in the Anglican Church in Aotearoa, New Zealand and Polynesia.

Rice is poised to become the next bishop provisional of the diocese; he will stand for election at an upcoming March 29 special convention to be held at 11 a.m. at St. Paul’s Church in Bakersfield. 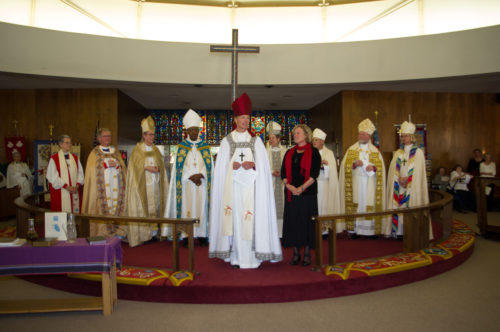 Bishop David Rice and his wife Tracy are joined in front of the altar by some of the bishops from the Episcopal Church’s Province VIII dioceses. Photo: Kelvin Yee

“Bishop Lamb was stalwart and creative in encouraging this diocese to discover the reality that … all the baptized are gifted for ministry, those gifts and skills differ from one person to the next, and all of them are essential to the work of the body of Christ,” she said of that chapter in the diocese’s life. “Perhaps the central watchword of this chapter was ‘grow up … into the full stature of Christ.’” 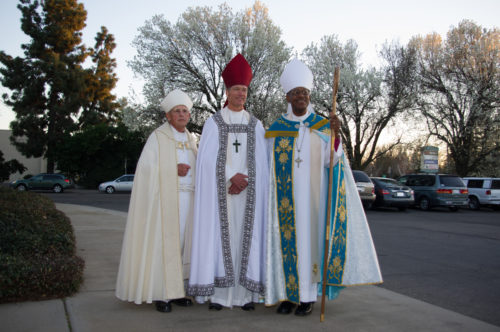 She added that Jane Onstad Lamb’s book “Hurt, Joy and the Grace of God” (Applecart Books, 2012) helped the world learn about “the hard work of truth-telling … and it’s been a gift to others in similar circumstances.”

Talton followed Lamb as bishop provisional and his tenure was about “rebuilding, reconnecting, and healing … and encouragement to be an inviting and welcoming presence in the wider community.

“Chet and [spouse] April have continually prodded, lured, and cajoled the people around here to try new things, and to reach out in ways that may seem scary or new, always for the sake of the other,” the presiding bishop said.

This next chapter with Rice “might be summarized, ‘look here and see what God is like, and if you can’t see clearly, look at what I do, and you’ll see what God is up to.’ This diocesan community is engaged in making those words and works evident – so that the world can see healing, reconciliation and good news in the flesh,” she said.

She also challenged San Joaquin Episcopalians to – in the words of former New York Bishop Paul Moore “’getup, get out and get lost!’ Get up your courage, get out there into the world, and lose yourselves in serving God’s world.”

Earlier in the day, Rice had shared a similar sentiment while preaching at St. John the Baptist Church in Lodi, about 40 miles north of Modesto.

Describing himself as a “missional bishop” he said: “What I will perpetually talk about and ask you about is, how are you engaging in the world beyond this lovely house of prayer?”

He challenged the congregation to think about what it means “to redefine for our lives what a neighborhood means, and the reality is that if we take the gospel seriously, if we take Christ’s life seriously, it [a neighborhood] is far more expansive and far more inclusive than perhaps we want to admit sometimes in our lives.”

Foundational themes of his ministry, grounded in the indigenous Maori people of New Zealand’s concepts of “manakitanga” (how you are received) and whakapapa (from whence you come), include extending hospitality not just to those who visit us in church, but broadening and expanding the concept of church, he said.

“From my perspective, church is everything as far as we can see,” Rice said. “It is where God is. The Gospel mandate invites us to join with God wherever God is and God is everywhere at the same time in the most ubiquitous sense.”

He recalled witnessing thousands of youth playing netball one Sunday morning while on his way to celebrate Eucharist at a church in the Waiapu diocese, a weekly occurrence, according to church members. Rice asked them, “What if some Sunday instead of gathering here, we gather there, and wear our T-shirts and offer bottled water to the people and we could be there and let them know who we are and we could expand our neighborhood.”

Several people were uncomfortable with the idea, he said, saying they preferred to be in the church building on Sunday morning. Others asked if offering water to the netball players would draw more people to church.

“That’s called ecclesio-centric, when everything is focused on this place, just on what happens here [inside the church building],” Rice said. “I’m saying expand your horizon that the church is this and more.

“If we do what Christ did. If we do what he invited us to do, you know what happens? We build relationships, we respond to needs, we go the extra mile … and those to whom we respond want to be a part of community and sometimes – not always – they do come.”

But “this is not evangelism,” he added. “This is something different. This is mission. This is being missional.”

On a personal note, Rice evoked laughter and applause when he told parishioners he’d attended a pub night fundraiser at St. Anne’s Church in Stockton the previous evening and that his former diocese shared a tradition with the Central California Valley diocese – both are located in areas of major wine production.

Born and raised in North Carolina, he said that both his parents have Cherokee ancestry and believes he may hold the record for most ordinations – five, including ordinations as deacon and minister in the United Methodist Church and later as deacon and priest and then as bishop in the Anglican church.

He was also a youth minister and added that he is “extremely keen to be involved in the lives of youth here any way I can.”

Patsy Lithco, 67, a St. John’s parishioner said she “fell in love with” Rice immediately. “I really liked his message about what we need to do outside these walls. He knocked my socks off. He is absolutely a keeper.”

Rice inspired hope for Jim Reeve, a St. John’s member for nine years. “He was very hopefully prophetic. That was probably one of the best messages I’ve ever heard, especially the part about getting outside the church. He made a passionate plea for us to do what the Lord has requested us to do.”

The Rev. Elaine Breckenridge, St. John’s priest-in-charge, agreed that Rice inspired hope. “I’m thrilled. It was such an inspiring sermon. He’s charismatic and a deep thinker at the same time. He will bring a level of hope to the diocese.”

After quite a long talk with Rice, William Bunn, 9, pronounced him “nice. He’s a really good friend. He called my vest a waistcoat and said it was dapper.”

Bishop Provisional Chet Talton appointed Rice an assistant bishop. Rice will begin making pastoral visitations in that capacity. If elected March 29, he will be immediately seated as bishop provisional of the diocese, making him the first active bishop to serve in that capacity since theological differences split the diocese in 2007.