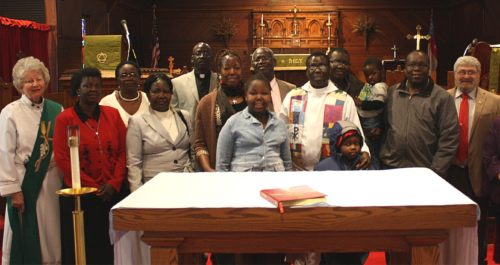 [Episcopal News Service] The observance of a Day of Prayer for South Sudan on Feb. 16 took on a very personal nature at St. John the Divine Episcopal Church in Moorhead, Minnesota. The congregation is predominantly made up of Sudanese refugees and their prayers were not just for peace in the war-torn country half a world away, but specifically for mothers, fathers, sisters and brothers — family members left behind.

Many wiped away tears as their vicar, the Rev. Michael Kiju Paul, himself a Sudanese refugee, prayed “Father, save South Sudan!”

Episcopal Church Presiding Bishop Katharine Jefferts Schori called for the Day of Prayer saying “the world is increasingly concerned over the rampant violence in South Sudan.” The Day of Prayer was also observed in the Presbyterian Church (U.S.A.) and in the Reformed Church in America. 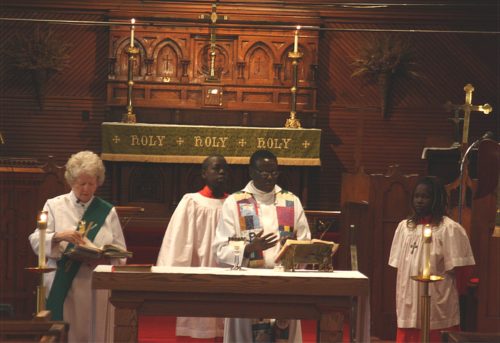 “I want to thank the presiding bishop for designating this day as a Day of Prayer for South Sudan. It means a lot to me and it means a lot to the Sudanese people here,” said Paul in an interview with ENS following the worship service. “We are badly hit and affected by what is happening back home. We weep for our country and the Americans here in our midst weep with us. The hearts of the members of this congregation are torn apart by what is happening back there.”

Massive loss of life and displacement
A 2011 referendum resulted in the division of the African country of Sudan into two nations —Sudan and South Sudan. The referendum was one of the conditions of a Comprehensive Peace Agreement signed in 2005 that brought an end to civil wars that spanned more than five decades. But peace has been fragile. Last year a division in the government of the Republic of South Sudan brought about the ousting of the vice president and fueled rising unrest within the army. On Dec. 15, fighting broke out in the capital city of Juba between rival tribal factions of the Presidential Guard. Within days thousands of members of the Nuer tribe had been murdered in Juba and the unrest spread to other regions of the country and took on an ethnic dimension.

The International Crisis Group estimates that more than 10,000 people have been killed since mid-December. The United Nations, which has observers on the ground in South Sudan, reports that hundreds of thousands have been displaced by the fighting and that 80,000 South Sudanese have crossed the borders in search of safety into neighboring Uganda, Kenya, Ethiopia, and Sudan. U.N. observers also report that nearly two-thirds of the country’s population is at risk of food insecurity.

On Feb. 10, the Anglican Communion News Service published a report from World Watch Monitor saying that scores of female church workers were raped and massacred in the South Sudanese town of Bor. The report quotes Episcopal Bishop of Bor Ruben Akurdit Ngong, who said that women had sought shelter in a church compound and that most of the churches in the diocese had been destroyed by rebel soldiers.

In her call to prayer, Jefferts Schori noted that the Episcopal Church of Sudan and South Sudan “is partnering with others on the ground in that work of peace-building.” Speaking in Moorhead following the prayer service, Paul said the church in Sudan “has been in the forefront, mediating and talking and attempting to bring the warring parties together to discuss peace.” He said that the church was also “fully involved in the war that brought us independence and has never left its people.”

“Right now, in the bushes of South Sudan, in the cities and towns, the church is standing up and really trying to bring these people together to bring peace and allow people to begin to rebuild that country that has been ravaged by war for over 50 years,” said Paul.

On Feb. 10, the South Sudan Council of Churches issued a statement from Addis Ababa, Ethiopia, the site of peace talks, saying that church representatives, including Sudanese Episcopal Bishop Enoch Tombe, were on hand to “accompany the peace talks with prayers and to deliver a prophetic message of peace from God and the people of South Sudan … ‘We want peace in our beloved land. We are tired of war!’” 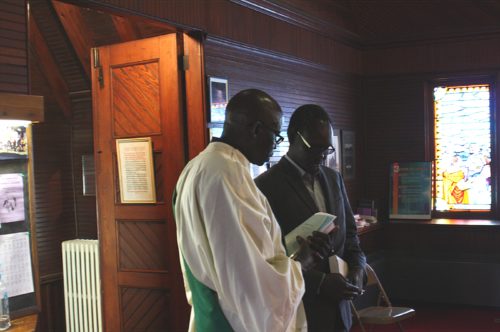 Remembering; praying; hoping
Emotions ran deep at St. John the Divine on Feb. 16 as prayers and memories focused on a homeland far away and left behind long ago – for some nearly 20 years.

Vestry member Helen Lodu was among the first Sudanese refugees to settle in the metropolitan area of twin cities Fargo, North Dakota and Moorhead, Minnesota in 1995. She said “the war was just so bad we had to get the children out of the country.” They lived in Kenya for two years before they found an opportunity to go to the United States and join her brother, who had previously settled in Northern Minnesota.

Lodu, whose husband recently returned from Sudan and witnessed the current violence first-hand, said it was sad to have been at war for so long, to have fought to gain independence and yet be back at “square one.”

She was nonetheless buoyed by the Day of Prayer.

“This day means a lot to me because I have never been able to go back to Sudan and see my people. I pray that God will listen to the prayers of all who unite themselves; that one day peace will come; that those who suffer can enjoy the land that God has given them; and we can go back.”

Another vestry member, Albert Simbe, fled Sudan with his late wife in 1998 and settled in Fargo-Moorhead. He said he has recently received reports from relatives in South Sudan about the violence that has erupted since Dec. 15.

“I really feel grateful that people in the United States are thinking about the suffering people in South Sudan. What broke out there on Dec. 15 is terrible, with thousands of people killed, displaced and suffering with no food, no water, no essential commodities. I am praying very hard that the peace talks in Addis Ababa will succeed. If they do not, as one rebel leader said, the country will crumble,” said Simbe.

“I am praying that Almighty God will be among them in the peace talks, so that they will agree and the country can be at peace,” he said.

Hospitality brings a change of character
Lodu and Simbe are but two of nearly 3,000 Sudanese refugees who have settled in the Fargo-Moorhead area. The influx started in the mid-1990s and gained momentum around 2000 when dozens of the Lost Boys of Sudan began to arrive. They were refugees who fled war-torn Sudan without parents, often alone and seeking asylum initially in neighboring countries to avoid being drafted into war. Many would eventually settle in locations around the world.

Many of the arriving Sudanese refugees were members of the Episcopal Church of Sudan and Episcopal faith communities in the United States rose up and stepped forward to provide assistance. One of those communities was St. John the Divine in Moorhead, a congregation of the Episcopal Diocese of North Dakota.

Barbara Glasrud, a 60-year member of St. John’s and its current senior warden, said on Feb. 16 that she remembers “vividly how it all started,” recalling a visit in the late 1990s from Andrew Fairfield, then bishop of North Dakota.

“He told us that these people were coming into our area; that they were Episcopalians and Anglicans; that they needed a church home; and that he would like us to welcome them. We did and the rest is history,” she said.

Glasrud said that in the beginning it was just a few of the Lost Boys. She recalls members of the congregation meeting them at the airport; helping to find housing, and for many basic clothing needed for a climate in sharp contrast to the deserts of Africa. Then, she said, families started coming and “soon we had a big population of Sudanese people in our congregation.”

Having changed the character of the Anglo congregation with Scandinavian roots that had worshiped in the historic church building since 1858, St. John’s called its first Sudanese priest in 2000. It was Lodu’s husband, Alex, who was ordained in the Episcopal Church of Sudan and was serving as a professor at a theological college in Mundri at the time of their departure. He served St. John’s for 10 years.

Paul arrived in mid-2013. He was ordained a priest in the Diocese of Kajo Keji in South Sudan and after settling in the United States served St. Luke’s Episcopal Church in San Diego, California for six years. When financial resources no longer allowed St. Luke’s to have a full-time priest, Paul sought employment outside the church.

Aware that there was a Sudanese congregation in the Fargo-Moorhead area, he found work in window and door manufacturing. He asked his bishop in San Diego to introduce him to North Dakota Bishop Michael Smith, who eventually asked Paul to volunteer at St. John’s.

“Father Michael seemed to fit right in,” said Glasrud, and in December the congregation called Paul to be its vicar, a part-time position for the timebeing.

Paul notes that without a Sudanese pastor, participation in the congregation’s three Sunday worship services – in English, Dinka and Arabic – had dwindled but have now started to revive.

He also said that members of the congregation will launch new efforts to educate the community and other congregations in the diocese about the issues surrounding South Sudan and invite them “to pray for our country.”

Paul will formally be installed by Smith at a Celebration of New Ministry on Feb. 22.