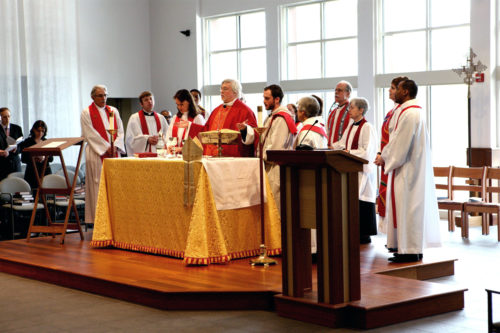 [Episcopal News Service] The Rev. Fanny Sohet Belanger loves to help people grow in their relationships with God. At the same time, she says, it is important not to be “trapped” in the church but to engage in mission and to reach out to people where they are. These are the principles that have guided Belanger’s spiritual journey, a path that led to her Feb. 1 ordination as the first French female priest in the Episcopal Church.

“My ministry is not to bring religion to people, but to enable them to craft their own theology and spirituality by helping them know their tradition and engage with the Scriptures,” she told ENS in a recent interview. “Prayer is very important to me and I consider it the heart of the church.”

Belanger, 38, was ordained by Bishop Pierre Whalon at Virginia Theological Seminary (VTS) in Alexandria, where she moved with her husband, Xavier, in August 2011 to complete a Master of Divinity degree. She was ordained a deacon at VTS in March 2013.

Whalon, bishop-in-charge of the Convocation of Episcopal Churches in Europe, described Belanger as a “candidate of extraordinary qualities [with a] very inviting, warm pastoral presence … She is a woman for all people.”

Belanger was born in Grenoble, France, and raised Roman Catholic. She discovered the Anglican Church in her early 30s and began attending St. Marc’s Church, a member of the Church of England’s Diocese in Europe. In 2011, she helped to launch an Anglican Eucharist for French speakers at St. Marc’s.

Belanger has studied philosophy and theology, and “always had a great desire to become a priest,” she said. “I admired so much our parish priest when I was a child. I was devastated the day my father told me I could never become a priest because I was a girl. I felt it was so unfair – and there was nothing I could do about it. But many years later, God found another way … I discovered the Anglican Communion and soon made my home there. For the first time I could talk about my sense of a call without being dismissed.” 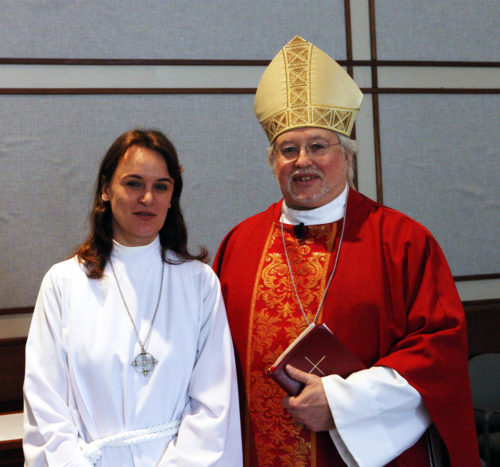 During the ordination sermon, Whalon said Belanger is “a woman of great gifts, among which is an ability to bring the Gospel to all kinds
of people. You are a fisher of people too. But before anything else, you must always make sure you are following where Christ is leading. It is easy to get caught in the ministry trap, where the priesthood is a career, and your gifts are what you use to advance.”

According to Whalon, Diocese in Europe Suffragan Bishop David Hamid felt that Belanger would be better suited to ordination in the Episcopal Church rather than in the Church of England. Belanger told ENS she had always felt drawn to the U.S.

English congregations were established on the Continent before the Reformation, leading to the formation of the Diocese of Gibraltar in 1842 and the Diocese in Europe in 1980. Meanwhile, after the American Revolution, American Episcopalians began worshiping from time to time at the American Embassy in Paris. As American interests developed in the 19th century, Episcopalians in various cities started congregations. Today, the Convocation of Episcopal Churches in Europe serves a culturally diverse demographic of Christians in some 20 parishes and missions throughout Austria, Belgium, France, Germany, Italy, Poland and Switzerland. Two other Anglican jurisdictions operate in Europe: the Reformed Episcopal Church of Spain and the Lusitanian Church of Portugal.

Belanger is currently serving as an intern at the Church of the Epiphany, in Washington D.C., where she works among the homeless, preaches, leads Bible studies, “yet most of the time, I just listen to people and try to be present,” she told ENS.

Before that she served for 18 months as a seminarian at St. John’s Church, Lafayette Square, also in the district.

Belanger said it fills her with pride and happiness to be the first French woman to become an Episcopal priest. While Belanger and her husband – VTS’s system and network administrator – plan to stay a little longer in the U.S., she understands that her ordained ministry will likely call her back home to France. In the meantime, she is hoping to find a new opportunity for ministry in the Washington D.C. metro area.

“It took a lot of work, boldness and faith to get me here – and also a lot of love and support from my husband and friends along the way,” she said. “But at the same time, I feel sad. Sad there are so many ministers here in U.S. and so few in France. Sad Christians in my country can’t find a priest to baptize their children and bury their dead. In France, lay people have so much to do with so little time and sometimes not enough education.

“I am sad such valuable people ‘cannot’ be ordained because the Roman Catholic Church won’t allow it,” she added. “I think people in U.S. don’t always realize the chance they have to have a real freedom to worship. Yet I am hopeful the Episcopal Church will be able to spread its mission in Europe.”

Whalon acknowledged that in France, Belanger would likely face some challenges as a female priest serving in a predominantly secular society and where the main Christian denomination is Roman Catholic. But, Whalon added, she has a special gift and an “ability to speak to French people who have a hardened shell without battering it down.”

Said Belanger: “We don’t need so many skills to become a priest, we need a heart. People out there are dying to be loved and to be understood.”