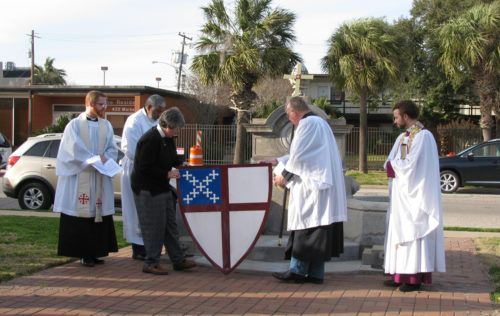 Episcopal leaders in Galveston gather outside the former WTEC building to symbolically place memorial items at the foot of the cross. Photo: Episcopal Diocese of Texas

[Episcopal Diocese of Texas] Galveston, Texas, Episcopal leaders gathered at the former site of the William Temple Episcopal Center (WTEC) on January 25, for the Service of Thanksgiving and Remembrance. In February, the Diocese of Texas will officially close on the sale of the property located at 417 Market St. and the community labyrinth will eventually be moved to Moody Methodist Church.

Founded in 1963, WTEC’s purpose was to serve the medical school students at the University of Texas Medical Branch. Over the years, the building served as a chaplain training, community center, and as the spiritual home for many. After Hurricane Ike hit in September of 2008, WTEC became the host of Texas Episcopal Disaster Relief and Development, a volunteer rebuilding organization that performed repairs on more than 150 homes and completely renovated 60 homes over the course of two years.

The remembrance service featured sermons from the Rev. Canon John Newton, the Diocese’s canon for Christian formation, and from the Rev. Susan Kennard, rector of Trinity. After finishing the liturgy in the the building’s chapel, the group of around 20 people gathered outside to symbolically place memorial items at the foot of the cross.

The Rev. Jeremiah Griffin now leads the WTEC at Trinity, which serves a free meal to students every Wednesday night, sometimes followed by “Theology on Tap,” a discussion of God and religion over coffee or beer at the local coffee house, two blocks from the church. The center is always open for students to study or pray.

“We really want to provide a place for students to connect their vocation as healers with their own personal faith and identity,” Griffin said in a November 2013 interview. “We want to give them the opportunity to theologically reflect and engage in conversation with their classmates.”

Naturally, the center and its activities focus around a Christian, Episcopal perspective, but Griffin says the students come from all faiths and traditions.

“Primarily, we are mission of hospitality,” he said. “All of the students are busy, regardless of faith. We try to keep it accessible and open to all people. At the Theology on Tap group, we will talk about a theme like hope or incarnation or transformation, and these are things that everyone can relate to with whatever their religious background provides.”

Fox 26 News, Houston, visited last summer to profile the work of the WTEC.

“It is all about relationship here,” Griffin said. “There is a need to be creative with theological reflection. My favorite kind is the subversive kind, when people don’t even realize it is happening. They just encounter a question, and then they leave the evening with a thought in their mind that maybe rattles around a little bit and hopefully prods them to connect it with something that they are doing.”

To learn more about the WTEC, you can find them on Facebook. Or you can email the Rev. Jeremiah Griffin (jeremiahcgriffin@gmail.com). The center is located at 2216 Ball St. in Galveston.