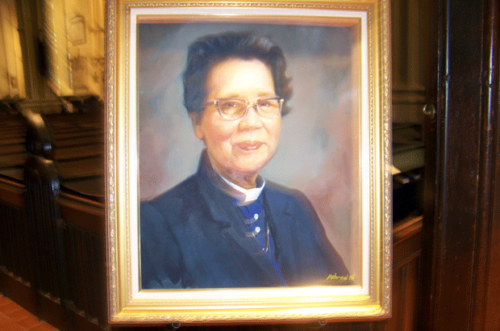 A portrait of Li on display at Toronto’s St. James Cathedral commemorates a “true saint of the church.” Photo: Diana Swift

[Anglican Journal] On Jan. 25,1944, as much of China lay in the iron grip of the Japanese invasion, the church marked a groundbreaking event. A fearless Anglican bishop, discerning a match between wartime need and a uniquely gifted person, ordained a humble yet steel-spined disciple of Christ into the priesthood. The bishop was Ronald Hall of Victoria and the ordinand was Hong-Kong-born Li Tim-Oi, the church’s first woman priest.

Later, graciously relinquishing her licence in the face of Canterbury-led reaction from the establishment, Li continued her ministry during the Japanese occupation and the Communist regime that followed.

On January 25, 2014, the 70th anniversary of the Rev. Dr. Florence Li Tim-Oi’s ordination was the leitmotif of a choral eucharist celebrating the ordination of women at Toronto’s Cathedral Church of St. James. Organized with the University of Waterloo’s Renison University College, which holds Li’s archives, and presided over by Bishop Linda Nicholls of the diocese of Toronto, the service honoured Li’s unwavering ministry during the war and the Cultural Revolution.

From Lambeth Palace, Archbishop of Canterbury Justin Welby sent greetings, noting that Li Tim-Oi “had been given the gift of priesthood” and that though she resigned her licence in the face of controversy, she never resigned her priestly orders but served God all her life.” Tim-Oi means “much beloved,” and Welby said she “was a gift to the worldwide Anglican Church and will continue to be much beloved for all that she did.”

Archbishop of Toronto and Metropolitan of Ontario Colin Johnson welcomed attendees and praised Bishop Hall for his visionary decision. Archbishop Fred Hiltz, primate of the Anglican Church of Canada, called the pioneering priest “a woman who is remembered for the Christ-like nature of her character.” He added that “she lived her vocation as a priest with such a faithfulness and quiet dignity that it convinced many across the Anglican Communion that the Holy Spirit works as wondrously among women as among men.”

Renison’s Chancellor Ralph Spence called her “one of the true saints of the church…a determined Christian who set an example.”

Reading a wartime excerpt from Li’s autobiography, Raindrops of my Life, Li Tim-Oi’s niece, Sze Sze Lee, revealed how her aunt felt compelled to preach the gospel of Christ no matter the circumstances.

With a choir gathered from several Chinese-Canadian parishes, the Rev. Philip Der of St. Christopher’s, North York and Richmond Hill, Ont., was cantor in a responsive singing of the Lord’s Prayer in Cantonese.

From the pulpit, Canon Judy Rois, executive director of the Anglican Foundation of Canada, called the occasion a day to remember “the hard work, resolve and dedication of women in the priesthood” and a day to “thank all those who helped us get here…who held our hand and dried our tears”—those who stood in solidarity with women when it was unpopular to do so.

With 38 years of women’s ordination in Canada behind us, the homilist recalled her time in the 1990s as the cathedral’s first woman vicar. Once, when filling in at a Friday mass, she began the liturgy with her back to a congregation of about 10. When she turned to face them for the Collect, not a soul remained to receive the sacrament. Had they left because of her gender, she wondered?

But her disappointments two decades into women’s ordination in this country were small compared with the obstacles faced by Li Tim-Oi, Rois said. Noting that there are now more than 700 women clergy in Canada and 35 women bishops in the Anglican Communion, Rois said that the story that began with women in our sacred scriptures, and continued down through the ages, is still being written today by women writing chapters in their lives and that of the church. “It is a better world when we all work and serve together as the body of Christ…a world where there is a place-card for everyone at God’s table.”