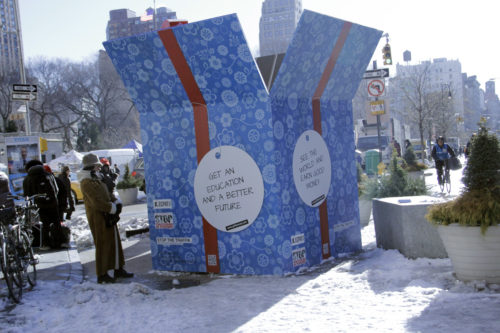 A U.N. GIFT Box, which looks like a gift on the outside, but tells the stories of human trafficking victims on the inside, is on display at 17th Street and Broadway across from Union Square in New York City until Feb. 2; it is sponsored by the United Nations NGO Committee to Stop Trafficking in Persons. Photo: Lynette Wilson/ENS

[Episcopal News Service] In the months leading up to Super Bowl XLVIII, Episcopalians in New Jersey and surrounding states have been gearing up, not for the big game, but for an influx of women and children who officials say will be trafficked into the region for sexual exploitation.

The dioceses of New Jersey and Newark have been hosting educational workshops and seminars at churches across the state, led by Episcopalians like Louis Cavaliere, a retired U.S. Navy captain who became interested in trafficking when he witnessed the “demand side” during active duty.

“I was sending people overseas, and they were engaging in this,” said Cavaliere, a member of Grace Church, Merchantville, New Jersey, in a telephone interview.

In 2000, the United States enacted the Trafficking Victims Protection Act, which defines sex trafficking as a “severe form of trafficking” in which “a commercial sex act is induced by force, fraud or coercion.”

In the Diocese of New Jersey, Cavaliere gave talks at churches that focused on the problem of human trafficking occurring alongside huge sporting events such as the Super Bowl.

“One Super Bowl after another after another has shown itself to be one of the largest events in the world where the cruelty of human trafficking goes on for several weeks,” New Jersey Rep. Christopher H. Smith said in an Associated Press article on the state’s efforts to curb sex trafficking before the Super Bowl.

The Seattle Seahawks and the Denver Broncos will play Feb. 2 in the Meadowlands, a stadium in northern New Jersey, in the Diocese of Newark.

“The Super Bowl will bring more glitz and glamour than perhaps any other event New Jersey has ever hosted. And, as Super Bowl history has demonstrated, it will bring more suffering and darkness — in the form of human slavery — than we can possibly measure,” said Newark Bishop Mark Beckwith in a Jan. 24 op-ed that ran in the Star-Ledger. “Most of us won’t see this evil. Most of us won’t know if it is happening in Newark or Nutley, Ho-Ho-Kus or Hackensack, or places in between. Any witness we can make, any awareness we can gather and any light we can shine has the potential to shut down some traffickers — and may provide an opportunity for some in slavery to escape to freedom.”

Human trafficking takes many forms: international adoptees, refugees and asylum seekers getting caught in traps, teenage runaways and kidnapping victims. An estimated 27 million people worldwide are victims of trafficking, with most being trafficked for labor and sex, according to the U.S. Department of State’s 2013 Trafficking in Persons Report . In 2012 alone, an additional 46,000 victims were identified, the most recent report says.

During the Diocese of Newark’s annual convention, Laura Russell, a lawyer and member of the diocese, gave a Jan. 25 presentation and workshop focused on human trafficking.

“It was a very good workshop yesterday, a lot of information and learning,” Martha Gardner, who serves on the diocese’s Justice Board, told ENS in an interview the next day.

After the workshop, clergy and laity wanted to know what further training might be available and what congregations could do locally to identify and assist victims, said Gardner, who also chairs the diocese’s Women’s Commission.

In other efforts, Episcopalians from the state’s two dioceses have partnered with the New Jersey Coalition Against Human Trafficking to create awareness in communities across northern New Jersey and as far south as Atlantic City, training hotel managers, who later would train employees, to identify signs of sex trafficking and training truck drivers on how to look for signs that someone is being held against his or her will.

“Sex traffickers frequently target vulnerable people with histories of abuse and then use violence, threats, lies, false promises, debt bondage or other forms of control and manipulation to keep victims involved in the sex industry,” according to the Polaris Project, a nongovernment organization  that works against human trafficking and that runs a national hotline to report a tip, access resources, request training or receive referrals.

The New Jersey coalition also partnered with SOAP, or Save our Adolescents from Prostitution, to place bars of soap, wrapped with a red band that gives the National Human Trafficking Hotline number, in hotel rooms.

“The Super Bowl was an opportunity to highlight the issue,” said Gardner. For at least six months, she said, the diocese has been discussing human trafficking and putting together resources. “On Monday, Feb. 3, it will still be happening here.”

Other organizations also hope the Super Bowl will help them raise awareness.

A United Nation’s working group, the NGO Committee to Stop Trafficking in Persons, includes some 50 nonprofit organizations and a large interfaith presence, including Cavaliere; Lynnaia Main, the Episcopal Church’s officer for global relations and partnerships; and other Episcopalians. It has sponsored a U.N. GIFT Box in New York.

Beginning on Jan. 23, visitors to Union Square passing along 17th Street and Broadway could see a big blue gift box with a red ribbon. The GIFT stood for “Global Initiative to Fight Human Trafficking.”

On the inside, the box told the stories of trafficking victims like 35-year-old Holly Smith, an American who, when she was 14 and already had been the victim of sexual exploitation, fell into the hands of a trafficker. And there’s the story of Sofia, a 20-year-old Mexican who was kidnapped in her country, brought to New York and forced into prostitution by an international trafficking ring. 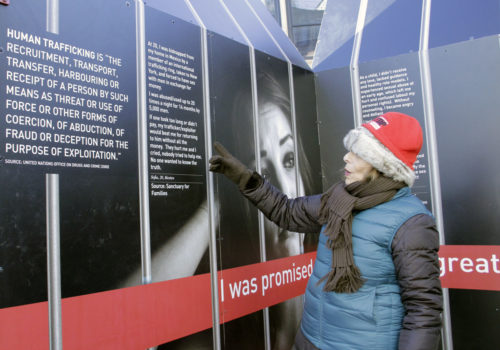 Rita Fishman, who represents the International Council of Jewish Women on the NGO Committee to Stop Trafficking in Persons, explains the origin and purpose of the U.N. GIFT Box. Photo: Lynette Wilson/ENS

The gift box concept first was deployed in London before the 2012 Olympic Games by the founder of Stop the Traffik, said Rita Fishman, who represents the International Council of Jewish Women on the NGO committee.

“You’re so intrigued by the paper and the ribbon, the whole feel of it,” she said during an interview with ENS on Jan. 24. “But, sadly, in the hands of someone who wants to deceive you …”

“The problem is, it’s a hidden population, and we don’t know who they are,” said Fishman. Box visitors’ reactions, she said, range from “I’ve learned a lot” to “I didn’t know this was going on here.”

“And when you tell them it’s happening in New York, California, Connecticut, they are incredulous … it’s amazing to learn it’s in your own backyard.”

Nationally, the U.S. Department of Justice reports that 100,000 to 300,000 children, average ages 12 to 14, are at risk for commercial sexual exploitation, a form of human trafficking, each year in the United States.

Since 2000, General Convention has passed resolutions condemning human trafficking, supporting trafficking victims and calling for churchwide public-education campaigns. In 2012, the convention passed a resolution calling for dialogue across provinces. (Episcopalians Against Human Trafficking have started a Facebook page.)

In March 2013, Presiding Bishop Katharine Jefferts Schori hosted a churchwide conversation focused on defining human trafficking and showing how it links with violence against women and girls. The event was held in conjunction with the annual meeting of the United Nations Commission on the Status of Women.

“I have seen an evolution since the churchwide conversation in March,” said Main, staff liaison to the subcommittee of the Executive Council Committee on the Status of Women. “One of the things we discovered is that there are lots of Episcopalians doing local work, [operating] shelters, educational awareness, going to hubs and administering Communion, social services and all the rest.”

On Jan. 17, Main helped facilitate a 90-minute call including some 35 people from the East Coast to Hawaii. Participants shared information, programs and resources on trafficking, victim rescue and awareness materials for schools, churches and communities, as well as discussed the upcoming Super Bowl.

“Human trafficking is a topic that is a concern to many parts of the church,” said Lee after the Jan. 17 call. Based on what participants shared, it’s obvious a lot of work is happening on the ground, she said. “For my committee, I want to be aware of that activity, to better know and network that work across the church.

“And we also want to support the work of OGR [the Episcopal Church’s Washington-D.C.-based Office of Government Relations] that interacts with policymakers in regard to legislation that impacts people who are trafficked, both citizens and internationals.”