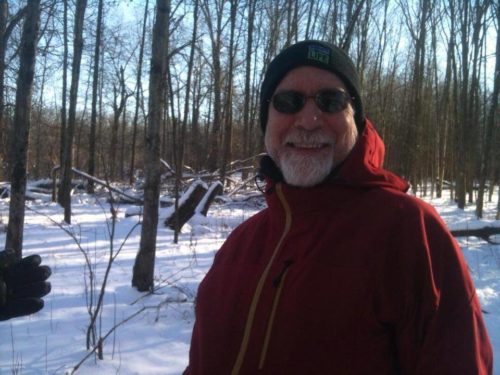 David Bird, 55, did not return from what he reportedly told his wife would be a short walk on Jan. 11, triggering a massive search and investigation that now involves the FBI. Photo: Facebook/Long Hill Township Police Department

[Episcopal News Service] Residents of Millington, New Jersey, have turned to the local All Saints Episcopal Church as a prayerful gathering place as they await word on the fate of a missing Wall Street Journal reporter who lives with his family near the church.

Local residents seeking out the comfort of All Saints is an outgrowth of the parish’s sense of call to what its rector describes as “community hospitality.” The nearly 110-year-old church about 38 miles from Midtown Manhattan follows “the old village church model” whose sense of caring for a parish extends beyond members of the church to all residents of the area, according to the Rev. Victoria Geer McGrath. 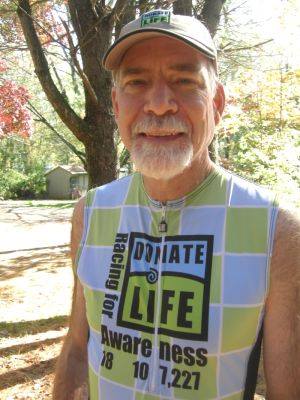 About 12 hours after David Bird, 55, did not return from what he reportedly told his wife would be a short walk on Jan. 11, McGrath was on her way to church for Sunday worship when she got a phone call from parish administrator Susie Harris telling her that Bird was missing and asking that she put him and his family on that morning’s prayer list. While McGrath was presiding at the 10 a.m. Eucharist, Harris was in her church office making missing-person fliers.

Bird covers energy markets, including OPEC, for the Wall Street Journal and has worked for Dow Jones for more than 20 years, according to a Journal report.

While the Birds are not members of All Saints – they worship at the Roman Catholic church in town – they are well known to All Saints members, and not just because they live in the neighborhood. David Bird serves as the troop committee chair for Boy Scout Troop 56 of which All Saints is the chartering organization and Nancy Bird leads a Girl Scout troop that meets at the parish. David Bird has helped connect the Boy Scouts with All Saints service projects. For example, scouts always help set up for the church’s large annual outdoor rummage sale.

“Just kind of being good neighbors together,” is how McGrath described the relationship in an interview. 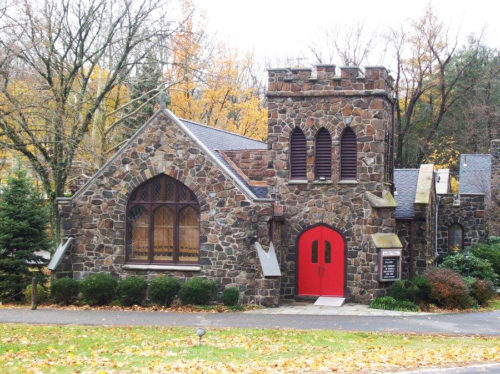 All Saints Episcopal Church in Millington, New Jersey practices “community hospitality” and recently became a center for prayer as the surrounding community awaits word on the fate of a missing Wall Street Journal reporter who lives with his family near the church. Photo: Facebook/Long Hill Township Police Department

The Birds’ daughter and son, a middle schooler and a high schooler, are friends with many children in the parish, she said. After confirmation class the day after Bird went missing, All Saints high school members searched for Bird in some of the areas where they knew he liked to run and hike.

The parish’s relationship with the Birds is a long-standing one. When David Bird needed a liver transplant nine years ago, All Saints members contributed to a fundraising effort.

On Jan. 13 – a day during which All Saints was the site of a funeral and reception for a six-year-old member of the parish who died of cardiac arrest – McGrath got a call from a parishioner who was trying to connect a friend of the Birds with Harris. The Birds’ friend reported that Nancy Bird was “completely overwhelmed” with offers for help and that all she wanted people to do was to pray that her husband will be found and can come home.

Because so many community activities happen at All Saints, the friend’s “first thought” was that that would be the place to have the service, she said. McGrath agreed to host the service and then learned they hoped to have it that evening. Church and community members pitched in to make the service happen after people saw announcements on the church’s website, Facebook, and a telephone tree run by the Boy Scouts.

Close to 200 people gathered that evening outside All Saints, which sits prominently at a five-way intersection. Luminaries lined the triangle of All Saints land, the Scouts came in uniform and two of them were the readers (reading Isaiah 40:28-31 and 1 Corinthians 13:4-7).

That service was followed by a quieter prayer vigil at All Saints on Jan. 18, marking a week since Bird’s disappearance. Harris, the parish administrator, suggested that the church announce it would be open for prayer between 4-5 p.m., the time when Bird left his home for his walk.

Most of the 40 people who came were not parishioners. Those folks said they “felt like there was a place to put their anxiety and their worry, and also their sadness because a week out people were feeling like this may not go the way we hope it would go,” according to McGrath.

All Saints sent the Jan. 19 altar flowers to Nancy Bird. That gesture followed up on McGrath’s call on Nancy Bird the day after David went missing.

But the rector said she has been trying to be clear that All Saints is not seeking to usurp the pastoral role of the Birds’ parish priests.

“This was really all driven by the wider community coming to us and asking for a response, which we’re glad to do,” she said.

Nancy Bird has said that the couple was putting away Christmas decorations when her husband said he wanted to take a quick walk before an expected rainstorm. He left the house at 4:30 p.m. and didn’t take his phone. It has been reported that Bird, a marathoner, frequently hiked in an area near his home called the Hicks Tract in the Millington section of Long Hill Township, New Jersey. The area is near the Passaic River, which flooded some backwater swamps after a large downpour later that day. It was in the midst of that storm when Bird did not return home that his wife reported him missing.

David Bird was recovering from a gastrointestinal virus the day he went missing, according to his wife. He is a liver-transplant recipient and takes medication twice a day. His wife has said he could become ill without the medication.

A massive search effort began shortly after Bird was reported missing and has included personnel from surrounding municipalities, along with the New Jersey State Police, on foot, horseback and all-terrain vehicles, and in the air. Divers have searched icy waters and others walked railroad track. Authorities have also reviewed footage from business and resident surveillance cameras in the area in hopes of spotting Bird. They have also asked residents and business owners to check any place on their properties where a person might take refuge.

The Federal Bureau of Investigation confirmed Jan. 20 that it was helping the Long Hill Township Police Department in its search for Bird, FoxNews.com reported.

First Assistant Morris County Prosecutor Thomas Zelante told ENS on Jan. 23 that the police department “continues to receives leads from various independent sources around the region and the department is taking all leads seriously and following up on the information.”

Meanwhile small teams of searchers are retracing previously searched areas to help ensure that clues have not been overlooked, he said. Those searchers are not looking in any new areas, Zelante added.

Meanwhile, despite a massive snowstorm on Jan. 20 and 21 and dangerously cold weather since, the effort “has not changed from a search and rescue” operation, he said.

Bird is described as white, 6 feet 1 inch tall and weighing about 200 pounds. He is partially balding and has a gray beard. He was last seen wearing a bright red rain jacket with two yellow zippers. 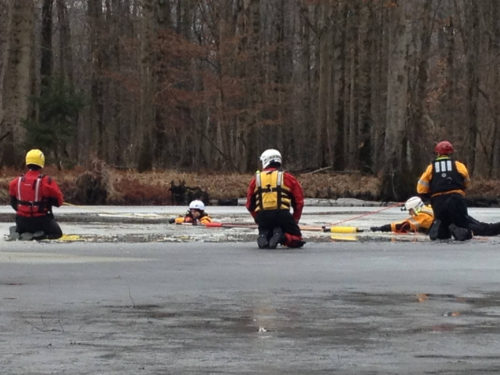 While it might seem obvious that Bird’s neighborhood church would be a place to which people turn in a time of crisis, it is also true that All Saints and McGrath have focused on fostering connections with the wider community. She traces the effort to 2007 when the parish decided to close its pre-school nursery because of declining enrollment. The school had met in the separate parish hall building so the parish had to “think and pray about how God wanted us to use the parish house,” McGrath said.

During that discernment the parish realized that its parking lot was heavily used and needed repaving. They saw that neighbors used the lot for overflow parking, especially when they had parties, and that it is a school bus stop as well as a place where younger kids meet to walk to the elementary school. It is also the place where many teenagers get their first driving lesson and learn how to park, McGrath said. Truck drivers and utility workers often pull in during the day to eat their lunch.

A parishioner offered a $20,000 challenge grant if the parish could raise a comparable amount within six weeks. “So we went to the neighborhood” and the resulting donations, plus those from parishioners, along with a fish-and-chips dinner and a car wash staged by the youth “more than met our match,” McGrath said. A bequest covered the remaining amount needed for the work.

“Beyond the money, what it did was it made us really engage with [the questions of] how is the resource of this property being used, how does it function in the community,” McGrath said.

Then the same donor offered to help make the parish hall wheelchair-accessible as a way for him to honor his recently deceased wife. That project has, among other things, allowed All Saints to go from hosting three or four small Alcoholics Anonymous groups a week to hosting nine, including a Friday night meeting specifically for young adults.

Converting the hall to such use in a town with little community space has been a ministry, McGrath said, adding that parishioners understand that hosting those AA meetings, along with other activities that invite AA members into the life of the parish, is “our primary community outreach.”

“It’s not just about offering the building; it’s about offering ourselves as hospitality and we’re always finding new ways of what that actually means,” she said. “One of the things we can do in this very polarized political environment is to build local community bonds so that when there is a concern or issue people already have those bridges that have been built.”

McGrath and the congregation are clear about why it practices community hospitality.

“As important as this kind of ministry is, we don’t do it because we think it will help our church grow,” she said. “I think there’s a greater vitality to our parish life but it’s not going to balance the budget. It’s not going to necessarily bring all sorts of new members; that’s not why we do it. The parish understands that that’s not why we do this. If people want to come and join us, that’s great. If they don’t, that’s fine too, but we are doing our part to make the kingdom of God a reality in our own community.”