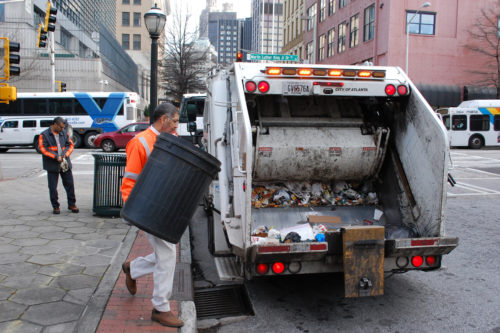 “Dr. King spent his last hours on earth advocating for garbage workers, and it only seems right that I mark his birthday by spending it with those in similar circumstances,” Bishop Wright said at the 7 a.m. roll call. 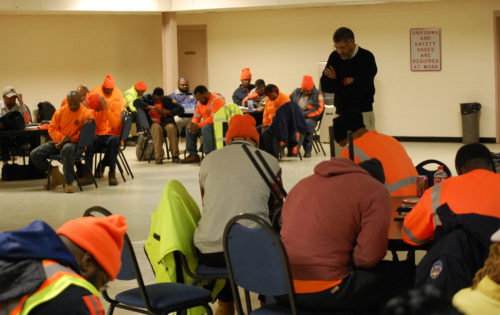 After speaking to and praying with workers, Wright joined a sanitation truck crew for several hours on busy downtown streets. He emptied garbage cans, rode  on the bumper of a truck as it went between stops, and learned how to work the truck’s compactor.

Wright is marking his tenure with events on the streets working with the poor and forgotten. Prior to his bishop ordination and consecration in October 2012 he washed and massaged people’s feet at the foot-health clinic operated by the diocese’s ministry to Atlanta’s homeless.

Wright’s commitment to engage with people about their everyday needs can be traced back to years he spent as a Howard University student working for the Children’s Defense Fund and the city of Washington, D.C.’s community centers.

“Church and religion aren’t just a Sunday thing; Jesus lived and worked every day among people whose lives were hard and who needed the presence of someone who cared about them,” Wright said at the workers’ pre-dawn gathering where three sanitation workers shared their life stories.

One of them, E. Nelson Williams, talked about an exhibit he developed and titled “Image Is” on the contributions of black Americans. Williams called on his colleagues to identify their own black heroes as a way of honoring Dr. King.

“The continued advancement of humanity is inevitably linked to our predecessors, who by example serve as inspirational reminders to persevere … for a brighter future,” Williams said.

Last fall Wright announced a plan increasing community-based ministries and refocusing the diocese’s permanent diaconate on the needs of the poor and other people living on the margins of society. 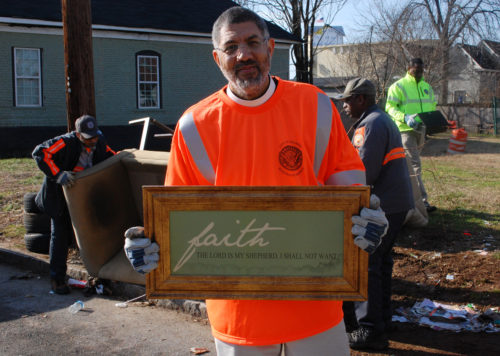 “The work of a deacon on behalf of the church in the world is too important to conflate with other tasks,” he said. “There is a ‘harvest’ in the world, Jesus has said.  The permanent diaconate, for our church, is the eyewitness and herald of this harvest.”

Currently the diocese, which consists of 109 worshiping communities in middle and north Georgia, supports ministries providing health care, food, workplace training and assistance to those dealing with abuse and mental illness.

— Don Plummer is communications consultant for the Diocese of Atlanta and is a member of St. Teresa’s Episcopal Church, Acworth, Georgia.