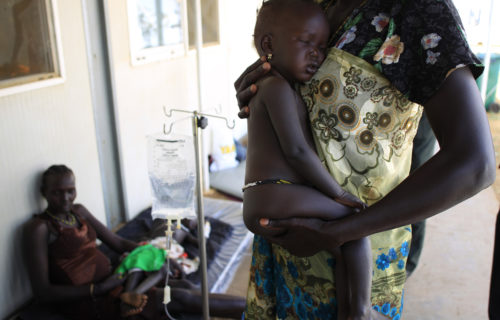 A displaced mother carries her sick child at a United Nations hospital at Tomping camp, where some 15,000 displaced people who fled their homes are sheltered by the UN, near South Sudan’s capital Juba Jan. 7, 2014. REUTERS/James Akena

[Episcopal News Service] A five-member group bound for a refugee camp in South Sudan has postponed its medical mission as a result of intense fighting that has killed an estimated 10,000 people and displaced 200,000 more in the fledgling east Africa nation.

The mission group, mostly Episcopalians from the Diocese of Colorado, had planned to visit Yida, a refugee camp in Unity State, South Sudan, home to upwards of 70,000 people who’ve fled the pre-existing violence that has for at least two years plagued the oil-rich Nuba Mountains region, an area mostly allied with South Sudan but under the control of the government of Sudan, to the north.

Yida, considered an outpost for Anglicans, lay and clergy, from the Diocese of Kadugli, is located in South Kordofan on the Sudan side of the border, where the Sudanese army and separatist rebel forces have engaged in armed conflict since June 2011.

In 2013, the Diocese of Colorado, which has a close, informal companion relationship with the Diocese of Kadugli, received a $26,625 grant from the United Thank Offering to carry out primary medical care training for women health workers from Kadugli at Yida.

“[The intention] was to begin to build a cadre of people to train other people,” said Anita Sanborn, a member of the mission group and president of the Colorado Episcopal Foundation, which is administering the grant for the diocese.

The mission group was scheduled to leave for South Sudan on Jan. 5 and to begin training at the camp, where many of the region’s displaced people come and go, on Jan. 10, but postponed the trip because of the most recent conflict.

Fighting erupted in Juba, the nation’s capital, on Dec. 15 following a political dispute between President Salva Kiir and his former deputy, Riek Machar. In the three weeks since, the fighting has spread to seven of 10 states and has created a humanitarian crisis in South Sudan.

The group plans to regroup and carry out the training in a different refugee camp serving Sudanese refugees, either in Kenya or Uganda, likely in March or April, once Bishop of Kadugli Andudu Adam Elnail, who himself has spent much of the last two years in exile and for the moment is in Colorado, returns to the region and identifies an alternative location.

Many of the people living in the camps are uneducated and don’t know general health principles, and when it comes to caring for newborns, the things you do in the first five minutes in the life of a baby that can increase their survival rate, said mission team member Dr. Michaleen “Mickey” Richer, a pediatrician with more than 25 years’ experience in global health, the majority of it in Sudan and South Sudan. 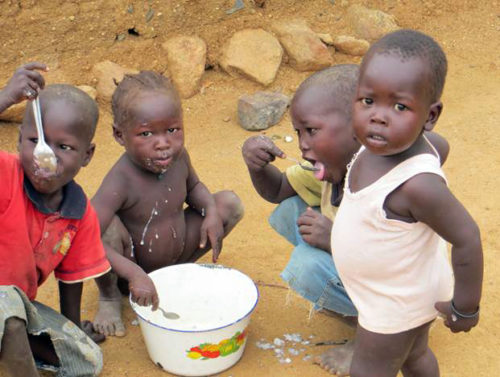 Bishop of Kadugli Andudu Adam Elnail took this photo of children in the Yida refugee camp in Unity State on his last visit to the camp.

The UTO grant will allow the mission team to empower women living in refugee camps and caves, where access to medical professionals is limited or nonexistent, with the basic health-care skills and hygiene skills needed for survival, according to the award summary.

“So often we see things on the news and we don’t know how to help, we feel hopeless; UTO is a daily way to participate in changing the world around us,” said the Rev. Heather Melton, UTO coordinator. “When you put coins in the [blue] box and give thanks for something good in your life, those coins go to help people who are out there on our behalf trying to transform unjust structures of society.”

The Episcopal Church of South Sudan and Sudan, home to 2 million members, has 31 dioceses — 26 of them in South Sudan, where it is one of the nation’s largest non-government organizations and has played a role in reconciliation in the aftermath of a two-decades-long civil war fought largely between the Arab and Muslim north and rebels in the Christian-animist south.

“The church in South Sudan is seeing the challenges of development,” said Elnail in a Jan. 8 telephone call with ENS, adding that it is operating with limited resources.

In addition to ministering to his people, who now are spread across Egypt, Uganda, Kenya, South Sudan and Sudan, the bishop has advocated peace and reconciliation, speaking out both in Africa and North America. The solution to the conflict, he said, “lies in political dialogue, not in fighting.”

The Diocese of Colorado has long supported Sudanese refugees, who began arriving in Colorado more than a decade ago. Many of the refugees belonged to the Episcopal Church of Sudan and found their way to diocesan churches, like St. John’s Cathedral in Denver, which is home to a Sudanese Congregation, said Sanborn.

When South Sudan gained its independence, the diocese shifted its focus from helping the diaspora to fostering schools, training in leadership development, and support for clergy in the newly developing nation, as well as engaging in advocacy efforts at home.

In addition to providing necessary assistance and training, it’s important for Americans and people of the Episcopal Church to bear witness and provide information for U.S.-based advocacy efforts, said Sanborn, who is a former board member of the American Friends of the Episcopal Church in Sudan, or AFRECS, as it is commonly known.

“I know as Americans we are really practical, and people often ask ‘what good does it do for you to go over and do two weeks of training?’’’ she said. “What is un-measurable is the hope that our presence stimulates in people who feel betrayed by their own leaders. We can bring a message to the people who are there to keep going, they will not be forgotten.”